Skip navigation
Retrieve a Quote My account
You are here:
30 Nov 2018

The government has announced investing millions into Britain's roads to address the pothole epidemic. But many believe that this won't be enough.

Have you had issues with potholes? let us know in the comments below!

The government has announced plans to spend millions of pounds addressing the woeful state of Britain’s roads.

But campaigners have warned that the £420 million earmarked for emergency pothole works in the recent Budget won't be nearly enough to tackle the problems caused by many years of underinvestment in the UK’s road network.

In his 29 October speech, Chancellor of the Exchequer Philip Hammond said he was making the extra cash immediately available to local highway authorities to tackle “potholes, bridge repairs, and other minor works”.

The sum is in addition to an existing £300 million fund that ministers have already dedicated to dealing with the same problems.

The Budget also contained provision to spend almost £30 billion on upgrading motorways and other major routes in England between 2020 and 2025.

Most of this money will go to Highways England, with around £3.5 billion to be made available to local authorities – but this will be ringfenced for spending only on the most important A-roads.

Campaigners and motoring groups responded to the news of the extra pothole cash by saying the new money was simply insufficient to fully address the problems drivers are facing on the UK’s roads at present.

"What we really need to see however is the same long-term funding approach applied to potholes.

“Extra money is always welcome but when it arrives unpredictably for one year at a time it does little to help the long-term planning needed to really attack the pothole problems drivers and riders see and feel every day.”

Figures published by trade body the Asphalt Industry Alliance (AIA) earlier this year suggest that the gap between what councils in England and Wales currently receive to fund maintenance works and what they actually need to keep their roads in reasonable condition stands at £556 million a year.

The AIA has also estimated in order to get our roads back into a “reasonably steady state” would require an additional £1.5 billion of government investment over a 10-year period.

“The additional funds announced in the Budget will go some way towards tackling the annual shortfall local authorities have in their highway maintenance budgets,” said Rick Green, chairman of the AIA.

“But it remains significantly less than the £1.5 billion extra a year we believe is needed to bring local roads up to target conditions so that they can be maintained in a cost-effective way in the future.”

“While the Chancellor’s announcement recognises the important role local roads play in supporting the economy and keeping communities connected, it's not enough to stop the ongoing decline of the local road network caused as a result of years of underfunding.”

Green said that the extra funds would hopefully be a “welcome first step” towards sustained annual increases in local road maintenance funding.

Read more: How to claim for pothole damage to your car 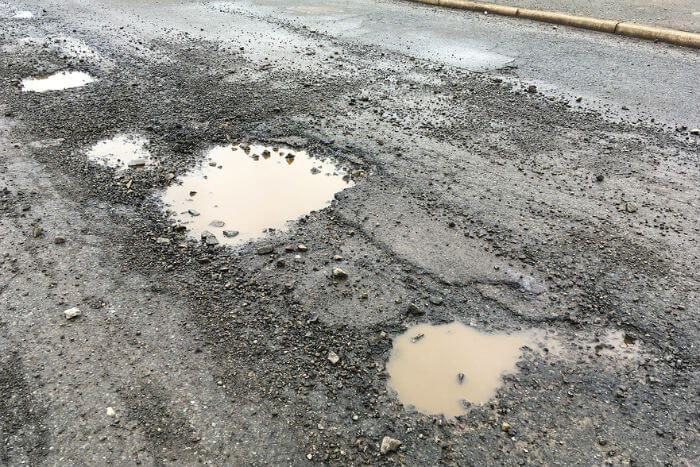 Numerous surveys have highlighted driver dissatisfaction with the state of the country’s roads in recent months.

In the summer, IAM RoadSmart published research which found that 47% of the organisation’s members had experienced vehicle damage as a result of hitting a pothole.

Almost nine in 10 respondents (88%) said that the condition of the roads in their local areas had become “worse” or “much worse” over the previous three years.

Meanwhile, research carried out by Confused.com found that the total combined depth of the 1 million-plus potholes currently found in the UK would be around 30km (18 miles).

This is three times as deep as the Mariana Trench in the Pacific Ocean.

Is the pothole problem in your area getting worse? Let us know in the comments and join in the discussion!

Have you had issues with potholes? let us know in the comments below!