According to road safety charity Brake, using a phone behind the wheel makes you four times more likely to have a crash. And your reaction times when using even just a hands-free device are 30% slower than your reaction times at the drink-drive limit.

Previously, a ‘legal loophole’ meant some drivers escaped prosecution when they used their phones to take photos or videos while driving. But the mobile phone laws tightened up on 25 March 2022. Here's what you need to know. 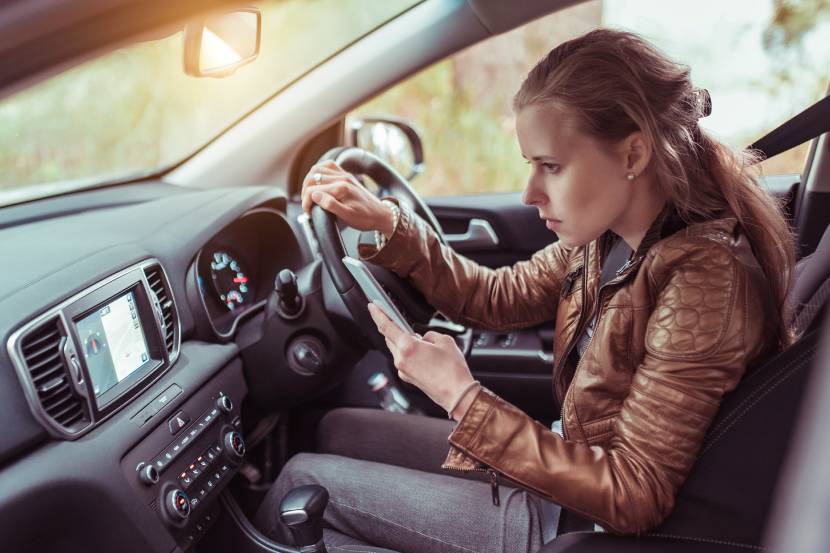 The only exception is if you’re using your phone while stationary to make a contactless payment, for instance at a drive through restaurant or toll road.

You're also able to use your phone ‘hands-free’. For example, you can use your phone as a sat nav if it’s securely fixed in a car phone holder and you don’t touch it.

But there still seems to be a sizeable amount of confusion about what is and isn’t legal. To clear things up a little, we put some questions to Rob Gwynne-Thomas, of the South Wales Police Road Policing Unit.

What’s the penalty for using my phone while driving?

If you’re caught using your mobile phone while driving, you’ll get six points on your licence. You’ll also be hit with a £200 fine – double the previous penalty.

If you’re taken to court, you face a fine of up to £1,000 and could be disqualified.

If you’re a new driver who’s passed your test within the last two years, you’ll automatically lose your licence.

Later on, when it comes to renewing your car insurance, you might see a hefty increase in your premiums.

And if you’re involved in an accident while you’re using your phone, you’ll find that your insurance provider might not cover you. So, even putting aside the risk to your own life and the lives of others, it could prove to be expensive for you, too.

In short, don’t touch your phone at all while you’re driving.

Can I use my phone as a sat nav while driving?

Using your phone as a sat nav is legal, but if you need to make any adjustments to the route or touch your phone you should pull over wherever it's safe and do this.

“Set the sat nav before you start your journey. If you want to change details or make any adjustments then find a safe place to stop first.”

You shouldn't touch your phone for any reason while you're driving, This counts as "using" your mobile phone and it's against the law. He goes on to say:

“Any physical interaction with it will be ‘using it’. Officers will also consider the alternative offences of not having proper control over a vehicle and driving without due care and consideration.”

Can I use my phone to play music while I'm driving?

You can use your phone to play music when you're driving. But you can't touch your phone to skip or change your songs. This would count as "using" your phone.

You're allowed to connect your phone to the bluetooth if your car has it. But you should do it before you start driving.

Once it's connected you can skip music with the controls on your car if it has this function.

Can I use my phone in the car if it's not moving?

You can't use your phone if your car is stationary, for example at a red light.

The law states that 'no person shall drive a motor vehicle on a road while using a handheld mobile phone or a handheld device of a kind specified by the act.'

“The key aspect here is the word ‘drive’. The terms ‘drive’ and ‘driving’ appear on numerous occasions in road traffic legislation. However, when someone is or isn’t ‘driving’ a motor vehicle isn’t clearly defined.

“There is a large volume of case law relating to this particular subject. The police will consider whether you have control of the steering and propulsion of the vehicle when making initial decisions.”

The recent update to the law mentions that you’re allowed to use your mobile phone while stationary to pay at a toll road or drive through restaurant.

But if you need to use your phone you should pull over safely and turn off your engine.

Can I use my phone if I'm teaching someone to drive?

If you're supervising a learner you should always put your phone away and be free from distraction while they're driving.

If you're caught on your phone while you're supervising a learner, you could be fined £200 and get 6 penalty points on your licence.

Driving instructors might use their phones or tablets to show visual aids to learners. If they're doing this, they should be parked in a safe space with the engine off.

Can I use my phone if I’m in the driver’s seat but the engine is switched off?

If you're safely pulled over and the car's engine is off then you can use your phone.

“There has to be a degree of common sense applied to the legislation. If you’re pulled over at the side of the road in a safe location with the engine off then yes, of course it’s fine.

“Again, the whole essence of the legislation is to ensure that while you’re ‘driving’ a vehicle you’re concentrating on the road.”

Is it illegal to use Siri or some other assistant app when driving?

Officer Gwynne-Thomas says that if you need to pick up the device and physically interact with it then yes, it is illegal.

He goes on to say:

“If you can access it purely by voice commands then no. However, always be mindful that you should always be in proper control of your vehicle.

“If you’re distracted by interacting with Siri then you could be committing other offences such as driving without due care and attention.

“Again, common sense and the circumstances will dictate this.”

Can I use a hands-free device in my car?

Hands-free kits aren't illegal, but they can still be risky.

In August 2019, the House of Commons Transport Select Committee said that hands-free devices carried the same risk of an accident as using a phone at the wheel.

Because of this, the committee urged the government to extend the ban on mobile phones to include hands-free devices.

“The whole essence of the legislation is that while you’re driving you should be concentrating on the road."

“Any actions that cause you to be distracted while driving are potentially dangerous and should be avoided.”

The new announcement on 19 November said that drivers can still use ‘hands-free’ devices like a sat nav if your phone is secured in a cradle.

But you should always take responsibility for your driving. You could be charged with an offence if the police find you’re not in control of your vehicle.

If I spot someone using their mobile phone while driving, should I report them to the police?

Officer Gwynne-Thomas says to report someone using their mobile phone to individual forces. But some use different reporting methods:

“In South Wales, we have introduced Operation SNAP.

We welcome the reporting of such instances, especially where it’s supported by dash-cam footage.”