Keyless car theft: what you need to know

Keyless cars are great to drive, but do they put you at a higher risk of theft? Here we explain what makes vehicles vulnerable to being stolen and how to keep your keyless car safe. 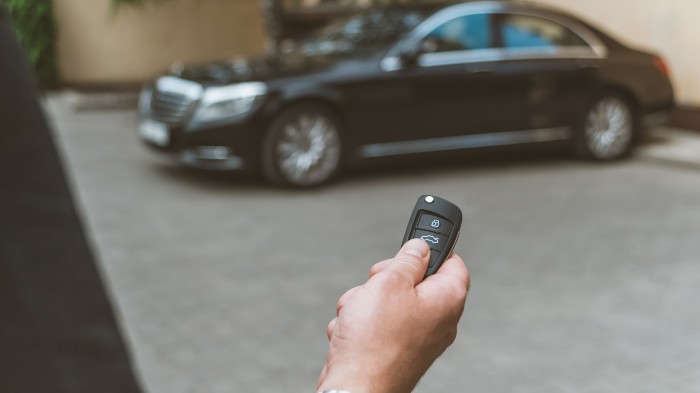 Police chiefs have warned keyless car owners are at risk, following a spike in thefts across the UK.

Criminals are using “relay technology” to access keyless cars and drive them away. If you’ve got a keyless access car, don’t panic.

Our guide explains why they could be vulnerable and some top tips for staying safe.

What is keyless entry?

Keyless entry cars have a clever fob that ‘talks to’ your vehicle when you’re in range.

The fob contains an identity chip, which emits a code, or series of codes, that are picked up by the car. These signals work over short ranges, usually less than five metres.

Instead of having to physically put your key in the ignition to start driving, you just need to have it somewhere on your person and you can get on the road.

While this is much more convenient and quicker than having to fiddle about with proper keys, it could mean that you’re at risk of keyless car theft.

Clever criminals have found new ways to target the technology and steal your car, which means it’s critical you take the right precautions.

Keyless entry cars do have risks attached, particularly from something called ‘relay attacks’.

Thieves work in pairs to steal cars that are parked close the owners’ homes. One stands outside the house with a special device that remotely receives the signal from the key fob.

The other stands next to your vehicle with a second device that receives the signal and unlocks your car.

The thieves can then drive away quickly.

This doesn’t mean that every keyless entry car is at risk, and some might be more secure than others.

When choosing a car, consider ones with better security measures. This includes upgrades like motion sensors, which are used by Audi, BMW, Ford and Mercedes-Benz.

Land Rover has fitted some of its cars with ultra-wide-band radio technology, which is designed to transmit over a wide range of frequency channels so that thieves can’t trace the code.

It’s also worth noting that if you have the kind of fob where you have to press an actual button to unlock your car, then you’re not at risk from relay theft.

But if your car is one of the more vulnerable makes and models then don’t worry - there are lot steps you can take to make it safer.

If you want to protect yourself from keyless entry car theft and save yourself a car insurance claim, there are sensible precautions you can take.

Storing your electronic keyless car fob in a faraday pouch.

This blocks the signal, which prevents would-be thieves from stealing your car while you sleep. You can usually pick a decent one up for as little as £5.

Make sure you test to see if your pouch or container works. You can do this by putting the key in it and walking up to your car and checking if it unlocks.

Check your owner's manual to see if it can be switched off completely.

If it can, make sure it’s switched off every night when your car is most vulnerable.

According to the office of national statistics, 66% of keyless cars are stolen between 6pm and 6am.  It might also be worth switching the fob off in the day for extra peace of mind.

Keep fobs, including spares, away from household entry points.

The further away the fob is, the less likely the thieves are to be able to pick up the signal. This includes keeping your keys away from the back door or windows.

Park in a well-lit area and make sure there are no valuables on display.

You don’t want to make your car even more attractive to criminals.

When buying a new car, ask if you can get a fob with a motion sensor.

The motion sensor detects when the fob has been stationary for a while, which triggers sleep mode. During sleep mode the fob no longer responds to the relay signals, protecting the vehicle from relay attack. Full functionality is restored when the owner moves the key.

Some manufacturers, such as Ford, offer a software update that installs the sleep mode onto a new key.

If you’ve got an older car it’s worth checking whether you can update your fob with a motion sensor.

“Part of the reason for the recent increase in vehicle theft is the rapid development in technology.

“The significant reductions in vehicle crime in the 1990s were achieved by police working with manufacturers to ‘design out’ crime with innovations like immobilisers, alarms and central locking. This approach is as valid today as it was then.”

Immobilisers are electronic devices that prevent the car from being started unless the proper key is used. Although it won’t stop criminals trying to break into your vehicle, they should prevent your car from being stolen.

Although seemingly obvious, it’s worth taking an extra two minutes to ensure your car is locked. Even if you’re only leaving it for two minutes while you fill up at the petrol station.

Traditional methods like steering locks/gearstick and handbrake locks also act as a visual deterrent for thieves, as well as adding an extra layer of security.

If you’re on the hunt for the safest keyless entry cars, then it’s worth shopping around and doing your research. Key things to look out for include motion sensors, which could significantly reduce the risk of your car being stolen.

Earlier this year, What? Car tested seven popular keyless entry card models to see whether they could be easily stolen.

It found that cars with motion sensors could not be stolen as long as the motion sensor technology was working. The cars tested that had this option included:

Cars that didn’t have motion sensor technology were found to be more easily stolen in the What? Car testing. These included:

Which counties in the UK are most at risk of keyless entry car theft?

According to Tracker, stolen vehicle recovery specialists, the theft hot spots in the UK are:

“While all motorists across the UK are at risk, our stolen and recovered theft data for last year reported that London had the highest number of thefts, followed by the West Midlands, Greater Manchester and Essex.

"Car owners living in these areas particularly need to be on their guard as we move out of lockdown in the coming months.”