Skip navigation
You are here:

Protect your car's value against depreciation

Get a Quote
Takes less than a minute

How much does gap insurance cost?

The cost of gap insurance depends on the type of policy you choose, the length of policy, and the purchase price of your car.

The table below gives you an average cost for each policy type based on a 3-year policy. Information is from Direct Gap.

We don’t offer a comparison for gap insurance, we have a chosen provider who offer cover which is powered by Direct Gap.

There are also a range of specialist providers who offer cover, so if you want to shop around and compare prices, you’ll need to visit them separately.

Most car dealers will offer gap insurance policies when you buy a car, but independent research shows it’s 50% cheaper to buy direct from an insurer, compared to a car dealership.

With Direct Gap you get:

What does gap insurance not cover?

In order to qualify for gap insurance, the age, mileage and price of the car must fall within a certain range and the car must feature in Glass’ Guide.

You should also note that gap insurance doesn’t cover taxis, private hire vehicles, cars and vans used for any other type of ‘hire and reward’, or vehicles used for racing, rallying or any other competitive event.

GET A QUOTE
Takes less than a minute

What is gap insurance?

Gap insurance is a stand-alone policy designed to bridge the ‘gap’ between the amount you paid for your car, and the amount your insurer would pay out in the event of a claim.

Insurers only pay the market value if your car is written off or stolen, meaning you could be left out of pocket. This type of policy is most commonly bought for brand-new cars because of how fast they depreciate.

Gap insurance ensures you don’t end up losing money. The actual amount of cover you get will depend on the level you choose when taking out a policy. 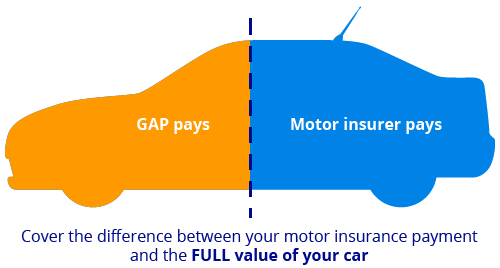 What are the different types of gap insurance?

There are three types of policies to choose from when you get a quote:

1. Vehicle replacement insurance (VRI) is suitable for second-hand cars, it covers the difference between the insurance pay-out and the cost of replacing your car to the same specification as when it was bought.

2. Return to invoice (RTI) is suitable for cars that were bought brand new. It pays the difference between the insurance pay-out and the original value of the car. If your car is declared a total loss, the difference between your insurer’s payment and the cost of your vehicle when you bought it is covered, including any outstanding finance.

3. Finance, lease & contract hire protects you in the event of your vehicle being declared a total loss. It’s suitable for HP, PCP, lease and contract hire vehicles. This type of gap insurance will pay the difference between the outstanding finance balance and the motor insurer’s settlement.

Is gap insurance worth it?

New cars depreciate quickly. Sadly, from the moment they leave the shop their value drops. Generally, a new car depreciates a staggering 20% per year on average.

If your car is declared a total loss, your insurer will only pay out the market valuation of £10,000. It’s unlikely that this’ll be enough to buy a newer equivalent model, leaving you to fork out for the £10,000 shortfall or settle for an older car.

Having gap insurance in place would mean you would get £20,000 in the event of a claim, £10,000 from your insurer and £10,000 from gap insurance. So you’d be able to get a new replacement without having to dip into your own pocket*.

Gap insurance could be worth considering if you’re worried about not getting the price you paid for your car back if it was written off or stolen. Or if you’re likely to be in negative equity if something was to happen your car.

*Return to invoice or vehicle replacement policies only.

Do you need gap insurance?

Gap insurance can be bought for new or second-hand cars up to 10 years old. It’s a common misconception that it is only used for financed cars. As gap insurance is an additional cost on top of your car insurance policy, it’s important to understand it so you can decide whether you really need it.

Reasons why you should consider gap insurance:

Reasons why you may not need it:

What you need to get a quote

We’ve partnered with Direct Gap who can provide you with a quote in less than a minute. All you’ll need to get a quote is:

You’ll then be given a quote for 3 different types of policies on offer. Choose the option that’s right for you and buy to start your cover.

GET A QUOTE
Takes less than a minute

Our handy guides to help you get the best deal on your next car.

Our most commonly asked questions about Car finance
FAQS

Looking for something else?

Confused.com's Gap insurance is provided by Direct Gap who are a trading style of Motor Gap Limited. Motor Gap limited are authorised and regulated by the Financial Conduct Authority under firm reference number 516846 and is a company registered in England with registration number 07109212, whose registered office is at Hawkstone House, Valley Road, Hebden Bridge, West Yorkshire, HX7 7BL. Confused.com is an intermediary and receive commission from Motor Gap Limited which is a percentage of the commission received by Motor Gap Limited.