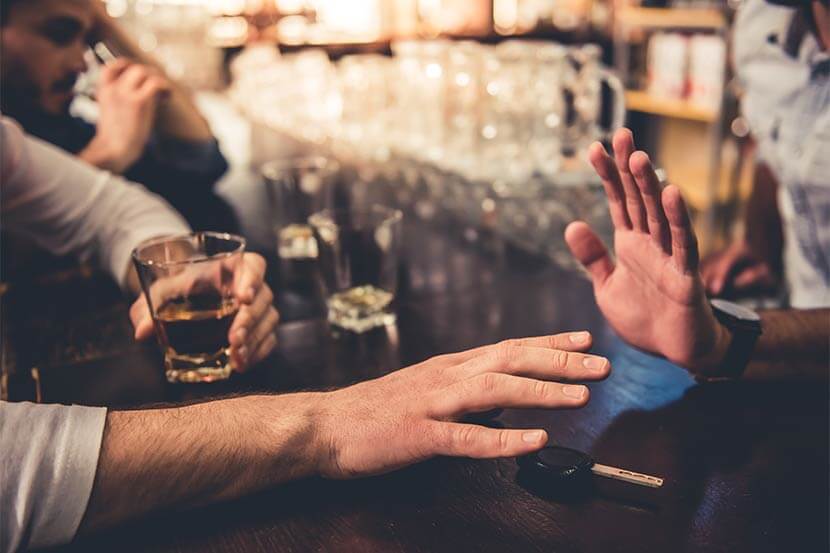 More than 1 in 5 (26%) think most drink-drivers don’t know when they’re over the limit. So there’s clear evidence that there’s confusion over the drink-driving limits. Here's what you need to know.

In England, Wales and Northern Ireland, you’re over the drink-drive limit if you have over:

In Scotland, these limits are lower and more in line with other European countries:

What's the drink-drive limit in terms of alcoholic drinks?

It's worrying that 1 in 20 (5%) think it’s safe to drink 4 alcoholic drinks and drive. But as a general rule, 2 pints of regular-strength lager or 2 small glasses of wine could put you over the limit. This equates to roughly 4.5 units of alcohol. For more information, check out our alcohol unit calculator.
But this isn’t a firm rule for everyone. Several factors contribute to how your body processes alcohol including:

So, if you’re wondering if you can drive after 2 beers, the answer is – it depends on a whole load of factors. And if there’s even a shred of doubt about whether you’re fit to drive, don’t.

How does alcohol affect my driving?

Alcohol slows down the function of the brain, causing a delay in your reaction times.

A slower reaction means the brain takes longer to receive messages from the eyes. So you aren't quick enough to spot potential hazards that could be life-threatening.

Alcohol also impairs your judgement and self-control. Processing information becomes difficult and you begin to take more risks as you feel a false sense of confidence.

All of these behaviours greatly increase your chances of a serious road traffic collision.

How long should I wait to drive after drinking?

You might think a good night's sleep is all you need to get the alcohol out of your system. Nearly a third (32%) assumed that the alcohol had worn off because they’d slept.  But that isn’t the case.

More than 1 in 5 (27%) said they’d driven the morning after a night out and still been over the drink-drive limit.

So how long should you wait to drive after drinking? Using our morning after calculator as a ballpark estimate:

A 13-stone person assigned male at birth has 3 pints of 4% strength lager at 11pm. This would put them over the UK drink-drive limit. It would take roughly 8 hours for it to leave their system, so they might be okay by 7:30 the following morning.

But having an extra pint means they need to wait until at least 10am the following day before getting in the car. If they're rushing to get to work and get pulled over by the police, they could still be over the drink-drive limit.

Though not a legal requirement in the UK, it’s a sensible idea to keep a breathalyser kit in your car. They’re  a quick and easy way to let you know if you’re over the limit.

Check prices for breathalysers on Amazon

Keep in mind that you still might not be safe to drive the morning after, either. You might feel fine, but there still might be enough alcohol in your system to put you over the limit.

Alternatives to driving after having a drink

Luckily there are plenty of ways for you to get home after a few drinks.

Temporary car insurance is one option. You can insure a sober friend or family member to drive your car home. You can get cover instantly, so you can make this decision fairly spontaneously. Just make sure that the person that’s driving your car is sober. You can get cover from 1 hour to 28 days.

The temporary policy cancels when the cover ends, so you’re not committing to a long-term policy either.

Another bonus of temporary car insurance is the cover is fully comprehensive. Your no-claims bonus is protected if something happens to your car too.

As well as public transport, sober friends and taxis, there are services like Scooterman who drive you and your car home safely.

The chauffeur arrives in a foldable scooter that’s stored in your boot while they’re driving you home. They’re also insured to drive your car so everything is above board and you don't have to worry about adding them to your car insurance policy.

You might be tempted to sleep in your car if you can't make it home. However, being drunk and in charge of a car is illegal, even if you aren't driving.

How would I be tested for drink-driving?

If you get pulled over for drink driving, the police have a right to breathalyse you if they suspect you've been drinking.

The breathalyser is a device used by police to tell whether you're above the alcohol limit for driving. To take the test, the police will instruct you to blow into the mouthpiece of the device for approximately 4 seconds. Usually when a beep sounds, you can stop blowing.

If you fail the road side breath test, you're taken to a police station and be asked to take a final test. If results come back over 50 micrograms, you'll be charged with driving under the influence (DUI).

It's a criminal offence to refuse to take a breath test without a 'reasonable excuse'.

What are the penalties for drink-driving?

The punishment for driving under the influence is quite rightly severe.

You could be banned from driving for a minimum of 12 months. If you’re convicted twice in 10 years, this goes up to 3 years.

You could also be put in prison for up to 6 months, and be forced to pay a hefty fine.

If you're stopped by the police an refuse to provide a specimen for them, you could get:

If you get a drink-driving conviction, it should be noted on your driving licence with a code starting with DR. This penalty stays on your licence for 11 years.

For more information, check out our guide on driving conviction offence codes.

Can you be drunk in charge of a bicycle?

What if you decide to cycle home after a night at the pub? What if you’re riding in a roadworthy mobility scooter?

The legislation for drink-driving applies to all ‘mechanically-propelled vehicles’ eg cars, motorbikes, e-bikes and vans.

However, bicycles aren’t mechanically propelled, and mobility scooters are exempt from most driving laws.

Neither require a driving licence, car tax or car insurance to use, and neither come under the same legislation that applies to cars.

While the strict laws around drink-driving don’t apply to cyclists, it’s still an offence to ride a bicycle ‘while unfit to ride through drink or drugs’ and comes with a fine of £1,000.  But the police are unable to demand a breath, blood or urine sample from cyclists.

As for mobility scooters, you’re required to follow the Highway Code when driving one on the road.

This means that drink-driving laws apply to you the same as a car driver.

For reference, Highway Code Rule 95 outlines how alcohol impacts your ability to drive, and that you shouldn’t drink and drive.

How does drink driving affect my car insurance?

If you’re in an accident while driving over the limit or unfit to drive through drink or drugs, your cover might be invalid. Most car insurance companies have a clause stating this.

This means that you aren't entitled to any payout from your insurer. And any other costs involved - eg a damage claim from another driver - would likely be your responsibility.

Having a drink-driving conviction might also mean you’re likely to see a sizable increase in your insurance prices. Some insurers might refuse to cover convicted drivers.

If you’re a passenger in a car with a drink-driver and you’re involved in an accident, any compensation you might be entitled to could be reduced.

There’s quite a lot of legislation and policy rulings around drink-driving, so let’s keep this simple: