Cheapest cars to insure in 2022

There are now plenty of insurance group one cars for sale that are not only great-looking vehicles but packed full of the latest gadgets and gizmos.

Of course, picking a low insurance car is only part of the battle when it comes to analysing the affordability and various running costs.

You also need to factor in the cost of car tax and the average miles per gallon that it can achieve. This could be particularly important if you’re regularly covering long distances.

We’ve crunched the numbers to find the cars with the cheapest car insurance, as well as the most affordable for drivers under 25 and new drivers. 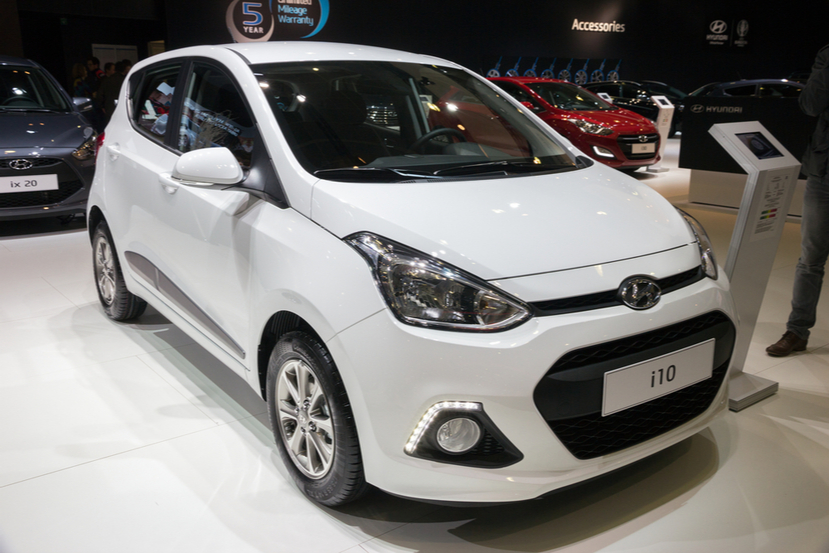 Who wouldn’t love this little city car? It has all the key benefits you want in such a vehicle:

Without a doubt it’s one of the better looking cars in its class. And  you can still drive one out of the showroom for a shade over £13,000.

The new models also boast an impressive range of technical features, including:

Get a car insurance quote for your Hyundai. 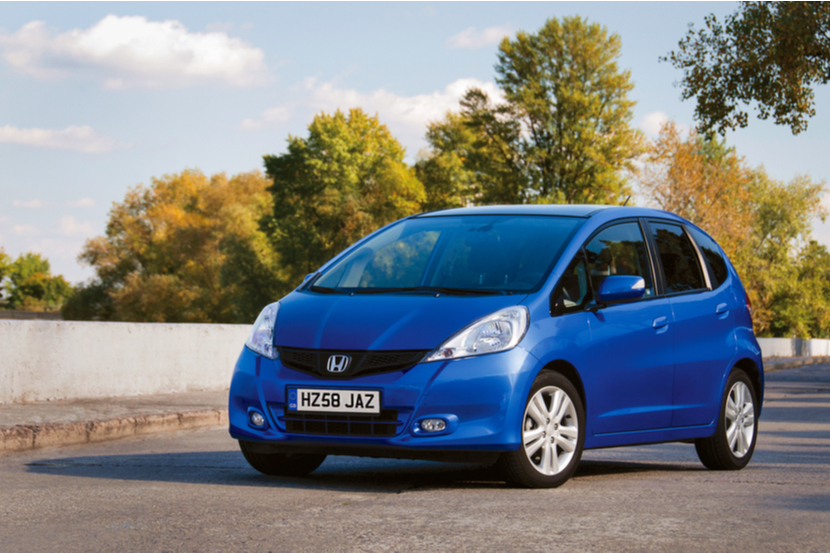 This is one of the new breed of superminis that have been increasingly popular over the last decade. And it’s not difficult to see why it has attracted a following.

The Jazz, which was originally launched back in 2008, comes with an impressive amount of space and practicality, wrapped up in an attractive shell.

The most recent incarnations of this car, meanwhile, might set you back from around £20,000 to £25,000 for the most equipped models. 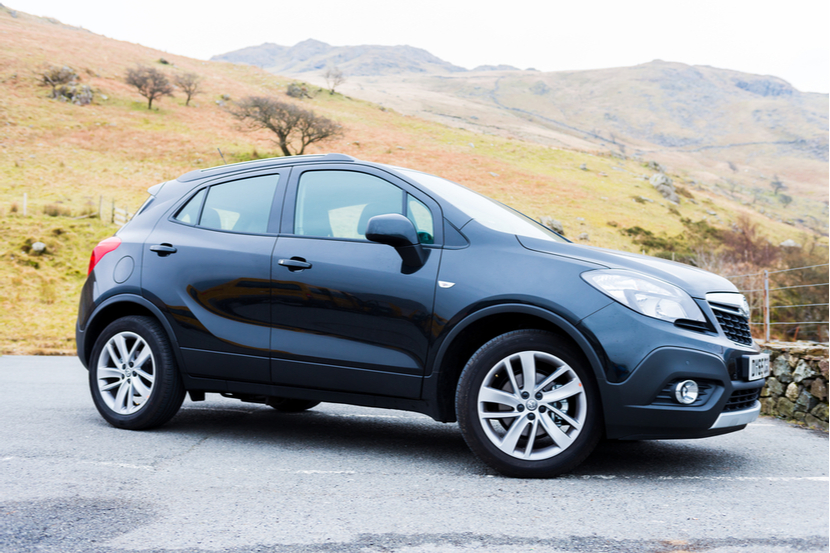 A solid contender from Vauxhall. The Mokka benefits from a decent level of standard equipment and economical engines. It’s also easy to drive so ticks most boxes for first-time drivers, too.

There are also plenty of used Mokkas available in the marketplace. You should expect to pay in the region of £13,000 for a 2018 (67-reg) version.

However, if you fancy one of the brand new Mokkas, which come with a sharp new design look, you’ll likely have to spend upwards from around £22,000.

Get a car insurance quote for your Vauxhall. 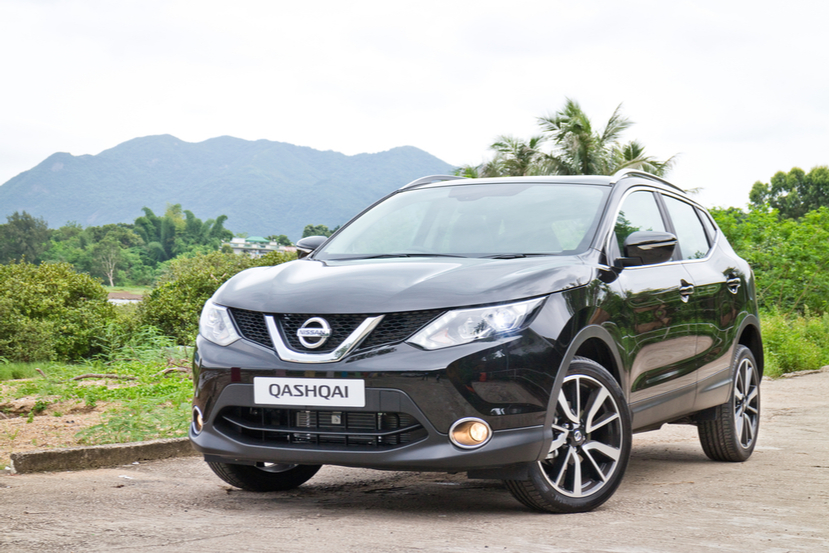 Ever since arriving on the scene back in 2007, the stylish crossover has received praise for being well-equipped, with great looks and handling.

The most recently arrived versions of the Qashqai continue the tradition, albeit with an updated look, including advanced Nissan Intelligent Mobility technology.

Get a car insurance quote for your Nissan. 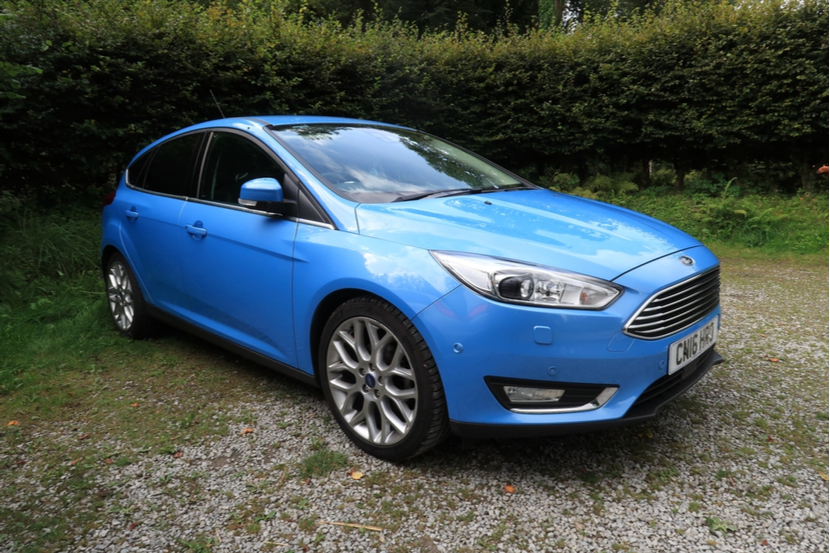 It’s not hard to see why the Focus has been one of the UK’s biggest selling cars for a number of years. It offers style, performance, plenty of room inside and acceptable running costs.

Its size makes it even more versatile than some of the city cars. This means it could fit the bill whether you’re after a fun car for yourself or a reliable family transportation machine.

A brand new Ford Focus costs in excess of £20,000. But there are thousands of older models from which to choose, depending on your budget.

Get a car insurance quote for your Ford. 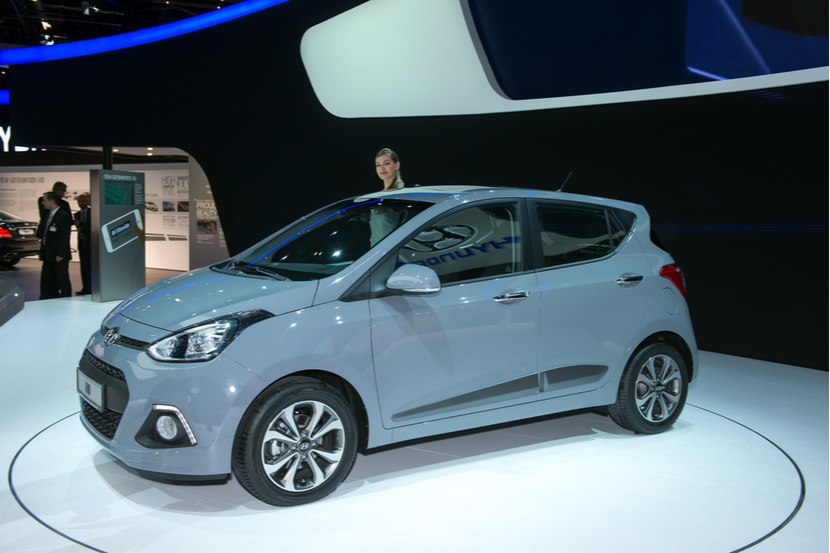 The stylish i10 is a great-looking, affordable contender. We found versions of this specification selling online for just below £4,000.

You’d be hard pushed to find fault with this run-around. It’s cheap, comes with a decent amount of equipment – and is also practical with a very useful five seats.

This combination of factors explains why they’ve sold in decent numbers. The good news is you shouldn’t find it difficult to find one on the open market.

7. Volkswagen UP! MOVE UP 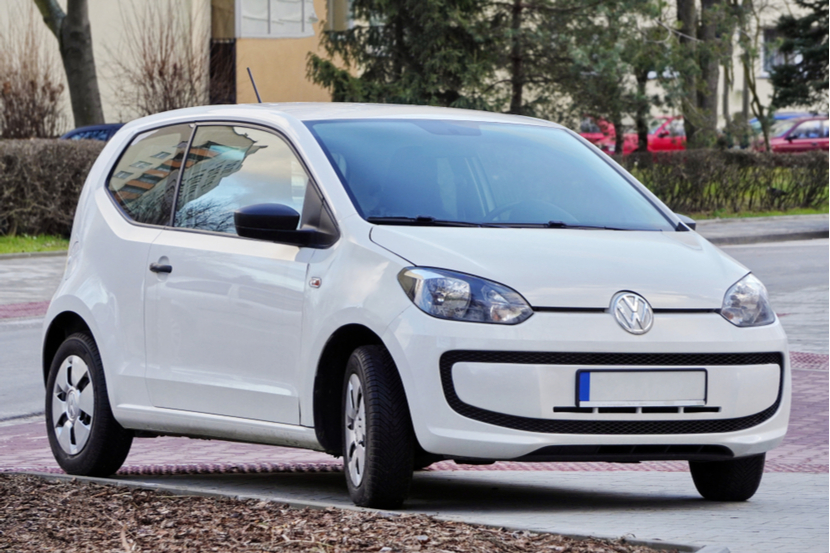 It’s hard to believe, but this cracking little car has been around for a decade. A hugely popular member of the city car club, it’s the perfect vehicle for manoeuvring around town.

It also benefits from VW’s enviable reputation for producing economical, spacious and fun machines that are as good looking as they are practical.

Get a car insurance quote for your Volkswagen. 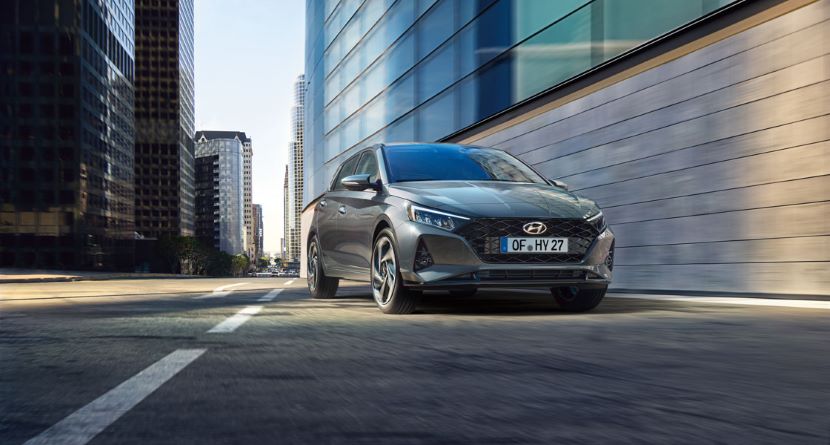 The new i20 is a rugged crossover with a decent amount of versatility., THis is thanks to its raised ride height and tough-looking styling touches. The Hyundai i10 insurance group is also on the lower end.

The price, meanwhile, is around £18,000, which comes with a five-year unlimited warranty, health checks, and a Hyundai Roadside Assistance.

However, there are plenty of older i20s available. And the fact that so many are selling for less than £4,000 makes them definitely worthy of consideration.

Based on at least 10,000 car insurance quotes by Confused.com from 1 January to 30 November. Comprehensive policies only, Confused.com only traﬃc. 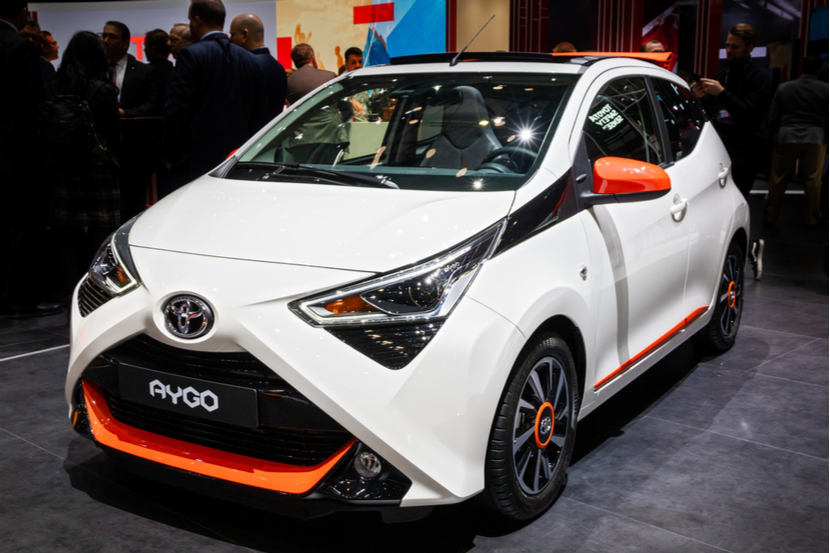 This is yet another striking looking city car with a bold, distinctive look. In fact, this is arguably the best-looking car in what has become an increasingly crowded marketplace.

A good quality used version with this specification with around 23,000 miles on the clock is likely to cost you close to £7,000.

If you’re looking for a new Aygo, there’s plenty of choice. The X-Play 5-door hatchback costs from £13,920, while you should expect to pay another £3,000 for the X-CLUSIVE version.

Get a car insurance quote for your Toyota. 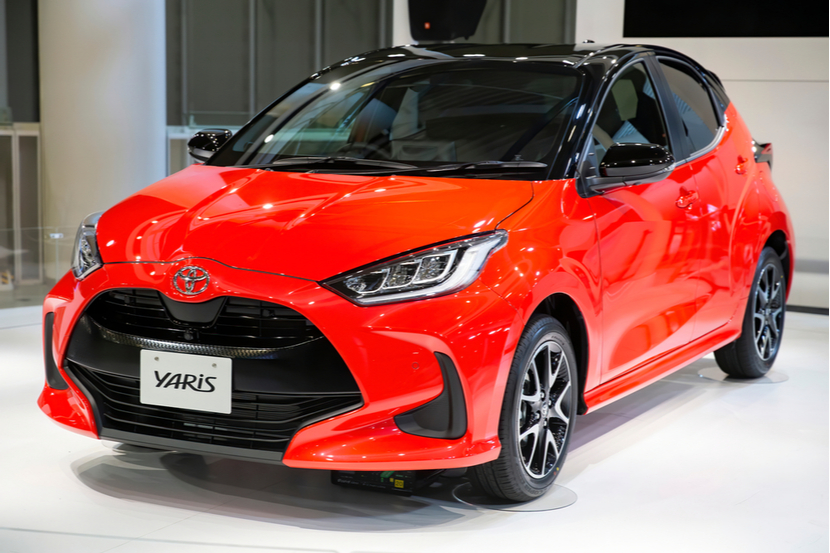 The Yaris is another vehicle that has been around – in some form or other – for two decades, having been constantly refined over time.

If you have the money to spend – and that’s around £22,000 - then consider one of the more recent Yaris models. These newer models  come with eye-catching finishing touches such as 16” black machined-face alloys.

Cheapest cars to insure for under 25-year-olds**

Our research also looked at what was the cheapest small car to insure for young drivers. Based on average car insurance premiums for drivers under 25, here’s our top 10:

The Fiat 500 Lounge, with a premium of £1,619.72, was found to trigger the most affordable premiums for those in the under 25 category.

Older versions of these cracking, fun little cars, whose origins actually date back decades, can be picked up for less than £3,000. This means it’s one of the best cars to insure for young drivers.

The sporty Ford Ka Zetec took second place in the list. This is one of the most distinctive small cars on the market today and is a low insurance car for new drivers.

It’s unsurprising to see a Fiesta make this list. They’ve  been one of the best-selling cars in the UK for years – and their size and relatively cheap running costs make them ideal vehicles.

What young driver wouldn’t fancy getting behind the wheel of the fifth-placed car in the list, the fantastic MINI One? This model  has an average premium of £2,063.71.

Next up – and slightly more expensive – is the Peugeot 107 Urban that would cost around £2,069.97 to insure. This car’s compact use of space means it has five doors and four seats.

As a result, it’s likely to be attractive to anyone that has to transport people around. It could be a contender for  university students transporting their friends to the summer festivals.]

Then you have the racier allure of the MINI Cooper with an average premium of £2,134.32. Nothing conjures up the image of the racetrack more than the historic ‘Cooper’ name.

The rest of the top 10 was filled with:

Based on at least 10,000 car insurance quotes by Confused.com from 1 January to 30 November 2021. Comprehensive policies only, Confused.com only traﬃc. Under 25 only

So, what are the cheapest cars to insure for new drivers? Our data highlighted cheap first cars in the UK that won’t cost the earth – but, equally, aren’t embarrassing to drive.

This is a particularly difficult age at which to secure car cover. As a new driver, car insurance companies are all too aware of the risks your inexperience might pose.

That’s why premiums could be substantially higher. Although, you could see if they can be reduced by agreeing to have a ‘black box’ installed to monitor how you drive.

The cheapest cars to insure for drivers aged 17:

As far as our research was concerned, top of the list came the Fiat 500 Lounge with a premium of £2,029.05 This means it’s one of the cheapest first cars to insure in the UK.

The Fiat 500 POP came next, while the Ford Ka Edge and Studio versions took the fifth and sixth place positions on the list. These are among the cheapest cars to insure for 17-year-olds.

The top 10 was rounded off by the Citroen C1 Vibe, Peugeot 107 Urban, Kia Picanto, and the MINI ONE. According to our research, this is the cheapest MINI to insure for a 17-year-old.

Based on at least 1,000 car insurance quotes by Confused.com from 1 January 2021 to 30 November 2021. Comprehensive policies only, Confused.com only traﬃc. Aged 17 only.

What makes a car cheap to insure?

There are a range of factors that go into working out the risk factor of a particular car. And the bigger the risk, the higher the insurance costs tends to be. These factors include its:

How can I make my car insurance cheaper?

Don’t forget that the particular car you drive is only one way young drivers can impact their car insurance costs. If you’re looking to slash your premiums, you could consider:

For more information, check out our tips for cheaper car insurance.

*Based on at least 10,000 car insurance quotes by Confused.com from 1 January - 30 November 2021. Comprehensive policies only, Confused.com only traffic.

**Based on at least 10,000 car insurance quotes by Confused.com from 1 January - 30 November 2021. Comprehensive policies only, Confused.com only traffic. Under 25 only

***Based on at least 10,000 car insurance quotes by Confused.com from 1 January - 30 November 2021. Comprehensive policies only, Confused.com only traffic. Aged 17 only.

All figures used here are averages and actual prices might be higher or lower depending on geographical and other factors.