There are loads of motorbike categories and styles, so it’s important to know what sort of motorbike you’re buying.

Here’s a rundown on the different motorcycle types, what they're designed for and how they're commonly used. 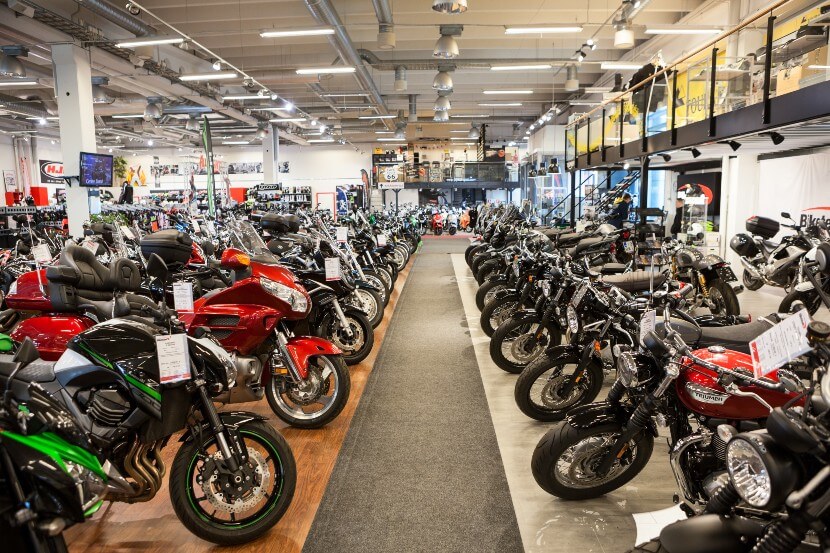 What are the different types of motorbike?

With all the different styles of motorbike available, it's easy to become overwhelmed.

Engine size, seating position, fairings or naked, the amount of information can overload the beginner.

A good starting point is to think about how you're going to use your motorbike. Long or short distances, the daily commute or a weekend biker.

And whether you're buying a new or used motorbike, you also need to be sure you have the right motorbike licence to ride it.

You also need valid motorbike insurance before you can get on the road.

With that in mind, let’s focus on the different types of motorbike.

Synonymous with the swinging 60s, scooters exploded back into popularity in the mid-90s.

With frustration at urban gridlock and cheap running costs, scooters made sense on our busy modern roads.

Italian firms Vespa and Piaggio played a part alongside new models from the big Japanese manufacturers .

Mopes are small engine 50cc motorbikes with a top speed of about 28mph. This makes them legal for 16 year olds to ride on UK roads.

As mopeds have such low power, moped insurance cover tends to be much cheaper than for other motorbikes.

Scooters describe a low-power motorbike with a step-through frame. They tend to have larger engines than mopeds – normally 125cc-150cc – and normally have storage under the seat.

Scooter insurance is often considerably cheaper than other motorbike insurance too, since a lightweight machine is unlikely to cause much damage to other road users.

At the other end of the scale, sports bikes are built for power and speed.

They have fast, powerful engines, sharp styling and handling, and aerodynamic fairings.

Sport bikes are built for speed and have blistering acceleration, and novice riders are unlikely to hold the right licence to ride one.

As you might expect, bike insurance in this class is generally more expensive than in other classes.

The term ‘naked’ refers to road bikes without a fairing to obscure the engine and frame, and normally no screen over the handlebars.

Removing the fairings makes the motorbike lighter and therefore faster and more manouverable.

However the aerodynamic advantages provided by modern fairings and screens probably mean the speed advantages are limited. It might 'feel' faster though!

Not all bikes without fairings are naked bikes. Exceptions include custom bikes, off-roaders and adventure sport bikes.

Although probably the most well-known, Harleys aren’t the only name in this category.

A range of Japanese bikes are able to provide that custom look for a lot less cash (although also less heritage).

Other cruiser makers include Italian firm Moto Guzzi and BMW.

Some cruisers, such as the massive Kawasaki VN2000, have larger engines than some mid-size cars.

Adventure bikes are designed to be endurance machines with larger luggage compartments and petrol tanks for long-distance trekking. Perfect for exploring some of the UK's best motorbiking roads.

They also often have the capability to do a bit of off-roading.

But be warned: taking a larger, heavier bike off-road can be a challenge for even the most experienced rider, especially if you drop it.

A tall profile and upright riding position mean you get good visibility over the car in front, and you should also be easier to see for other road users.

Combine this with long-travel suspension and good ground clearance you should be able to cope with the bumpiest of trails.

King of this class is arguably the BMW R1250GS, while Suzuki’s V-Strom 1000 is one of the more affordable big adventure bikes.

If you’re looking to ride coast-to-coast across the US or take a European tour, a tourer is the bike for you.

Designed for long distances, these are big, comfortable, mile-munching monsters.

These bikes are built for on-road comfort for both rider and pillion, with continent-cruising ability.

Specifically-designed tourers, such as the classic Honda Goldwing or the BMW K1600, even come with integrated sound systems.

Given their size, combined with their luggage and fuel capacity, it’s not surprising that tourers are among the heaviest bikes on the road.

To help with this, they often have features such as hill-start assist, and some have a reverse gear to help with parking.

Many manufacturers offer variations of their sports bikes or adventure bikes, that are labelled as sports-tourers or adventure tourers.

They often have side panniers for luggage which may be removable.

Dirt bikes, enduro bikes and motocross bikes are variations of motorbike that are primarily or solely used for off-roading.

There are hundreds of styles and variations of off-road bikes. These range from enduro bikes that are used for long distance off-roading through to trials bikes that are so lightweight they don’t even have a seat.

Many types of off-road bikes can’t be used on the road at all.

If you want to use yours on the road, you need to ensure it’s legal to do so first.

Motocross bikes are built for off-road racing and have suspension designed for rough terrain and large jumps. They have heavy duty frames to take the punishment of motocross courses.

Motocross bikes are rarely road legal and are only used for racing.

These lightweight bikes are fast and powerful. They can be used for different things, from touring to racing.

They also have tyres that can cope with surfaces ranging from dirt roads to rocks.

They look similar to motocross bikes but are heavier because they have extras – such as lights and a speedometer – to make them legal to drive on the road.

Honda released its first monkey bike in the 60s. Originally with a 50cc engine, the Monkey was a compact or minibike.

Its name came from the way it makes the rider’s knees and elbows stick out.

But while other manufacturers have their own versions, it’s the Honda Monkey that is still the king of this category.

Unless you speak to a Grom owner, that is.

Another Honda-manufactured mini-motorbike, the MSX125 is known in biking circles as the Grom bike.

Big-bike styling in a tiny size, the Grom has an almost fanatical following in the biking world, usually as a secondary motorcycle.

Highly manoeuvrable, it’s perfect for city riding. It also has massive torque that make it's limited speeds feel much faster because you’re that much closer to the road.

Usually used off-road or in competitions, quad bikes are a unique breed.

Whether it’s used for agriculture, modified for your own purpose or used for sports and leisure, a quad bike can be covered under quad bike insurance.

Given how different quad bikes are from regular motorcycles, there are a number of other factors to bear in mind.

You can get more information from the government’s website.

A three wheeled motorbike, or motor trike, is a larger motorbike that runs on three wheels instead of two.

Many motor trikes are built with components found in cars, and cars on three wheels also use parts found in motorcycles.

This can be confusing when it comes to insuring your trike.

In general, if your vehicle has an open chassis with handlebars then it should be considered a motor trike.

If it has a closed chassis or a steering wheel then you need to purchase a kit car insurance policy.

While it’s less common to see a motor trike on the roads, they’re popular with riders who are after something different.

They’re also a popular choice with those who can’t ride a standard motorbike, whether through age, injury or disability.

Unlike manual motorbikes that require a shift gear change, trikes can be run with automatic transmission.

Classic, antique, or retro, an older bike - usually between 20 and 25 years - can be great for occasional drives.

A classic's not generally a motorbike you rely on for everyday use, as engines tend to be smaller and have relatively low speeds. This does make them cheaper to insure in some cases.

Some of the most common classic motorbikes include the Norton Commando, Velocette Viper, and Triumph Bonneville.

Bobbers are recognisable because they’re usually stripped of most essentials including the front fender.

They have a shortened, bobbed rear fender instead, and a lower stance with any unnecessary extras removed.

First popular in the 1920s with the Harley Davidson’s ‘J’ Series V-Twin, they began to reappear over the last 20 years and in 2006 Harley launched the Street Bob.

Benefits of a bobber include the ability to strip back the bike and make it your own, and the fact it’s much lighter than other motorbikes.

What type of motorbike is right for me?

Whatever type of motorbike you ride, make sure it fits your lifestyle.

Will you be using it for commuting everyday, is it for touring holidays, or are you looking for something you occasionally ride out on sunny weekends?

When you’ve decided you’ll have a clearer picture about the kind of motorbike you’re after.

That Ducati Streetfighter might look the business with an engine that sounds like a pride of roaring lions. But 28kg of downforce at 168 mph doesn’t do you much good when you’re stuck in the traffic of a daily commute.

Buy a bike that suits your needs, is the right power and size and is not so heavy that you can barely lift it. You also need to factor in your budget, and the cost of motorbike insurance.

Making the right choice at the start means you’ll enjoy your motorbike that much more.

The cost of motorbike insurance depends on lots of different factors. There are lots of types of motorbikes to choose from and they all come with different insurance costs.

All motorbikes are put into categories by insurers and this directly relates to how much your premium could be.

But things like your own driving history, postcode, and where you keep your bike will also affect the cost.

Different types of motorbike are priced according to risk by insurers, with those that are a lower risk of being stolen or in an accident resulting in cheaper premiums.

How you use the motorbike makes a difference to the cost. If it’s for daily riding or you do a lot of miles, expect your premiums to be high.

If it’s only for the weekend when the sun appears, your insurance is likely to be a lot less.

Here's all you need to know to pass your motorbike test with flying colours.