Tailgating is one of the most hated driving habits, right up there with middle lane hogging. But it’s not only annoying – it’s dangerous. Everyone has an opinion on how to treat tailgaters. But what’s the correct way to deal with them safely? 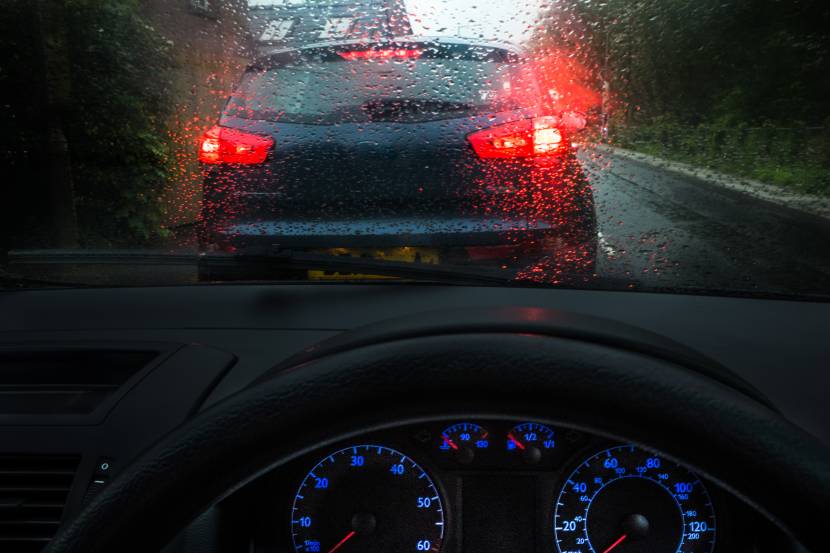 Tailgating means driving too close to the vehicle in front of you and it’s dangerous because it increases the risk of collision.

In fact, 1 in 6 (17%) drivers have experienced damage to their car as a result of tailgaters*.

More than 1 in 5 (22%) said they claimed up to £200 on their car insurance to fix the damage caused by tailgaters.

Unfortunately this could also push up your car insurance costs, even if the damage wasn't your fault.

The Highway Code states that all drivers should try and maintain a 2 second gap with the car in front. You should aim to at least double that gap in wet weather.

If you’re driving in snow and ice, increase this to a 20-second gap.

There’s a reason why people say ‘only a fool breaks the 2 second rule’. If the vehicle in front of you brakes suddenly you might not be able to stop in time.

Sometimes tailgating isn’t deliberate. Nearly 1 in 5 (18%) drivers admitted to leaving less than a 2 second gap between themselves and the car in front several times. Nearly 1 in 3 (29%) told us that they'd done this once or twice.

Yes, tailgating is a careless driving offence. Half  (50%) those we asked were aware of this, but 1 in 5 (20%) still admitted to tailgating at some point.

If you’re caught tailgating by the police you could land yourself a fine of up to £100 and 3 points on your licence.

If, however, your tailgating resulted in a serious accident you could get a driving ban or be sent to prison.

And points on your licence increases your risk as a driver. This in turn could see your car insurance costs go up the following year.

Why do people tailgate?

There are many reasons why people tailgate. In some cases it’s a bullying tactic - the tailgater might want to intimidate you and get you to move out of their way for example.

Or it could be that they’re in a hurry. Almost over 2 in 5 (45%) said that they tailgated because the car in front was driving too slowly - but this isn't an excuse.

Sometimes it might just be that a driver has ‘switched off’ and isn’t paying attention to the road. They could also be inexperienced and unaware of the danger they might be causing.

Another reason could be that tailgaters don’t think that they could be prosecuted.

Nearly half (48%) of drivers told us that they don't think it's easy for police to catch tailgaters, so perhaps tailgaters feel they can get away with it. More than a third (34%) believe that it should be taken more seriously as an offence.

How to deal with tailgaters

It's clear that the action to take around tailgaters is confusing.

Nearly a third (32%) told us that they hit their brakes when they experienced a tailgater. Nearly a quarter (22%) told us they increased their speed. Another 1 in 10 (10%) told us they even pulled a face in the mirror.

But how you deal with a tailgater depends on whether they’re  of the ‘passive’ or ‘aggressive’ variety.

An aggressive tailgater has the clear intention of passing you. They’re likely to actively drive up your rear in a fashion that says ‘get out of my way’.

A passive tailgater is a different beast entirely. Normally they have no real intention of passing you and instead are quite happy for you to take the lead, but simply drive too close.

This is most likely an unconscious choice. It could be that they’re not really concentrating, and not thinking about leaving a safe braking distance.

And as different beasts, they require different approaches.

How to deal with aggressive tailgaters

This one’s simple: as soon as you can, and it’s safe to do so, let them pass. That’s it.

Not everyone will agree, and aggressive tailgaters clearly press a lot of motorists’ buttons.

It can be tempting to hold them up, wind them up or think up tricks that make them mad or ‘teach them a lesson’.

But it’s just not worth it. No-one benefits and there’s nothing to be gained by doing so.

"The thing is with these drivers, they’re already aggressive. So they’re not about to back off.

"Anything you do to try and make them back off will just make them more unpredictable."

So not only is there nothing to be gained by getting your own back on tailgaters, but you’re potentially creating an extra problem.

Almost 2 in five (38%) of the drivers we asked said that the person tailgating them showed signs of road rage.

You could easily trigger this if you react to tailgaters, which is only going to make the situation worse. If you’re just further enraging the driver behind, it’s difficult to see how anyone’s going to win. Don’t feed the trolls.

How to deal with passive tailgaters

As much as it may be tempting to try and put some space between you and the car behind, you don’t want to create the same situation for the car in front.

If the car in front were then to suddenly brake you’ll end up the unwitting filling in a sandwich.

This is because if you repeatedly brake, the flashing of your brake lights might start to lose impact.

It’s better to slow down gradually with your foot off the juice.

Then, if you do need to brake suddenly, the brake light should hopefully prompt the tailgater to take some evasive action.

This won’t entirely eliminate the risk of getting rear-ended. But at least there might be less damage at a slower speed.

And, in the event of a car insurance claim or the police getting involved, you’re less likely to be found at fault.

"And there’s one last tip," says Rodger. "Don’t be a tailgater yourself." After all, only a fool breaks the two-second rule.

*Figures taken from omnibus research carried out by OnePoll on behalf of Confused.com. This was a nationally-representative poll of 2,000 UK adults. The research was conducted between 8 April and 13 April 2022.