Drug driving and the law in the UK

You probably know that drug driving is illegal in the UK, but did you know that prescription medication could impact road safety too?

Research from the charity Brake reveals that drug driving is a factor in one in 20 fatal crashes. 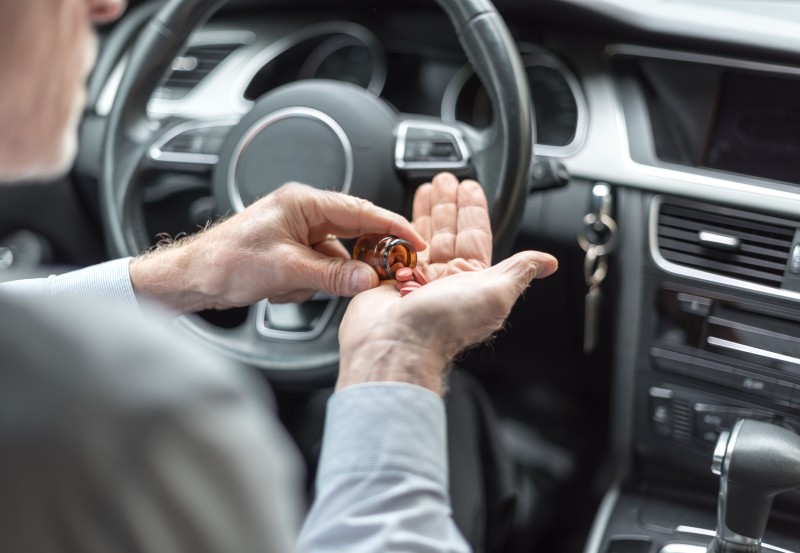 This is a worrying stat. So why are people taking the risk?

The effects of drugs on driving

Drugs affect drivers in a number of different ways.

Some of the more minor effects include:

And of course, the effects could be serious and last for hours, even days.

In 2012, the government set new limits on illegal and medicinal drugs in the body.

The government identified 8 drugs as being most associated with illegal use. They also identified 8 medicinal drugs that had the potential to impact on driver ability. These include sleeping pills like Temazepam and painkillers such as Morphine and Lorazepam, which is often used to treat anxiety.

Drug driving limits were set for both groups. The threshold for the 8 illegal drugs was set purposely low to enforce a zero-tolerance approach.

In 2015 the list was updated to include amphetamines too.

The threshold limit for amphetamine is higher at 250ug/L to reflect its medicinal use.

How do different drugs affect my driving?

There are three main types of drugs that can have significant effects on your driving:

Cannabis is a depressant and works like a sedative. It slows reaction times as well as the user’s perception of time and distance - a bad combination for somebody behind the wheel. Brake claims that experiments with driving simulators show that a driver that has taken cannabis is less able to steer the car properly and is slower to react to a car pulling out.

Opiates such as heroin, methadone and codeine can cause drowsiness, mental confusion and visual impairment even with a low dose. Your reaction times are also reduced.

Cocaine is a stimulant and often makes the user feel over-confident. As a result your driving is likely to be erratic. You might take greater risks, including high-risk manoeuvres and driving at high speeds. At the end of a night on cocaine a driver might also feel sleepy and suffer from poor concentration.

Ecstasy (MDMA) makes your heart beat faster and can often result in a surge of adrenaline. This will likely make a driver over confident and impulsive which invariably leads to higher levels of risk taking. A person on ecstasy might suffer anxiety, panic attacks, paranoia and psychosis which all impede driving ability.

LSD is a hallucinogen, along with other recreational drugs like magic mushrooms Users often feel that time is speeding up or slowing down, making it hard to judge their own driving speeds as well as those of other vehicles on the road. Colours, sounds and vision might be distorted too, adding to an overwhelming sense of confusion and disorientation.

Can the police stop and drug test you for no reason?

The police can stop any driver that they judge to be under the influence of drugs.

If stopped for drug driving in the UK, you’re likely to be asked to complete a ‘field impairment assessment’. This usually involves being asked to walk in a straight line or counting while standing on one leg. Your pupils might be checked too.

Roadside drug testing kits might also be used, which can detect both cannabis and cocaine. These test a sample of your saliva and give results in a couple of minutes.

What if the police believe you’ve taken drugs and are unfit to drive - either as a result of a roadside drug test or field impairment assessments? They’re likely to arrest you and take you to a police station for blood and urine tests.

If you’re convicted of drug driving in the UK then you could get a driving ban for up to one year, an unlimited fine, up to 6 months in prison and a criminal record.

Your conviction also appears on your licence, which might affect your job if you drive for a living.

You could also face much higher car insurance premiums the next time you come to renew your policy.

Having a driving and/or drug conviction may restrict your overseas travel. Some countries don’t allow access to drivers with this kind of offence on their record.

What's the law on driving and prescription medication?

Drug driving in the UK is illegal if it impairs your ability to drive, whether the drug is legal or illegal.

If you’ve been prescribed any of the drugs in the medicinal section of the table, speak to your doctor. You can usually drive after taking these medicines if you’ve been given advice by a healthcare professional.

Some hay fever medications, such as chlorphenamine, hydroxyzine and promethazine, are known to cause drowsiness as a side effect.

Therefore, you shouldn’t take this sort of medication, or any other that says ‘may cause drowsiness’, if you’re planning on driving.

Solicitor Advocate David Barton says to be mindful that any prescription medication should be taken as instructed, especially if you plan on driving:

"Driving with illegal drugs or when your driving is impaired by drugs of any kind is viewed seriously by police and courts. Drug driving convictions bring an almost automatic disqualification for a minimum of 12 months.

"The same applies if you fail to take medication that you should for example insulin if you're diabetic."

When it comes to medication, always follow the advice of your doctor or healthcare professional, or see the patient information leaflet that comes with the medicine.

If you feel any symptoms occurring, or your driving is impaired in any way - even when taking the correct amount, you shouldn't drive.