How to make a pothole claim

Pothole damage is an issue for lots of motorists. But did you know that in some cases you can claim for pothole damage? We look at how you can make a pothole claim and who’s responsible for the damage. 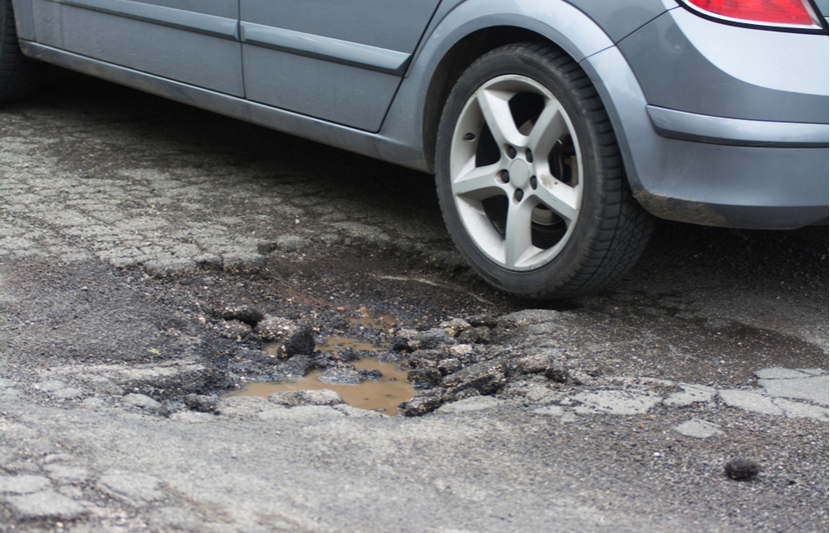 What is a pothole?

A pothole is usually classified as a pit in the road that’s 40mm or around 1 and a half inches deep and 300m wide (just under a foot). Most councils use this sort of classification to determine a pothole.

If the hole has smaller dimensions than this it's probably classified as a ‘carriageway defect’, which is the same thing, just under a different name.

The Asphalt industry Alliance reckons the number of potholes in the UK is around 1.7 million in 2021-2022 the same figure as 2020-2021. This means more drivers are suffering from pothole damage.


Who’s responsible for pothole damage to my car?

Local authorities are usually responsible for pothole damage. They have a responsibility to maintain roads in their jurisdiction.

It’s worth bearing in mind that roads that cross several jurisdictions, such as motorways and A-roads, come under the charge of the following:

If your car is damaged as a result of running over a pothole, your local authority or one of the 4 national authorities could be liable.

If, however, your car is damaged due to other debris on the road, you aren’t entitled to compensation. For this, you’d need to make a claim on your car insurance policy.

How do I make a pothole claim?

In order to make a successful pothole claim, you need to show evidence of pothole damage to your car. Here’s what you need to do:

1. Check the damage caused by the pothole

The damage caused by driving over a pothole often depends on the speed you were travelling.

The faster you were driving, the greater the potential damage. As soon as you're aware that a pothole may have damaged your car, find a safe place to pull over.

See if there’s any visible pothole damage to your wheels and tyres. While you’re driving you also need to pay attention to whether the car is making any vibrations, how the steering feels and whether the car is veering to one side.

If there are any problems get your car to a garage or tyre centre as soon as possible.

You also need to show the local authority pictures of the pothole. If you’re returning after the incident to take photos, bring a measuring tape and use that to show its size.

If that’s not an option, placing an everyday object you have to hand like a shoe or bag can give a good indication of scale.

It’s also important to make a note of the following:

You need to tell the body responsible for maintaining the road about the pothole.

For local roads, B roads and minor A roads that’s likely to be the local authority. To find the right council, use the report a pothole tool on the government website.

For more major roads you have to report it to the relevant national authority:

Even if you don’t make a claim or your car isn’t damaged it still makes sense to report potholes.

4. Get a mechanic to confirm pothole damage and get repair quotes

Ask the mechanic to confirm the cause of the damage in writing. You need this to be able to make your pothole claim from the local authority.

It’s also worth getting quotes from at least three garages. Keep a record of each one  and go with the cheapest.

Showing willingness to keep repair costs down could help your pothole claim.

If you’re intent on making a claim for pothole damage, contact the local authority you reported the pothole to.

Make it clear that you’re looking to make a claim for pothole compensation and pass on:

Also don’t forget to include:

Note that your right to pothole compensation has limits. You need to prove that the local authority failed in its duty to maintain the road, in accordance with Section 58 of the Highways Act 1980.


What happens after I’ve made a pothole claim?

The local authority is under an obligation to respond to any claim lodged with them within 30 days. If they don’t, contact them again via the complaints department.

Chances are they‘ll get back to you with one of the following reactions:

Reaffirm the costs you’ve incurred directly as a result of the incident, and show again that you’ve shopped around for the cheapest repairs.


What if my pothole claim is rejected?

If your pothole claim is rejected, you have a couple of options. Either:

But what if your catalytic convertor was scrapped, or the undercarriage rendered irreparable? The costs involved are likely to be high enough to warrant further consideration.

Taking the authority to small claims court is an option. It’s not cheap, but it’s an option. If you decide to go down this route, it's worth getting indepentant legal advice.

Incidentally, if you’re suspicious, put in a Freedom of Information Act request to establish whether the council actually inspected the site. They’re required to do so, but might not have.

If the court route doesn’t appeal – and it can be pricey if you use a lawyer and lose – you could claim on your car insurance policy.

Note this is likely to be considered an ‘at-fault’ claim, and most likely have a knock-on effect on your no-claims discount and future insurance costs.


When can’t I claim for pothole damage?

Your claim for pothole damage is likely to be rejected if it was actually the result of debris on the road. Or if the pit in the road wasn't large enough to be considered a pothole.

You might, however, still be able to claim on your car insurance. But if the damage is only minor it might be worth paying for the pothole damage yourself.

Your premiums could rise and you could lose any no-claims discount you've built up if you decide to claim for the pothole damage.

How likely is it that my pothole claim will be accepted?

The likelihood of your claim being accepted ultimately depends on the strength of your case and the evidence that you present.

But if you reported the pothole and have evidence that the damage was the result of driving over it, your claim should be accepted.

You might need to be patient though, as some claims could take months to resolve. You might also need to be persistent if you’re only offered a partial settlement or you think your claim has been incorrectly rejected.