Get a car quote
Takes about 5 minutes

Free. Not freeish. Buy car or home insurance and choose a free gift with

Just three of the great reasons to use Confused.com

"Saved £200 on my car insurance by spending 4 minutes on Confused.com. Brilliant."

95
%
of customers would recommend Confused.com after buying car insurance

Why is young driver insurance so expensive?

Young drivers are generally less experienced behind the wheel than older drivers. Unfortunately, that means they’re also more likely to have an accident or need to make an insurance claim. Insurers use their own claims data to back this up and cover the extra risk involved in insuring young drivers by charging higher insurance prices.

A mix of factors go into working out how much car insurance costs. Understanding some of them could help you get cheaper quotes:

These factors apply to drivers of all ages. But this information alone isn’t enough to base a quote on, so insurers also use statistical data from all of their customers to work out the level of risk. Higher risk equals higher prices.

How can I save money on car insurance for young drivers?

Rather than waiting a couple of years to build up your no-claims bonus, there are other ways you can reduce the price you pay for young driver insurance:

1. Think about the car you drive
Powerful cars in high insurance groups are more expensive to insure. They also cost more to repair if you’re in an accident. Choosing a smaller, cheaper car can help save on insurance, especially when you’re a young driver with less driving experience.

2. Add extra security
A car fitted with a security device like an alarm, immobiliser or a tracker means it’s less likely to be broken into or stolen. By making your car secure, insurance companies are more likely to offer you a cheaper quote.

3. Add a named driver
If you’re an inexperienced driver, adding someone with more experience like a parent as a named driver on your policy could bring down the cost. You should only add named drivers who drive the car and the main driver should always be the person who drives the car the most. Getting this wrong could invalidate your insurance. Some insurers allow named drivers to build up a NCB, but most won’t.

4. Increase your voluntary excess
Your prices can change based on how much excess you’re willing to pay. Only enter an amount that you can afford to pay if you have an accident. Over-stretching yourself could mean you can’t make the payment or you end up in debt.

5. Shop around
Rather than going direct to an insurer and getting just one price, by comparing insurance quotes from a range of insurers you’re more likely to find an affordable policy. We compare quotes from up to 112 to save you time and money.

6. Choose a telematics policy
Opting for a telematics or black box policy can make insurance more affordable, especially for young, inexperienced drivers. Having a small box fitted to your car or using an app means the insurer can keep an eye on when, where and how you drive so they can reward good driving with cheaper insurance. Policies will sometimes include restrictions around night-time driving and how many miles you can drive but they can be a good way to get started.

Finding the right car to insure for young drivers

Getting yourself a car that is cheap to insure is a good place to start with bringing down the cost of being a young driver.

As we’ve already said, cars in higher insurance groups tend to be more expensive to repair or replace.

The insurance group a car is in can be affected by:

If you haven’t already bought your car, take a look at our list of the top 10 cheapest cars to insure in 2020.

Get a car quote
Only takes 5 mins

What type of car insurance should I choose?

The type of insurance you choose may depend on if you’re still learning to drive or you’ve passed your test.

What level of cover should I choose?

How much is car insurance for young drivers? 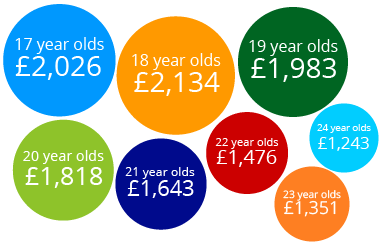 When does car insurance get cheaper for young drivers?
There’s no magic number, turning 25 won’t suddenly change how your insurance is calculated. But, if you drive sensibly and build up your no-claims bonus (NCB) you should see your prices reduce over time.

Can I drive other cars on my policy?
Driving other cars (DOC) can be included on comprehensive policies, but young drivers don’t usually get the DOC benefit. Most insurers have restrictions when it comes to DOC, and being under 25 pretty much rules you out.

Can a dashcam lower car insurance costs?
Some providers offer a discount if you have a dashcam installed in your car. Dashcams provide useful evidence if you’ve had an accident, and some insurers think it makes drivers more careful on the road. When you’re getting a quote, we’ll ask you if have a dashcam fitted to your car. If you do use one, you can use this question to let us know.

Young drivers, we can help!

Insurance with a provisional licence

Explore
Get a car quote
It takes less than 5 mins

After buying car insurance, 95% of Confused.com customers would recommend us (based on 49108 Reviews.co.uk respondents - as of 09/06/20). Read our reviews
Back to top