Skip navigation
Retrieve a Quote My account
You are here:
25 May 2018

With one in five drivers admitting to driving on less-than-ideal wheels, we answer your burning questions about tyres.

When it comes to tyres, bald is not beautiful. Not only that, but it's pretty dangerous. Our latest research has revealed that one in five drivers are driving on tyres whose tread, while road legal, is below the recommended minimum depth.

With that in mind we've looked at some common questions and misconceptions around tyres, so you don't have to. 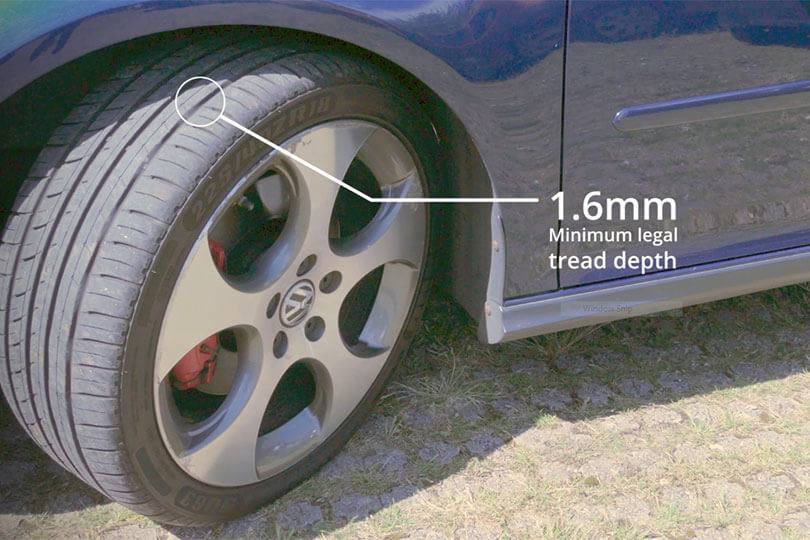 How low can my tyre tread go before I have to change the tyre?

The minimum legal tread depth is 1.6mm across the central three-quarters of the tyre’s width, along the entire circumference.

But it’s generally agreed that you should change your tyres once the tread depth goes below 3mm. After that, the tyre’s efficiency and safety begin to become compromised.

READ MORE: How to check your tyre's tread depth and pressure.

Is driving on bald tyres dangerous?

It can be incredibly dangerous to drive on bald tyres.

Since tyre tread is designed to improve your grip on the road, the lack of tread gives you less grip.

If you're involved in an accident and it's later revealed that you had bald tyres, your insurer could void your claim and invalidate your policy.

This is because the car would be deemed unroadworthy. The same would apply if your car failed its MOT - your car must be roadworthy to be covered.

READ MORE: How to pass your car MOT check

What happens if I’m caught driving on bald tyres?

Not taking care of your tyres could have severe consequences. If you’re caught with tyre tread below the 1.6mm limit, you could get three points on your licence and be hit with a fine of up to £2,500.
That’s per tyre.


Is it really worth buying winter tyres?

The added grip of winter tyres means that your stopping distance is about two-car-lengths better than normal when driving on wet roads.

READ MORE: Do winter tyres save you money?


Are premium tyres worth the money? Are budget tyres safe?

There’s a saying that goes: “Never cheap-out on the things that separate you from the ground – shoes, mattresses, tyres”.

But when it comes to tyres, is it a case of ‘you get what you pay for’?

Since all tyres have to conform to minimum safety standards before they can be sold, there’s little worry about budget tyres being unsafe.

What you’re more likely to get with a premium tyre is that the company has spent more time and money on research and development. So in theory you should get a tyre that’ll last you longer.

Should I rotate my tyres?

There’s some conflicting advice around this. Goodyear recommends rotating your tyres every 6,000 miles because the ones at the front wear out faster than the ones at the back.

On the other hand, Kwik-Fit says that it’s no longer good practice to rotate your tyres. This is largely due to the difference in recommended pressures between front and rear tyres. Having the wrong pressure in your tyres after swapping them could prove problematic.

So what do you do?

"If you drive a rear-wheel-drive car, you should not have to rotate your tyres. However, some models carry service manuals that directly recommend that it should be done eg Nissan Qashqai.
"Generally speaking, front-wheel-drive cars should rotate their tyres as the speed in which the tyres wear down from front to back will be different."

So it very much depends on your specific model. In any case, you should check your owner's manual before you decide either way.

Is it true that over-inflating my tyres will improve fuel economy?

In both cases, you’ll have less tyre surface in contact with the road. This can lead to longer breaking distances and added wear on the tyre itself. So not only will you reduce your fuel efficiency, you’ll wreck your tyres faster.

The best thing you can do to improve your fuel efficiency is to inflate your tyres to the recommended pressure for your car.

READ MORE: Eight ways you're using too much petrol (and what to too about it)

The main and arguably only reason to buy a set of part-worn tyres is to save money.

However, part-worn and refurbished tyres usually aren’t under the same sort of scrutiny that new tyres are subject to.

This means you’ll get a wide range of quality depending on where you get part-worn tyres from. An investigation by the National Tyre Distributor’s Alliance (NTDA) revealed that 34% of part-worn tyres are dangerously damaged or non-compliant with current safety regulations.

Do tyres protect a car from lightning strikes?

It’s a long-standing urban myth that wearing rubber soles protects you from lightning. So the same applies to the rubber tyres in a car, yes?

Not at all, and please don’t attempt to prove otherwise.

Although rubber is an electrical insulator, it provides zero protection from the massive voltage of a lightning strike.

But there is some truth in that being in a car during a lightning storm is safer than being outside.

This is because the metal framework acts as a lightning rod and conducts the electrical charge into the ground. So long as you don’t touch any of the metal within the car, you’ll be safer than if you were stood outside.