Vans have become increasingly sophisticated over the years, with better engines, load capacity and technology than ever before. Whether you’re looking for a large, midsized or small van, there’s plenty to consider in terms of power, payload/load capacity, engine type, styling, tech and of course, price.

Competition is fierce, especially in the midsized market, with leading automakers like Ford, Volkswagen, Peugeot, Vauxhall and Renault going head to head. Here are some of our favourites.

What the best van is for you will depend on your needs. Are you looking for a weekend family runabout? Do you need a business workhorse for tools and materials? Will you need to transport goods across the country?

Remember, the cost of your van insurance might be partly determined by whether your van is purely for social use, acting as transport for your own tools and materials or delivering other people’s goods.

Fortunately, there are plenty of ways to save on your van insurance.

What’s the best van to buy?

The midsized Ford Transit Custom has remained the UK’s bestselling van since it was launched a decade ago. It’s still gets top-notch reviews today and won the Parkers 2021 Van of the Year award.

The Transit Custom generally offers good value for money and holds broad appeal with small-and medium-sized businesses in particular. They tend to favour the Transit Custom for its sizeable payload and driveability.

Next up is the Volkswagen Transporter 6.1, an iconic midsized offering with an especially wide range of variants in the range  – it’s a top choice for businesses and private users alike.

The Transporter 6.1 came top in the Medium van Best Value for Ownership Costs in the What Car? Van Awards 2021.

In the larger van segment, the Ford Transit holds sway, with the latest version giving you more payload, power, comfort and technology.

But watch out Ford – the Mercedes Sprinter is nipping at the Transit’s heels, only narrowly behind the Ford Transit in terms of sales.

Among the other popular choices are the midsized Vauxhall Vivaro and Renault Trafic as well as the larger Peugeot Boxer.

You might also want to consider an all-electric van – it’s a fast-evolving segment of the market, with new offerings emerging all the time. 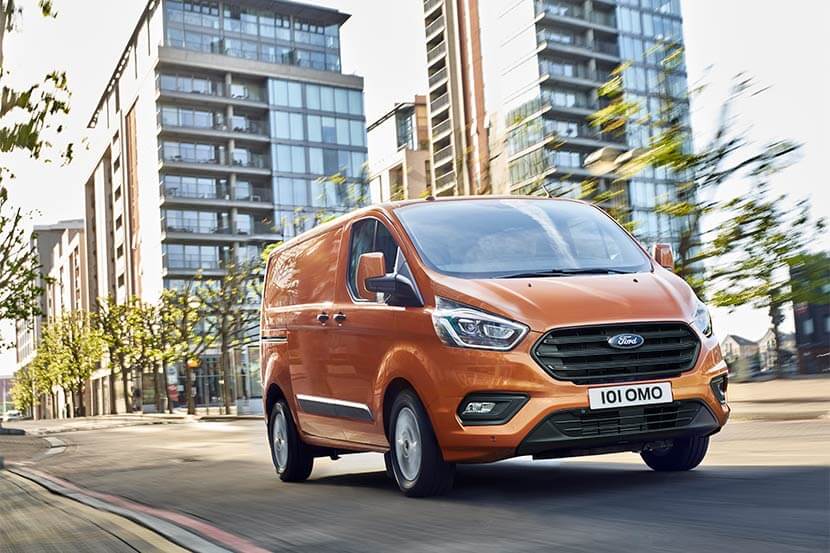 The UK’s bestselling midsized van since it was first introduced in 2012, the Ford Transit Custom is a good allrounder with a reputation for being easy to drive. Ford has regularly updated the Custom Transit over the years to keep it at the top of the pile, adding new looks, more tech and better engines.

The latest Ford Transit Custom comes with a 2.0 litre EcoBlue diesel engine or a plug-in petrol-electric hybrid (Custom PHEV). You can also choose between an L1 wheelbase, giving you a load length of 2,555mm, or an L2 wheelbase with 2,922mm of load length. There’s also choice of roof height, either 1,406mm or 1,778mm.

Ford has brought some decent tech to the Transit Custom, including its Active Park Assist feature, which should identify parking spaces and help you manoeuvre into the tightest of spots. Ford’s Lane-Keeping Alert system should tell you when you inadvertently stray out of your driving lane.

The FordPass Connect modem offers connected world benefits, including 4G WiFi for up to ten devices and real-time traffic updates.

The standard Ford Transit Custom gives you three seats up front, but Ford also offers a five-seater, double-cab version. If you’re looking to carry more passengers, you could consider the eight-seater Tourneo Custom or the nine-seater Transit Custom Kombi. 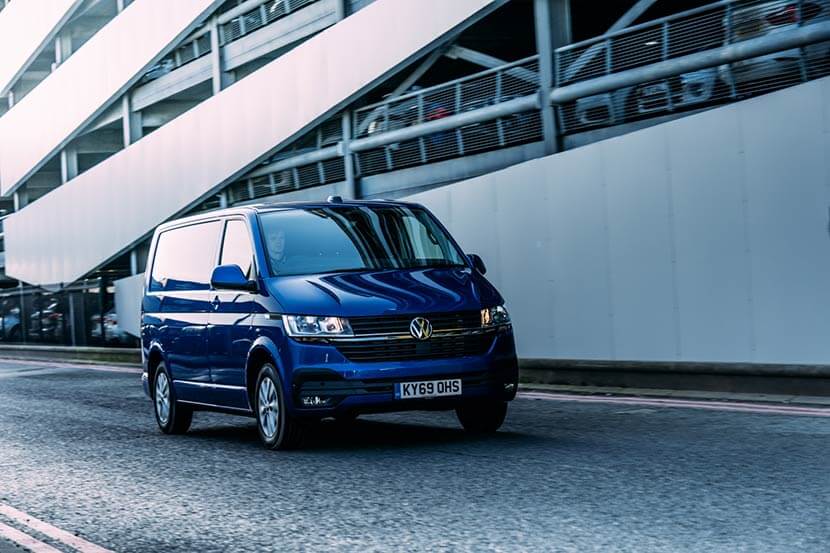 Volkswagen launched the Transporter in 1950, making it one of the first vehicles to be produced under the German marque. Quite simply, the Transporter is the world’s top-selling van of all time – and it’s still up there with the best today.

The Transporter is now in its sixth generation, with a new facelift version (the 6.1) launched in 2019. As with Volkswagens in general, the Transporter has a reputation for holding its value well. The current model tends to score strongly on comfort and for the power of its engines.

As you might expect for a van at this price level, the Transporter 6.1 is packed with tech, including top-notch safety features, parking assistance and oodles of connectivity.

An integrated SIM card (eSIM) now comes as standard with the Transporter 6.1 – following an accident, eCall automatically sends your van’s location to an emergency response centre. If the driver isn’t responding, eCall should also automatically contact emergency services. Your van should additionally be connected to Volkswagen’s full range of We Connect online services.

There’s a wide range of Transporter models to choose from. Volkswagen brought out the all-electric e-Transporter at the end of 2020 but also released the new Transporter Sportline in 2021, with a powerful turbodiesel engine.

Along with the standard panel van versions, the T6 and T6.1 are also available as a minibus (Transporter Shuttle) or as a midsized van with two rows of seats (Transporter Kombi). The standard sixth generation Transporter is available with a 2.0-litre turbodiesel engine or a 2.0 litre turbo petrol engine.

The e-Transporter, with its lithium-ion battery, has a driving range of 82 miles and a top speed of 56 mph.

The Vivaro is a midsized van known for its fuel economy and sizeable payload capacity, with the latest version launched in 2019.

There are plenty of Vivaro models to choose from, though the bestseller is the Griffin panel van, which is also the cheapest in the Vivaro range.

The Vivaro’s FlexCargo feature enables you to create more space. For example, you can fit in two extra people on a bench seat or using the fold-flat centre seat backrest as a table for paperwork.

You also get an alarm system, rear parking sensors, air conditioning, a multimedia audio system and 16” alloy wheels as standard.

Moving up the range, the double-cab Edition model also offers cruise control with:

Also included is the Vauxhall Connect safety and security systems, along with Vauxhall’s electronic stability programme and traction control. You get e-call with automatic emergency response in case of a crash.

At the higher end of the range, the Vauxhall Vivaro Elite offers advanced features such as speed sign recognition with intelligent speed adaptation. You also get lane departure warning and blind-spot detection. 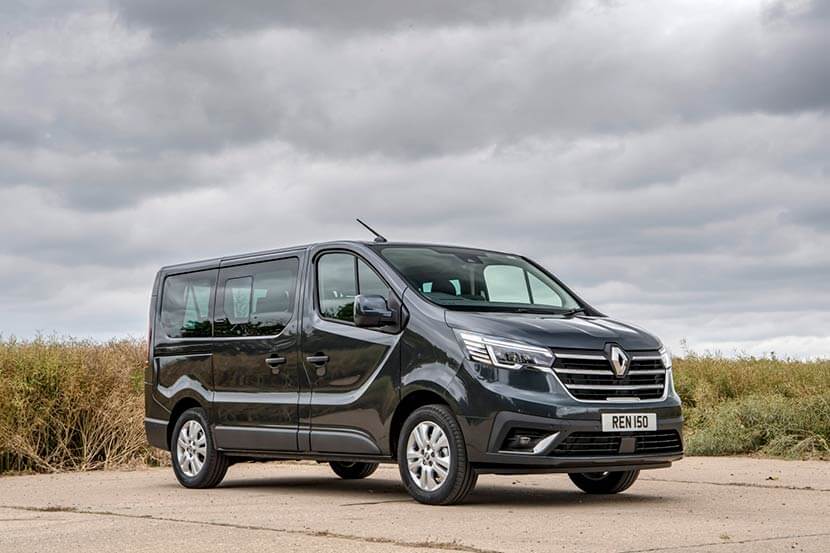 The Renault Trafic has been part of the UK road landscape for over four decades, having been originally introduced by Renault back in 1980. As a midsized van, the Renault Trafic is in a fiercely competitive space. Renault launched the current version in 2014 and then updated the model in 2019 as the Trafic slugs it out with the likes of the Ford Custom Transit.

The Renault Trafic was named Medium Van of the Year 2020 in the annual Fleet World awards, with judges impressed by the latest model’s more powerful, low emission engines. Renault Trafics now offer 2.0-litre turbodiesel engines that comply with Euro 6 emissions standards, with up to 170hp.

There are two lengths and two roof heights to choose from, so that’s a total of four body variations.

The Trafic is stylish inside and out. From the smooth lines to all the little touches, including an armrest on the driver’s seat, heated door mirrors with electric adjustment, and a DAB radio with Bluetooth.

Depending on the model, you can unlock and start via a hands-free card, enjoy air conditioning and benefit from practical touches like a laptop docking station.

Select a model with the Business+ trim upwards and you get what Renault terms as a mobile office – a passenger seat with a centre section that folds to form a desk.

The Sport versions of the Renault Trafic come with cruise control & speed limiter.

All Trafics give you a 5-year, 100,000 mile warranty, with servicing and roadside assistance.

The largest in Ford’s van range, the Ford Transit continues to be one of the bestselling vans in the UK.

The current incarnation of the Ford Transit was launched in 2014 but has been extensively revised since then.

Two years later, Ford updated the Transit to increase the payload and overhaul the cab as well as adding new technology and updating the exterior design.

Along with the standard panel van, you can also choose a double-cab setup, with a second row of seats, or the popular Ford Transit minibus 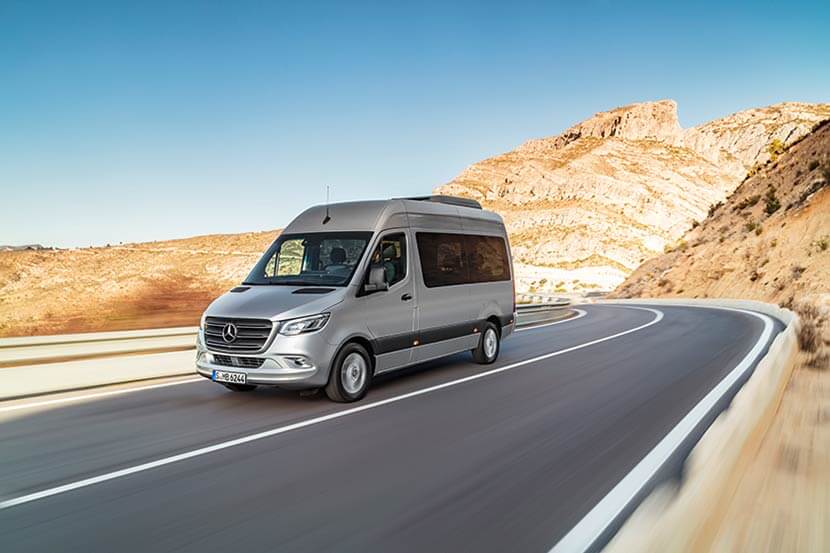 Versatility is high on the list of priorities for the German manufacturer, which is why the Sprinter is available in many different formats.

There’s a choice of roof heights, load areas and vehicle dimensions to enable buyers to pick the perfect combination for their needs.

Comfort and practicality are a given, with fully-adjustable electronic driver and passenger front seats as well as a multifunction steering wheel packed full of controls.

A DAB radio is fitted as standard, along with an Mercedes-Benz User Experience (MBUX) infotainment system that can learn driver preferences through artificial intelligence.

Active Brake Assist, Crosswind Assist, Attention Assist and an Emergency Call System are on a long list of safety and security features.

Meanwhile, reversing cameras, an electric parking brake, internally-fitted roof racks and a multifunction box are among the available options.

All this – along with the choice of six body styles, four power options, four body lengths and three cargo heights – make this an attractive allrounder for hauliers.

The Mercedes Sprinter nevertheless has a wider appeal and is proving popular with those looking for good van model to do a camper conversion.

There is also an all-electric variant of the Mercedes Sprinter – the eSpinter offers a driving range of up to 96 miles.

The Peugeot Boxer was introduced more than a decade ago and remains one of most practical big vans on the market, with an impressively large load area.

It’s easy to drive, responsive and has plenty of room for three passengers in the cab.

Depending on the model you choose, you can enjoy cruise control, air conditioning, rear parking sensors and 5-inch colour touchscreen with DAB radio and integrated satellite navigation.

In addition to ‘S’ and ‘Professional’ levels, the Boxer is now being made in more bespoke GRIP and ASPHALT versions to better suit the needs of particular businesses.

GRIP is ideal for rough terrain and long, dirty roads, which makes it the preferred choice for those wanting the toughest Boxer.

The Asphalt model, meanwhile, is the more comfort-focused option for drivers who spend a lot of time behind the wheel.

The latest addition to the Boxer range is the new all-electric Boxer. It boasts a driving range of 139 miles so could fast emerge as a force to be reckoned with in the electric van market.