Whether you’re a biker or are involved in an accident with one, it's important you handle the situation correctly. Here's what you need to know. 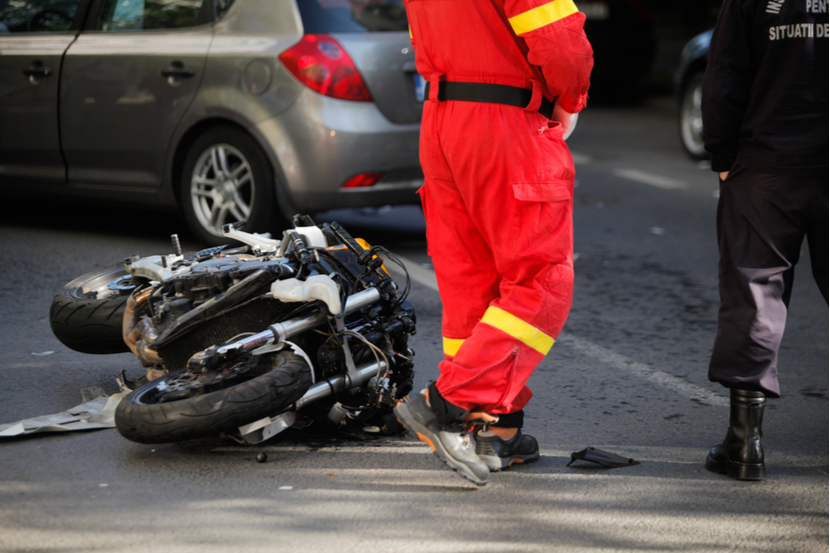 If you’re involved in a motorbike accident it’s important you stay where you are. Leaving the scene before providing certain details could be a criminal offence, just as it is with car accidents.

Failing to stop – which is often called ‘hit-and-run’ – could have serious consequences.

If you do commit a hit-and-run offence, you face a large fine, getting up to 10 penalty points on your licence. You could even get up to six months behind bars.

When personal injury or death is involved, things are even more serious. But fleeing the scene of even a minor collision where there’s just superficial damage is also an offence.

Emotions tend to run high after an accident, but it’s important to stay as calm as possible.

Getting angry or starting an argument won’t help, and it can potentially alienate witnesses.

Staying in control might also have a calming effect on those around you.

After an accident, the most important thing to do is make sure no one – including you – is seriously hurt, and to remove any new or additional dangers.

As with all first aid, it’s crucial to assess the situation before doing anything else. If you're going to put yourself at risk by tending to the injured, don’t.

Next you should check anyone injured for responsiveness, simply by talking to them. If they respond normally, talk to them calmly until the emergency services arrive.

Should I remove a motorbike helmet after a crash?

If another motorcyclist is injured at the scene, don't take off their helmet. You don’t know if they’ve sustained head injuries, so any movement could be dangerous.

The only exception is if they’ve stopped breathing. This trumps any concerns about head or spinal injuries. Remove the helmet carefully and perform CPR.

If the injured person is unconscious, you should ensure that their airway is clear and that they’re breathing. Also, check their circulation.

St John Ambulance has some useful tips for what you can do in an emergency.

After a crash, once everybody is safe, you should:

Should I phone the police if I’m in a motorcycle crash?

If the situation has created a hazard for other people or traffic, or if someone’s injured, you should call 999 straight away and ask for the police.

What details do I need to share if I'm in a motorbike accident?

If someone other than you is hurt or there’s damage to another vehicle or third-party property (including streetlights or signs etc), you must stop and share your:

If you don't give your name and address, you must report the accident to the police as soon as you can, and certainly within 24 hours.

If someone else who's involved in the accident has left the scene without exchanging details, or if they refuse to give you their details, you should call the police.

If you injure or kill a dog, horse or farm animal, you must report it to the police.

If it’s a minor incident – with no injuries and no damage caused to any third-party property or vehicle, for instance – you don’t need to involve the police.

Get details from any witnesses

Try to get any witnesses to give you their details as they may prove useful when you need claim or report to the police.

Make further notes about the accident

Any further notes you can make about how the accident happened could help you later on, when you need to make a motorbike insurance claim.

If you have a camera, take plenty of pictures of the scene. Try to get a street name, a junction sign or a distinctive landmark into one of the shots, so that the location is easily identifiable.

If the state of the road was a factor in the accident, take pictures of it to use as evidence.

Under the terms of most motorbike insurance policies, you should report an accident as soon as it’s safe to do so to your insurer. They should then create a record and tell you what happens next.

Should I tell my insurance company about a minor motorcycle accident?

Even if there’s no one else involved and there's only minor damage that you don’t intend to claim for, your insurance company expects to be informed.

Your riding history forms part of your personal profile which insurers rely on when they calculate your insurance costs.

It doesn’t mean you’ll necessarily lose out. But it does mean that if you ever put a claim in for something else and your insurer discovers undeclared damage from previous incidents, you might find yourself in hot water.

How do I keep my motorbike insurance costs down after a motorbike accident?

After an accident, insurers may consider you a greater risk, and so hike up your motorbike insurance premiums.

If you find insurance costs too much after an accident, you could try adjusting your voluntary excess or level of cover, which could bring prices down. Or read our guide for tips on how to get cheaper motorbike insurance.

Prevention is better than cure

The Royal Society for the Prevention of Accidents has a useful guide full of tips on how you can avoid the five most common motorcycle accidents.

You might may also want to ensure you have all the necessary gear to keep you safe while out on your bike.