Countries that drive on the left

It’s crucial to understand the driving rules in your chosen destination, whether you plan to hire a car or venture across borders in your own vehicle.

Here we highlight which countries drive on the left, look into why the UK has traditionally driven on the left, and the car insurance rules you should obey. 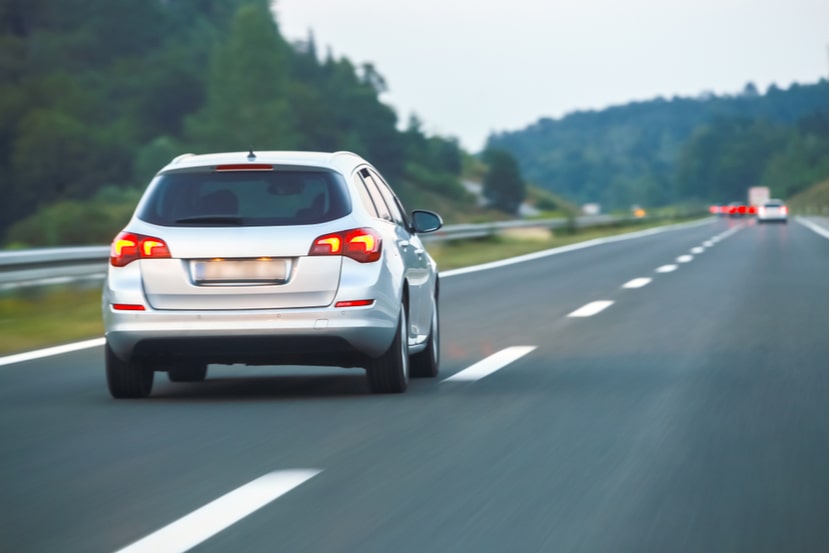 How many countries drive on the left?

The good news for UK drivers is they’re not completely alone in driving on the left. There are still countries around the world that take the same approach.

In fact, there are more than 70 countries that drive on the left. Many of these are actually former British Colonies, including:

Also, this list only includes a handful of European destinations. Go to Malta or Ireland and you should be fine, but head elsewhere on the continent and you need to be on the right.

So, let’s take a closer look at which nations share our left-hand sided preference.

What countries drive on the left?

We’ve used a number of sources to help compile our list of more than 70 countries and territories in which you drive on the left.

There's an interesting spread of location that are dotted around the world, including parts of Asia, Oceania, Africa and the Americas.

If you’re planning to visit any of them, it’s still advisable to check the current rules of the road, along with other regulations that may apply.

Here are the main areas where cars drive on the left: 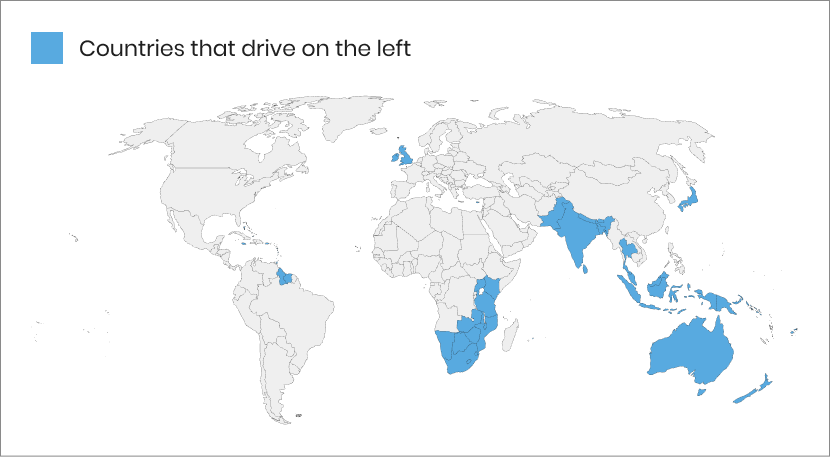 Have any countries switched from left to right?

Do countries change the side or the road on which they drive? Well, although this is certainly uncommon, there has been a relatively recent example.

Back in 2009, Samoa became the first country in decades to officially switch from driving on the right-hand side of the road to the left.

The move was made to bring the country in line with Australia and New Zealand.

Why does the side of the road matter?

In theory, it shouldn’t matter greatly. Rules and customs are always different when you go abroad and it’s just a case of adapting to what’s required. There’s no right or wrong!

But it’s helpful to know before you visit a country so you can be prepared. Suddenly driving on the other side of the road for the first time can be a challenge.

You have to think carefully when it comes to overtaking and choosing what lane to be in for roundabouts, as well as which direction traffic may be coming.

The cars are also likely to be built differently, depending on the country’s road rules. For example, in the UK, most drivers sit on the right side of the car.

Why does the UK drive on the left?

There are plenty of theories as to the origins of the UK driving on the left. Some are realistic, others more fanciful. No-one is 100% sure.

A more persuasive suggestion is that it dates back to a scarier time when swords were used to settle disputes.

The story goes that we chose to walk on the left-hand side as most people were right-handed. This would find it easier to draw their weapon should it be needed.

Others suggest its origins lie in the aristocracy favouring to pass each other on the left as they found it more polite. Commoners, it was said, would pass on the right.

Either way, the rule demanding people stick to the left didn’t become law in Britain until the increase in traffic made it essential.

The legislation was encapsulated in the Highway Act 1835, which also specified a number of offences for which a carriage driver may be punished by a fine.

Why do some countries drive on the left?

Let’s say you took a map of the world showing countries that drive on the left. And on top of it you laid over a map of countries that were formerly part of the British Empire. You’re likely to see many of the same spots.

This is the case for many areas in Oceania, India, and east and southern Africa. The few small pockets of South America once part of the British Empire also drive on the left.

The big exceptions to this are the USA and Canada. After the USA gained independence from the British, it switched from left to right.

Can I take my car to another country that drives on the left?

Yes, you can, but the challenge is getting the car to its location. It’s not exactly practical to have your Ford Fiesta shipped over for your trip to the Bahamas.

In those cases, it might make more sense to hire a car when you’re in the country. If it’s a country that drives on the left then this should feel more like being at home.

The advice is to pay attention to pedestrians crossing the road at green lights, cyclists on payments, and taxi drivers stopping suddenly.

Am I insured to drive on the left in other countries?

For example, all UK vehicle insurance provides the minimum third-party cover to drive in the EU, as well as the likes of Andorra, Iceland and Norway.

But there may be limitations on the policy when it comes to protection for theft or damage that takes place abroad.

While you don’t need to carry a green card in the EU, it may be required in other destinations, such as Albania, Belarus, Russia, and Turkey. Always check the current rules before travelling.

The best tip is to check the government’s foreign travel advice so you know exactly what to expect in particular countries – especially if your trip involves crossing several borders.

Other rules for driving abroad

You need to take your driving licence with you in order to drive abroad. Therefore, make sure you check – well before the planned trip – that yours is valid.

If it’s about to expire you need to renew it. Obviously don’t leave this to the last minute. You need to apply at least a week before you travel.

If you’re taking your own vehicle, you also need to take your log book, also known as your V5C, along with your insurance certificate.

If you’re taking a car that you’ve either hired or leased in the UK, you need a VE103 certificate, which shows you are allowed to drive it abroad.

These can be sourced for a fee from organisations such as the British Vehicle Rental and Leasing Association (BVRLA).

Can I drive a left-hand drive car in the UK?

Yes, it’s perfectly legal to be behind the wheel of a left-hand drive car in the UK. There’s long been an enthusiastic following over here for American cars.

But, there are strict rules and regulations governing the importing of cars to the UK. You need to follow these closely so make sure you do your homework.

For example, you have to tell HM Revenue and Customs within 2 weeks of the car arriving, as well as paying any VAT and duty that applies.

You also need to get approval for the car as well as registering and taxing it with the DVLA.

Of course, the car also needs imported car insurance. You might find that the cost is higher for an imported car. This depends on factors such as the likely cost of repairs. As always, do your research and shop around for the best available deals.