Planning on making the long trek down to the Cote D’Azur, or do you fancy tackling the traffic in Paris?

Either way, it pays to know how French driving laws work before you're slapped with a fine or worse. What do I need to drive in France?

Driving in France needs some preparation, so before you load up your car, be aware that there are some legal requirements that differ from the UK.

You must have at least third-party car insurance cover to drive in France.

But this minimum level of protection doesn’t cover any damage to your car or any injuries you suffer.

Some insurance companies offer EU travel as part of their cover, but the type of insurance might vary.

Confirm the type of insurance cover you want in France before setting off.

You don’t need to have a green card to travel in any EU country, including France.

But you should still tell your car insurance provider that you’ll be driving in France. If you’re driving through France to another country, you might need to tell your insurer that, too.

If you have a valid photocard driving licence, you won’t need an International Driving Permit (IDP) to drive in France.

Do I need a GB or a UK sticker to drive in France?

Unless your car has EU number plates, you should display a UK sticker.

You should display it clearly on the rear of your car. If your car already has a GB sticker on it, you should replace it with a UK sticker before travelling.

You need a Crit’Air sticker to drive into environmental zones in France.

The air pollution sticker, available in 6 colours, distinguishes older vehicles from newer ones. This helps to identify vehicle emissions.

In some areas, vehicles can be refused entry based on the Crit’Air sticker displayed on their windscreen.

There are two zones to note:

ZCRs restrict access to certain vehicles based on their Crit’Air sticker on a permanent basis, usually between certain hours and/or on certain days.

ZPAs are temporary restrictions placed on certain vehicles and can be imposed when air pollution reaches a peak. Always check before driving into a ZPA, as the status of these zones could change within 24 hours.

Ignoring these restrictions could land you a fine or even see your vehicle detained.

Apply for a Crit’Air sticker before starting your journey on the French government website.

Alongside your documents and Crit’Air sticker you’re required by French law to carry the following items:

These items will help if you find yourself unfortunate to breakdown.

Indeed, some of these items should be in your car breakdown kit when driving in the UK, too.

Do you need to carry breathalysers in France?

Drivers no longer have to carry breathalysers with them when driving in France following a vote by the French Parliament.

But motorists looking to stay on the right side of the law may want to continue carrying a breathalyser.

Lower speed limits apply in France during difficult weather conditions, so remember not to get caught out. If visibility is less than 50 metres, a 50km/h limit applies on all roads.

Certain types of vehicles, including coaches and cars with trailers, also have to adhere to different speed restrictions.

Remember, French speed limits are shown in km/h, which is different to mph in the UK, so don’t get caught out.

And don’t think about bringing a speed camera detector when driving in France.

You could face a fine up to ‎€1500 for having a radar detector in your car, even if it’s part of your satnav and switched off.

If in doubt, get in touch with your satnav manufacturer and ask about using the device on French roads.

The French alcohol limit is 0.5mg/ml of blood.

If you have fewer than 3 years’ experience behind the wheel, this is reduced to 0.2mg/ml of blood.

This is considerably lower than the UK’s drink-drive limit, so it’s best to not touch any alcohol if you’re planning on driving.

Just as in the UK where we use yellow lines on our roads to indicate whether you can or not park there, so do the French.

If you see an unbroken yellow line, you can’t stop or park at the side of the road.

A broken yellow line means you can stop there, but not park. Fail to follow these rules and you risk being towed away.

Some French drivers may use the archaic system of ‘priorité à droite’ – right of way.

This rule sees all drivers giving way to traffic approaching from the right.

These days, most roads have signs that indicate which drivers have priority.

But if you find yourself in a country road or in smaller villages, ‘priorité à droite’ might still apply.

So, if you hear the angry toot of a French horn, chances are it’s because you didn’t follow this rule.

No hands-free or Bluetooth devices

Use of all mobile phone hands-free and Bluetooth devices when driving is banned in France.

If you’re caught chatting away, you could land yourself with a €135 fine.

It’s also worth noting that traffic lights in France go from red straight to green, without the amber phase in-between.

When driving in France, you might have to contend with a number of road signs you won’t have seen before.

Here are some common road signs: 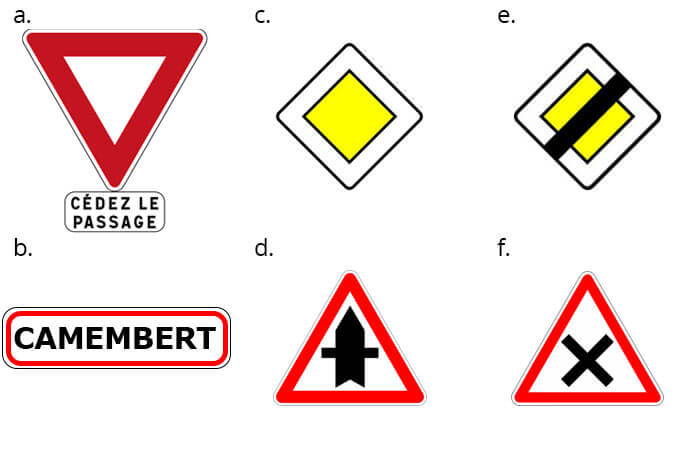 A: Give way – If you spot this upside-down triangle with a white centre, it means you’re approaching a junction and you need to give way.

B: 50 km/h speed limit applies while in this town.

C-D: You have priority on this road – The diamond shaped sign with a white edge and yellow centre means you’re entering a priority road, giving you right of way. The triangle with the red edge warns you that there’s a junction ahead, but that you do have priority.

French motorways (autoroutes) are operated by a number of private companies, which means if you’re driving on one, you might have to pay for the pleasure.

All French motorways start with an A, so if you find yourself on one of these, be prepared to spend a few euros.

How much you pay depends on what kind of vehicle you’re driving and how far you’re going.

Different tolls roads are owned by different companies, so rates are likely to change depending on where you are.

You can see what you may pay for a planned journey via autoroutes.fr.

On most toll roads, you take a ticket when you enter and then pay when you exit.

You can pay these tolls by cash or card. And there’s also an automatic payment system called Emovis that allows you to drive through tolls without stopping.

This could be particularly handy for British drivers as the toll booths are to the left of the car, not the right. This means you’d have to stretch over the passenger’s seat to pay the toll.

That is, of course, assuming you’ve not hired a car for your holiday.

If you choose to drive on toll roads, there are five main signs on the toll booth lanes:

Is it dangerous to drive in France?

So it might be worth exercising a greater degree of caution when driving on the continent.