Skip navigation
Retrieve a Quote My account
You are here:
16 Nov 2020 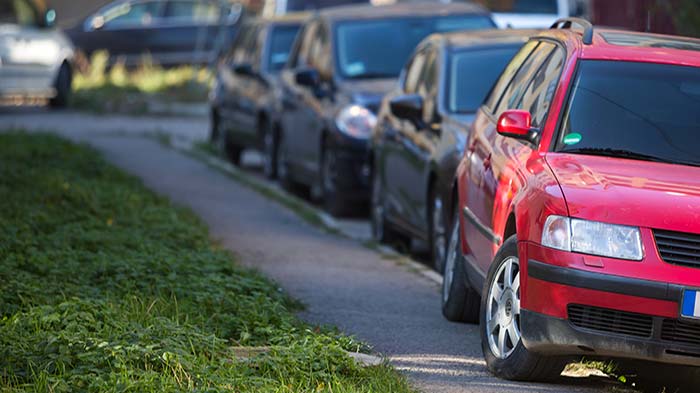 Are you a pavement parker? If you are, you could face a fine.

What's the pavement parking problem like in your area? Let us know in the comments.

Pavement parking is an issue that peeves pedestrians. We asked people across the UK and over half* (55%) have been affected by someone parking on the pavement.

In some areas with narrow streets, motorists don’t have a choice but to park on pavements, as their cars could hold up traffic or block emergency vehicles.

A quarter (25%) of people are confused by pavement parking. And it could become more confusing yet, as some UK governments are considering banning it entirely.

So what could change if they start to crack down?

In most places, pavement parking bans are enforced by the local council. But they can only charge you if you’re parked on yellow lines or if signs say it’s not permitted.

If you’ve been caught parking on the pavement by the police, you could be charged with “unnecessary obstruction of any part of the highway”.

But, according to the Living Streets foundation, they rarely take action. That’s because the existing laws are unclear, and it can be difficult to prosecute.

What are the countries in the UK doing to stop pavement parking?

But each country is at a different stage with the ban:

Scotland were the pioneers of launching a nationwide ban on pavement parking.

Once the details are ironed out, parking on any pavement in Scotland will be illegal. Any motorists caught will receive a Parking Charge Notice (PCN).

The Scottish government announced the ban in 2019, but as it’s nationwide, it’s thought it’ll take 5 years to implement.

Wales recently announced that they would give councils the authority to crack down on pavement parkers.

The Welsh government doesn’t want to penalise people if they have no other choice but to park on the pavement.

By giving the responsibility to local councils, they can target hot spots and use their discretion to penalise pavement parking.

They’re aiming to roll out this regulation by July 2022.

Currently in England it’s only illegal to park on the pavement in London.

This could change though. In October, the government discussed a couple of ways to solve the pavement parking issue.

When the councils can’t do this, the police can step in.

They’ve also suggested improving the system that councils use to make parking restrictions, as it’s time consuming and labour intensive.

There’s no blanket ban on parking in Northern Ireland.

In built-up areas – known as urban clearways – pavement parking is banned. It’s also banned on yellow lines and wherever signage prevents it.

Why can’t I park on the pavement?

As a result, pedestrians may have no choice but to walk round your car via the road – putting themselves at risk.

More than seven in 10 (72%) people told us they’d had to do this due to pavement parkers. More than two in five (44%) told us they felt in danger because of this.

The thought can cause anxiety for any pedestrians, and some said they might avoid travelling altogether.

“We’re regularly contacted at Living Streets by disabled and older people who feel trapped in their homes because there isn’t enough room on the pavement for wheelchairs or mobility scooters.

This has impacted more people during the pandemic, with blocked pavements affecting everyone’s ability to physically distance.”

Also, pavements aren’t designed to be parked on, and over time the surface can become uneven or cracked, causing trips hazards.

What if I don’t have a choice but have to park on the pavement?

In its recent announcement, the Welsh Government mentioned that in some areas avoiding the pavement was difficult.

Almost one in two (47%) people told us they had to park on the pavement because they didn’t want to obstruct the road.

Just over half (53%) said they parked on the pavement because the road was too narrow.

You’ll receive a PCN (penalty charge notice) if you’re caught parking on a pavement where it’s not permitted.

You may receive a charge that you have to pay within 28 days, this is usually reduced if you pay within 14 days. This will depend on your local council’s rules though.

If you’re caught by the police, you’ll be charged with “offence of obstruction” and be given an FPN (fixed penalty notice).

You could be charged up to £200 and be given penalty points on your licence.

*Figures taken from omnibus research carried out by OnePoll on behalf of Confused.com. This was a nationally-representative poll of 2,000 UK adults. The research was conducted between 11 November and 13 November 2020.