Low emission zones are areas in a city that charge high-polluting vehicles to enter.

So what are the plans for low emission zones? And how might they affect you? Here's what you need to know. 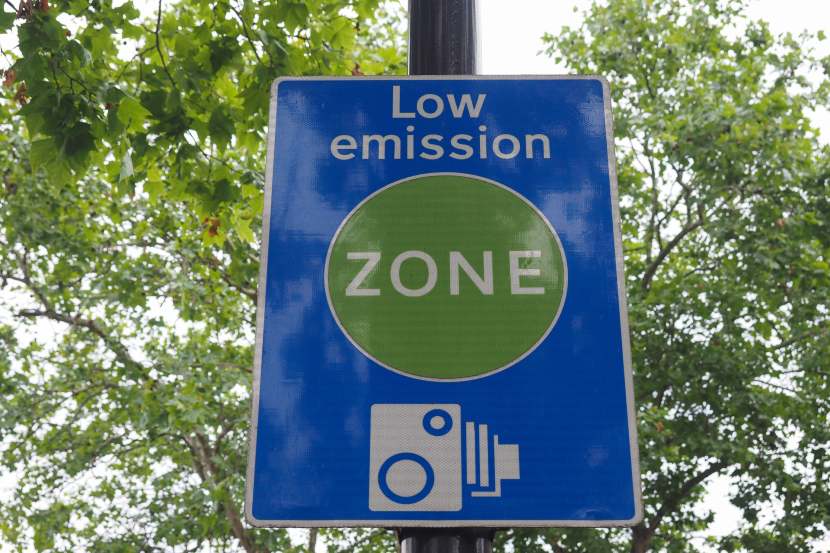 What is a low emission zone or clean air zone?

They're often found in areas with high levels of air pollution – usually towns or city centres.

What vehicles will be affected by clean air zones?

In most cases, you pay to go through these zones if your vehicle has high emissions. If you don’t pay the fee, you may be hit by a penalty charge notice (PCN).

In some cases, fees don't apply to petrol cars built after January 2006.

Electric vehicles – as well as certain hybrids and other vehicles with zero emissions – won't have to pay to enter these areas. This is one of the many benefits of owning an electric vehicle.

Why are low emission zones being introduced?

It’s all part of a wider strategy by the government to improve air quality across the UK. It ties in with the plans to ban the sale of new petrol and diesel vehicles by 2030.

“If you don’t have an eco-friendly vehicle, the chances are that you could attract an unwanted fine. Some cities are charging HGV drivers up to £100 per day because of the environmental harm they risk, so it really pays to do your research before travelling to a new town or city.

"It’s likely that we’ll see more towns and cities adopting such zones over the next 12 months or so, as the UK Government continues work in reducing air pollution levels. But that’s not all.

"These introductions are part of many new driving laws that have come into play since the start of the year. So it’s important for drivers to familiarise themselves with them, ensuring that we all keep each other safe when on the road.”

A number of places are planning on introducing and expanding low emission zones or clean air zones, including:

The ultra low emission zone (ULEZ) is in London, covering all vehicles that don’t meet emissions standards. For more information check out our guide on the ULEZ.

If your vehicle doesn’t meet the emissions standards, you’re charged a daily fee, which can be up to £100 for some larger vehicles.

You can check if your vehicle meets emission standards on the Transport for London website.

You can enter the zone with no charge if your vehicle is:

Cars that don't meet emission standards will pay £8 per day.

You can see the area the CAZ covers on Birmingham City Council’s website.

Residents with a car registered within the CAZ are exempt from the charge for 2 years. For a full list of exemptions, visit #brumbreathes.

The council has support available to help people adjust to the CAZ, including a £1,000 mobility credit and a £2,000 scrappage scheme.

A pilot for Oxford’s zero emission zone started on 28 February 2022 and runs between 7am and 7pm all-year round.

The zone cover 9 streets in the centre of Oxford to begin with, Only 100% zero emission vehicles can be used in the zone free of charge.

Other vehicles are allowed in the zone. These vehicles could get a charge between £2 and £10 per day. These charges are set to increase, ranging between £4 and £20 from August 2025.

Bristol GOV says that as a guide, the charges will not apply to:

You can find a map of the CAZ on Bristol.GOV.

Low emission zones were introduced in Aberdeen, Dundee, Edinburgh and Glasgow in May 2022. These zones are in force 24 hours a day, all-year-round. Rather than charging non-compliant vehicles to use the zone, the Scottish government will introduce £60 PCN penalties for vehicles that don't meet emissions standards.

Although these clean air zones have had the greenlight, they're not currently enforced - there's a grace period to allow drivers to make adjustments The plans for enforcing these low emissions zones are:

You can find full details of all of the LEZs on the Low Emission Zones Scotland website website and Transport for Scotland.

Bradford’s Clean Air Zone goes live in September 2022, according to the council’s website.

The zone covers the Bradford outer ring road and the area inside it. It also extends along the Aire valley corridor to include Shipley and Saltaire.

Some vehicles that could be charged if they don’t meet the emissions standards include:

The charges range from £7 for a private hire vehicle to £50 for a HGV or coach.

Regular passenger vehicles shouldn’t be charged for entering the zone.

Bradford are offering grants of up to £3,200 for vehicles that don’t meet emissions standards. To find out if your vehicle is compliant, visit the Bradford GOV website.

Private vehicles won’t be charged and neither will newer less-polluting commercial vehicles.

Euro 6 standard diesels and Euro 4 standard petrols will be charged for entering the zone.

Taxis or private hire vehicles that don’t meet emissions standards will be charged £10 per day.

HGVs, Buses and coaches that don’t meet emissions standards will be charged £50 per day.

Fire engines and ambulances won’t be charged for entering the clean air zones.

You can check if the charge applies to your vehicle on GOV.UK.

This year, Greater Manchester Clean Air Zone released a joint statement with the government announcing a pause on the Clean Air Zone.

The Clean Air Zone committee has released its plans for the zone’s rollout. According to the statement, they’ll deliver the CAZ no later than 2026.

At the moment, the proposed CAZ in Greater Manchester covers:

Private cars, mopeds and motorbikes shouldn’t be charged for venturing into the CAZ. But non-compliant commercial vehicles could be charged.

Where are Europe’s low emission zones?

There are now more than 200 cities across Europe that have low emission zones, where high-polluting vehicles are either banned or have to pay a charge to enter.

There’s no one-size-fits-all, as some of the LEZs apply to all vehicles while others apply only to larger vehicles.

So if you’re planning to drive abroad, it’s worth checking out the websites of the cities you’re visiting. That way you find out in advance what it’ll cost you – and if you’ll even be allowed in!