Skip navigation
Retrieve a Quote My account
You are here:
09 Nov 2020

Everything you need to know about driving in bus lanes 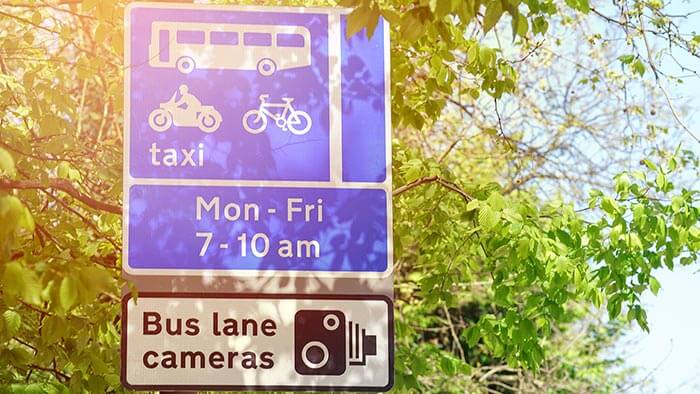 Many drivers find bus lanes confusing - our simple steps can help you avoid a fine.

Bus lanes are a source of confusion for motorists as there are many different rules.

Our research shows that more than two in five (44%) drivers have accidentally driven in a bus lane.*

What the law says about us lanes:

”Bus lanes are shown by road markings and signs that indicate which (if any) other vehicles are permitted to use the bus lane.

"Unless otherwise indicated, you should not drive in a bus lane during its period of operation. You may enter a bus lane to stop, to load or unload where this is not prohibited."

Yes, if the bus lane specifies times when vehicles can use it. But if the bus lane doesn't allow other vehicles, there are only specific circumstances where you can drive in it:

If you do enter a bus lane, make sure you leave it again as soon as it's safe to do so.

How can I fight a fine for driving in a bus lane?

Of those that drove in a bus lane, more than one in four (28%) people said they were hit with a penalty charge notice (PCN).

You get a PCN from your local authority if you commit a traffic offence such as a parking violation. These are civil matters rather than criminal offences, so it's unlikely to involve points on your licence.

If you don’t pay the fine within 14 days the rate usually doubles. But whatever the amount, you must pay it within 28 days.

You can contest a PCN. Visit your council’s website, or follow the instructions on the PCN itself. If you decide to dispute it the cost of the fine will freeze until the case is resolved.

If you wait until after 28 days to appeal your PCN it won’t be considered, and the full amount will be charged.

This can vary and often depends on the area so make sure you check before using the bus lane. Usually, these vehicles are allowed to use bus lanes in certain circumstances:

How to spot and avoid a bus lane

Bus lanes have a solid or dashed white line, with a sign that shows the specific the type of bus lane.

Some bus lanes have operating times, which you'll find on the signage near the lane.

Many bus lanes are in operation 24 hours a day, which means unauthorized vehicles can't normally drive in them.

If you’ve noticed a sign, and you're clear on the rules then you can use the bus lane. If you’ve missed it or if you're are unsure, remember these key points:

This is a length of street that creates a shortcut for buses. It reduces travelling time for passengers as it cuts out through traffic.

As with a bus lane, you shouldn’t use it unless you’re allowed to do so.

* Figures taken from omnibus research carried out by OnePoll on behalf of Confused.com. This was an nationally-representative poll of 2,000 UK drivers. The research was conducted between 12 and 14 October 2020.