Motorway driving: how to stay safe

The motorway is still the road-of-choice for commuters and holidaymakers alike. And with 17% of all British traffic riding these roads, tensions can be high.

When it’s not people hogging the middle lane, you’ve got impatient drivers tailgating you for miles. It’s frustrating. And what’s more, many drivers aren’t even aware they’re doing it.

With that in mind, here’s a quick refresher on how to use the motorway without annoying your fellow drivers. Not only that, but you’ll stay on the right side of the law, too. 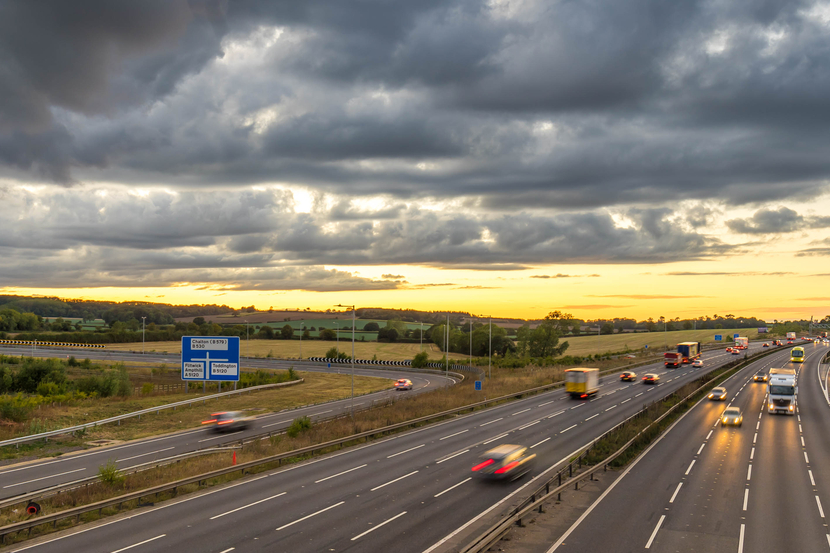 How you should join and leave the motorway

When joining a motorway, you should always give priority to vehicles already on the motorway.

Some slip roads eventually become the left-hand lane of the motorway. If this is the case, stay in your lane until you fully join.

You should be made aware of your exit junction well before you need to leave the motorway. This should give you plenty of time to move into the left-hand lane before reaching the exit.

When you’re leaving at your junction, keep your speed in check. After cruising at 70 mph for miles, your speed might be higher than you think – even if you slow down.

Let’s clear up a couple of myths first.

This is how they work:

Certain kinds of vehicle can never use the right-hand lane on a motorway with three or more lanes:

You can find the full list in the Highway Code.

How you should use the lanes on a motorway

You should drive in the left-hand lane unless slower traffic ahead means you need to overtake. Similarly, if you then need to overtake traffic in the middle lane, use the outside.

You can also move across to the right if you’re approaching a junction and traffic is about to merge from a slip road on the left.

Overtaking on the motorway

Overtake only when it’s safe and legal to do so. Never overtake on the left (also known as undertaking).

Once you’ve overtaken, you should move back into the left lane. Hogging the middle lane is not only bad form, it’s an offence that could leave you with points on your licence.

There’s one circumstance where you can technically overtake on the left. This is where all lanes of traffic are moving slowly, but the left lane is moving slightly faster.

This tends to be fine. But don’t start weaving in and out of your lane to get ahead.

How can I stay safe when driving on the motorway at night?

Driving on long, straight, largely boring roads at night comes with the added risk of tiredness and reduced visibility.

Some motorways aren’t lit at night, making it more difficult to see other drivers.

To stay safe, you must switch your headlights on half an hour after sunset and keep them on at least until half an hour before sunrise.

You should also switch your lights on when visibility is reduced below 100 metres due to rain, snow or fog.

Tiredness on the motorway can be a real danger, too. The Highway Code says that you should take a break of at least 15 minutes for every 2 hours you’re driving.

You can’t lump these all into one break, either. The 2-hour limit is the maximum amount of time you should be on the road at one time.

Motorway service stations are set up at a decent space between one another. You should be no more than 30 minutes away from one at any point.

Reflective studs in the road are colour-coded, making it easier to navigate on a motorway at night.

Use the different colours to guide you.

Sometimes temporary studs are put in place when there’s a contraflow in place or work is being done to the road, and these are fluorescent green or yellow.

By default, the speed limit on a motorway is 70 mph for most vehicles.

Some motorways use an active traffic management system – these are also known as smart motorways. These use variable speed limits that show up on signs overhead or on the side of the road.

As well as speed management, smart motorways also allow you to drive on the hard shoulder in specific circumstances.

These should be clearly indicated on the overhead signs. If you see a red cross above the hard shoulder, this means you should use it only in emergencies. If you drive in one of these lanes and it isn't an emergency you could land yourself with a £100 fine and 3 points on your licence.

These smart motorways also have a number of speed cameras in the overhead gantries. If you’re caught speeding on a motorway, you could be fined at least 150% of your weekly salary.

Can learner drivers drive on motorways?

Learner drivers have been allowed to drive on the motorway as part of their lessons since 2018.

To be able to drive on the motorway, learners have to be:

This isn’t a compulsory part of regular driving lessons. But if new drivers want to hone their skills further, the Pass Plus course does include motorway driving lessons.

If you’ve just passed your test, it might be worth considering a new driver car insurance policy to cover you while building up your experience.

Consider asking someone to accompany you

Although motorway driving is straightforward when you follow the rules, if you’re nervous it can help to have someone alongside you for support.

Check your route before you travel

Make a note of the number of the junction where you plan to come off.

Use your indicators and mirrors (without forgetting the blind spot) and be confident as you enter from the slip road. Other drivers should see you and let you in, but if you hesitate it can confuse them.

Although the default speed limit is 70 mph on a motorway, keep your eyes open for signs informing you of lower limits.

Keep checking your mirrors while you’re on the motorway so you know what's happening all around you. Indicate in good time when you want to change lanes. Again, when other motorists see what you’re planning to do, they should accommodate you.

Prepare for the junction

Ultimately, skill comes from experience – the more you use the motorway, the better you’re likely to be. But here are some key things to bear in mind.

Keep your distance from the car in front

Have a passenger with you

If it’s your first time on the motorway, it might be worth bringing a more experienced driver with you. Even better, you could ask a driving instructor to give you a proper lesson.

Plan ahead so you know your route

At the very least, you should know what junction numbers you need when you join and when you leave.

Run some basic checks on your car beforehand

Check your tyre pressure and make sure your oil is topped up.