The most common type of breakdown is a flat battery – and whenever it happens, it’s always inconvenient. To get yourself back on the road, you can bump start or jump start your car.

Here’s our quick all-you-need-to-know guide on how to bump start or jump start your car, as well as whether it impacts your car insurance. 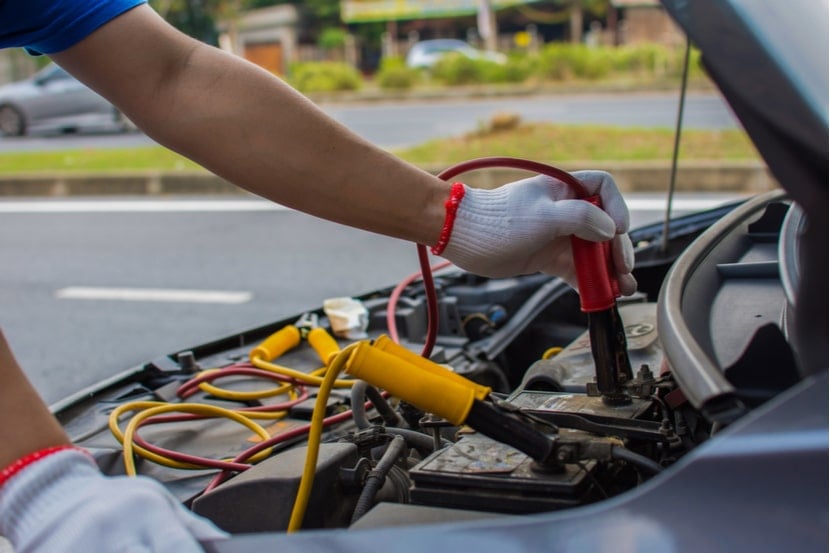 Bump starting and jump starting a car are both ways to get your motor going but they work slightly differently.

Bump starting: This is a way to get your car started and it’s also called push-starting or clutch popping. You need some willing volunteers to push your car along while you release the clutch and hopefully the car kicks into gear.

Jump starting: To jump start a car you usually need a second vehicle and jump leads. You connect the 2 and use the second car’s battery to bring the first car back to life. You can also get battery jump start kits that don’t require a second car.

How to bump start a car

You can only bump start a manual car. Here’s how to do it.

Sometimes the clutch is ‘dropped’ in second gear to its ‘bite’ point. The benefit here is it shouldn’t slow the car down as much.

With a bit of luck, the combustion cycle is complete and your car engine has burst back into song.

How to jump start a car in 8 steps

What do I need to jump start a car?

8 steps to jump start your car

What to look out for before jump-starting your car

If your battery is leaking or looks damaged it’s not a good idea to charge it.

It’s also important not to let the positive and negative cables touch – they can short out and damage your car’s battery.

A word on electric and hybrid vehicles here. It’s not a good idea to use an electric vehicle or hybrid as the donor rescue car. While electric vehicles often use an extra same-style battery, they can be damaged by jump-starting another vehicle, so stick to traditional petrol or diesel power.

How to stay safe when jump starting a car

Trying to fix your car’s battery when you need to be on the road is stressful. Jump-starting your car safely though is straightforward.

To keep your stress level down it’s a good idea to adopt a few common sense guidelines to avoid any risks.

How to safely remove jump leads after jump starting a car

Once the car is up and running, you then need to remove the jump leads. This is an important task so take your time and make sure you’re doing it safely by following these steps:

Using a battery jump pack to jump start a car

You can jump start a car on your own. To do this, you need a battery booster pack that has a red and a black cable. .

Make sure the jump back is fully charged, or has had a recent re-juice so your car’s got the best chance to fire back to life.

What is a battery jump pack?

They'll have a red and a black cable attached to connect to the positive and negative terminals on your car battery.

Car battery boosters can vary a bit in how they work, but they’re basically all the same – portable power on tap when you need it most.

Booster packs are brilliant in another way – you’re not dependent on bothering another person for help.

Don’t forget to keep it topped up, as some take 10 hours to fully charge. A re-charge every 3 months should do it.

How to use a battery jump pack

Can you jump start a stop start battery?

Yes you can jump start a car with a stop start battery. These are more common in modern cars and it’s best to check your car’s handbook first. However, most stop start cars can be jump started in the same way as a traditional key ignition.

Car won’t jump start? Here’s what to do

If you’ve tried everything and you still can’t get your car started, it’s time to call your car insurance company. It should be able to give you advice on how to get your car back on the road. You might only be able to do this if your insurer provides cover for your car while it’s not working at home so check your policy first.

If you don’t have the right cover, or you’re choosing not to claim on your insurance, your next route is speaking to a car mechanic or local garage for help.

If in any doubt, do check your car’s instruction manual. If you can’t find it, many are available online.

Is jump starting bad for your car?

It can be. It depends on your car and its age. All modern cars have an ECU, which is basically a computer – or your car’s brain.

It handles all the decisions about fuel mixture and even how your brakes and air con work. If your jump leads are short circuited and there’s a power surge this ECU can be quickly damaged. Some ECUs can be expensive to replace.

There’s also the risk of damage to any components a damaged ECU might cause. For example, a power spike might potentially compromise your car’s headlight units or exhaust system.

So if you’ve got a flat battery, be careful about how you handle the jump leads.

If you’ve a car which is started by an older-style key (rather than a push-start button), don’t leave it in the ignition when the jump leads are connected. But it’s fine to pop the key back into the ignition after the leads are clamped on.

Why do car batteries get flat?

Flat batteries often happen in cold weather during the winter when they’re under pressure to perform.

If you don’t use your car often it’s usual for car batteries to lose charge over time. If it keeps losing charge in normal conditions, there may be more of an issue.

Poor battery charging is sometimes linked to an alternator fault, it’s not always a battery issue. But remember, car batteries work a lot harder than they used to.

Modern cars, for example, turn their engine off at traffic lights to keep emissions down and to save on the cost of fuel. Yet wipers, lights, and audio stay on. There’s also more electronic ‘active’ safety tech on board.

Cars are also heavier than they used to be to meet safety legislation, so your multitasking battery really has its work cut out!

Bad weather’s often a big contributor here too. The lower the temperature, the harder the battery has to work.

If you tend to use your car for short runs your battery doesn’t get a chance to recharge properly. Short journeys limit a battery’s ability to keep its charge. Long term, that drives down your battery’s working life.

If you’re worried about your car battery and you don’t use your car much as you used to, you could buy a trickle charger.

Low-voltage trickle chargers can keep up the health of your battery without overcharging them. ‘Smart’ ones work out your battery’s charge level, then adjust the power.

This means you’re always ready to go, even when you haven’t driven your car in ages.

Trickle chargers are also great if you have a classic car that only gets a few outings a year.

How long do car batteries last?

A good quality battery can last many years. Even the lifetime of your car, if you’re very lucky. But like everything, all batteries die eventually. If yours is more than 5 years old and is struggling on colder mornings, get it checked out.