How to drive in heavy rain and wind

Driving in a downpour could be dangerous. Accidents become more likely as visibility worsens and water on the road increases the chance of skidding. 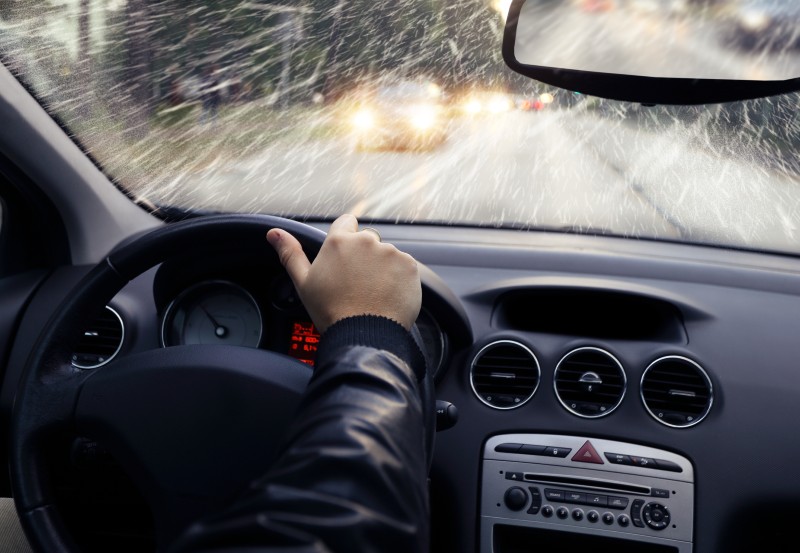 How to drive safely in wet weather conditions is a concern that’ll have crossed the minds of almost every driver.

This is because at some point the heavens will open while you’re on a road. And usually you can’t easily pull over, or if you do, you’re not sure what to do next.

Here, we look at some things you might consider.

Tips for driving in the rain

It takes just six inches of fast-flowing water to knock you off your feet, while one foot of water is enough to float a car. In short, water presents huge hazards to motorists.

To stay safe, you should try the following:

Before embarking on a journey when heavy rain is expected, flick your wipers on – ensure they don’t drag as this might mean they’re not efficient.

Reducing your speed in wet weather should give you more time to react and slow down, cutting the chance of your car sliding into trouble.

Your car could skid on wet leaves just as easily as on ice.

If there’s a lot of rain on the road, slow right down and keep in a low gear to avoid the water causing you to stop dead or stall.

Be aware of floodwater on bends

If you don’t know when you’ll come out of the water, take a detour, if it’s safe to do so.

Drive on the highest section of road

Use the edge of the curb to gauge water depth.

So long as no one’s right behind you, test your brakes as soon as you’re out of the water.

Now this is a common driving law confusion, but we're here to settle the debate.

Splashing pedestrians is illegal and dangerous behaviour that could have an impact on other drivers, as your concentration should be fully on the road.

What are the stopping distances in heavy rain

Aside from the main tips listed above, it’s well worth giving a thought to stopping distances.

Your motorbike or car tyres might not grip the road anywhere near as effectively as they do on dry tarmac.

Also, spray from the vehicle in front could make it harder for you to see ahead.

When it comes to how much distance from the vehicle in front is safe enough, the rule of thumb is two seconds.

So, for wet and rainy conditions, this goes up to four seconds.

This should help give you both the thinking and braking time to stop before slamming into another car, pedestrian or cyclist.

Remember, spotting bikes and people isn’t as easy in the rain.

What should the time gaps be between cars on a wet road?

The two-second rule is a fairly good indicator, but if you want more detail on stopping distances, it goes like this:

Can I drive through flood water?

The simple answer is no. As we said at the start your car might float or aquaplane in just one foot of water.

Any more than that could cause it to stall, resulting in water entering the engine, which could be expensive to fix.

The damage to your car could be higher if the water’s fast-flowing and carries your car into the path of other cars and walls.

Also, visibility might be next to zero below the surface.

This means that if a tree has crashed down or a manhole cover popped out of place due to water pressure, your car could be a write-off.

Finally, driving in flood water could endanger your life and those of your passengers.

Driving in high winds, especially where gusts can come out of nowhere could be dangerous.

This is particularly the case in exposed areas, such as on bridges and across marshes and plains, as well as in tunnels.

To stay safe, you should take note of the following advice:

Keep both hands firmly on the wheel

This should help you maintain control if your car is buffeted off course.

Be aware of big vehicles

Lorries, caravans and coaches can act like a sail in strong winds, and move out of their lane suddenly.

Give them a wide berth, and avoid overtaking unless you absolutely must.

Give cyclists and motorbikes more room

A sudden gust could cause bikers to veer across the road.

Every second counts if a tree falls in the road ahead or another road user falls foul of a gust.

Decent comprehensive car insurance policies should cover you for flood damage. However, check your policy if you’re expecting a storm.

It could be the case that your insurer won’t protect you if you parked at the bottom of a hill next to a river and flooding was predicted.

Also, you might not be covered if you drove into a flooded street where the water levels were more than just a few inches.

These exclusions are included because the insurer might expect you to do all you can to avoid the need to make a car insurance claim.

What should I do if my car is flooded?

Put on waders and gloves

Don’t enter flood water without protective clothing, as sewers could have burst, meaning the water is contaminated.

Don’t try to start the car

If your car is flooded, leave it where it is. Otherwise, you could cause more damage to the engine, electrics and catalytic convertor by turning on the ignition.

They might insist on you using one of their approved garages to fix the problem, and not going through them could create problems with your claim.

Clearly, you’ll have to wait until water levels subside before a mechanic can do their job. The same goes for professional car cleaners.

On the off-chance that the insurer disputes your claim, perhaps in relation to the level of damage, this evidence might help.

Make a note of any possessions you have in the car that were ruined, and dig out the receipts.

If your car breaks down, don’t panic. Get out if it’s safe, close all doors and windows and lock it.

The last thing you want is someone coming along when the storm has passed and ransacking your car.

Your insurer should cover you if you’re driving during a red weather warning, which is issued by the Met Office.

Weather can be unpredictable meaning there might not be a lot of notice before the event strikes.

All you can do is try to avoid driving in fierce weather.

But if you’re caught in a ferocious storm and an incident occurs, remember that’s what you have insurance for.

Here’s what the Association of British Insurers has to say on the matter:

"Should you be driving during a red weather alert your insurance will still be valid. We do advise that you pay careful attention to all local authority and police warnings.”

What to do if you break down during a storm

Breaking down in a storm is no picnic. A few things are bound to happen that make life even more uncomfortable almost immediately. Other problems might be avoided later on, if you know what to do.

Here are a few helpful hints on what to do and what to avoid in these circumstances: