Make the best of a bad situation with this helpful breakdown kit. 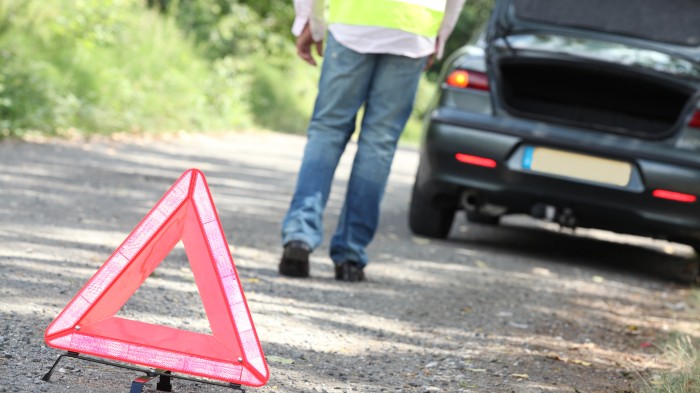 Breaking down in the car is never fun. It's confusing, a little scary and far more common than you might think.

According to Highways England, 224,225 cars broke down between April 2018 and March 2019. This was the last year before the coronavirus pandemic hit, so there was a lot more traffic on the roads then.

With life returning to something approaching normal, it makes sense that the number of vehicle breakdowns might, unfortunately, rise.

In fact, there’s reason to think that the totals could be higher than normal as many cars might have been parked up for long periods.

If you want to limit the inconvenience associated with your car packing up mid-journey, breakdown cover could be an option.

However, your service provider might take some time to reach you, especially if your car has overheated in the middle of a motorway traffic jam.

This is why it makes sense to keep some supplies with you so your wait is as comfortable as possible.

Being able to call for help is essential if you break down. But if you're too far away from the nearest SOS phone, you'll need a decent charge on your phone.

Having a fully-charged power bank in the car ensures you'll have enough juice at all times. But to be doubly certain that you don’t get caught out, keep a spare charging cable attached to the power bank.

Making yourself visible to other drivers is essential when you break down.

This is especially true at night or when there's rain, mist or snow - basically the kind of weather when breakdowns are more common.

Hi-viz or reflective clothing makes you more noticeable, and so safer – it could literally be a life-saver. That said, it’s no suit of armour.

So, if you breakdown on a blind corner or a busy stretch of road stay clear of the carriageway after turning on your hazard lights.

Don’t stand directly behind or in front of the car just in case another vehicle hits the car.

That said, if you break down on a road and you can’t pull over to the curb or hard shoulder, remain in your car with the seatbelt on until it’s safe to leave.

Put the hazards and side lights on, and when you exit close the doors.

When it’s safe to leave the car, ensure all your passengers know where to go. Leave pets in the car, as they could be difficult to control and create problems. Stay a safe distance from the road.

Most triangles are compact so they fold out and don't take up much space in your boot.

This doesn’t mean just because you have one you should risk life and limb to use it.

As with everything else on this breakdown checklist, exercise caution before making any decision.

If it's safe to do so, you should put a red warning triangle on the road at least 45 metres (50 yards) or 60 steps away from the car.

Most modern cars don't come with a full-size spare tyre, mainly because they’re heavy and rarely called into use.

If you have a spare, it’s likely to be a lightweight model that’s really only intended to get you out of harm’s way.

On this point never attempt to replace a spare on a motorway, A-road and other busy or dangerous places, such as junctions. Likewise, if visibility is poor. It’s just not worth the risk.

This is a foam sealant that blocks the puncture hole and re-inflates the tyre at the same time.

It’s designed to allow you to make it to the nearest garage, but no farther.

Be warned that some garages can't repair a tyre that has Tyreweld inside, as it can be difficult to remove.

Inspecting your tyres in the dark isn't fun. So, grab a powerful LED torch to light your way. A wind-up torch is even better since you'll never need batteries.

If you break down on a motorway, for example, you’ll need to vacate the car.

This means you’ll probably spend a dull hour or so on an embankment out of the way of traffic.

As such, you should ensure you have warm, waterproof clothing, and ideally a picnic blanket to sit on while you wait for the recovery vehicle to arrive.

If you want to go even further, grab a foil blanket, which is best at keeping in body heat.

Everyone needs water. So, if you're stranded at the side of the road, it's best to stay hydrated.

Grab a metal or BPA-free plastic reusable bottle and keep it filled in the boot of your car.

It's worth refilling it every now and again so it's less likely to taste stale. Also, don’t forget a flask of tea or coffee.

If you’re travelling a fair way in cold weather, the warm drink might help take the edge off an otherwise miserable experience.

Even if it is only lukewarm by the time you need it.

You can pick up a tow rope for less than a tenner. They take up a little more room, but could be worth investing in.

There’s no limit on how long or short they should be, but common sense dictates the distance between the two cars should been two vehicle lengths.

This is so the driver of the towed vehicle has time to react if the one in front brakes.

Equally, the distance should not be much more than two cars, to avoid another motorist cutting in.

The towed vehicle is required by law to have an ‘On Tow’ sign displayed at the rear, so think about picking one up when you buy the rope.

Always agree on the route you and the other car are to take, to avoid unexpected manoeuvres.

Remember you can’t enter a motorway if you’re being towed – although clearly you can leave one if that’s where you broke down.

Sometimes your car just needs a boost, particularly if it’s not been run in a while and the battery is a little flat.

Jump leads transfer energy from a fully-charged engine to a tired one.

Only hold the clamps by the plastic handles.

Ensure the two cars don’t touch as this can lead to a short circuit, and don’t attempt to start the engines until the cables are applied, and no one is near the engines.

Some modern cars have jump start connections. Familiarise yourself with these by looking at the manual, as in some cases you won’t connect direct to the battery.

If you’d rather not rely on the kindness of strangers, you can also buy self-starting jumper kits.

You can transport a fuel can provided it’s UN certified by an Approved Test House, and embossed with a Certification number.

Decent retailers sell them, and they aren’t expensive, so don’t opt for a knock-off can picked up at a car boot sale.

You’re allowed to carry fuel in a plastic container with a maximum capacity of 10 litres, or 20 litres if it’s a metal can.

Don’t carry more than two cans in your boot as this is considered dangerous.

Be aware that service stations might limit the number of cans or the amount you can put in one.

Incidentally, you don’t need to fill your can and keep it in the boot. An empty one is fine, provided you’re willing to trudge off to the nearest filling station.

We mentioned water, tea and coffee earlier. Well, it also makes a lot of sense to have some snacks to hand, to stave off the boredom and hunger pangs.

Non-perishables could be a smart idea. Chocolate, crisps and so on might also work.

If you opt for perishables, apples and bananas could be a good idea as they travel well. Soft fruit is messy. Either way, pack wet wipes as well to freshen up.

It's always handy to have one of these in the car in case someone needs patching up.

You can pick one up for less than £10 at the supermarket, service station, and other convenience stores. Check how many plasters you have and top up as needed.

Also, cheaper first aid kits tend to come with almost useless scissors, so invest in a robust pair if the one you have would be better suited to a Christmas cracker.

Say you’ve been travelling in a nicely-cooled air-conditioned car, that suddenly packs up on you.

The chances are, amid all the stress and hassle you’ll not notice the sun on a blindingly hot day.

Now, it’s unlikely you’ll have a parasol to hand, but you should have sun lotion for all passengers, and hats too.

You could well be stood by the side of the road on the hottest day of the year and will welcome any protection when you get rescued.

Along with water, this should be high on the list during the summer.

Best to be prepared

All this may sound like a lot of effort and some extent, but it isn’t really.

They take up hardly any room, and with others, such as refreshments, it might be silly to go without.

Of course, you could help make things easier by ensuring you have breakdown cover, perhaps as part of your annual car insurance policy or as separate cover.

But even if you do, these tips should help make the time you spend waiting for a recovery service to arrive more comfortable and less stressful.