See what you could save on your energy bills

Get an energy quote

We’re all tightening our wallets right now. So it’s more important than ever to make sure that we only use as much fuel as we need, and that we can afford it.

Sadly, there are lots of reasons why a household can struggle with fuel costs. Maybe there isn’t much money coming in, or the household uses a lot of energy. Whatever the reason, if a household finds itself below the UK poverty line after paying the energy bills, that’s called ‘Fuel poverty’.

Fuel poverty in the UK

As the map below shows, some areas in the UK have more households living in fuel poverty than others. This could be because an area tends to have higher fuel costs or lower-than-average household incomes. 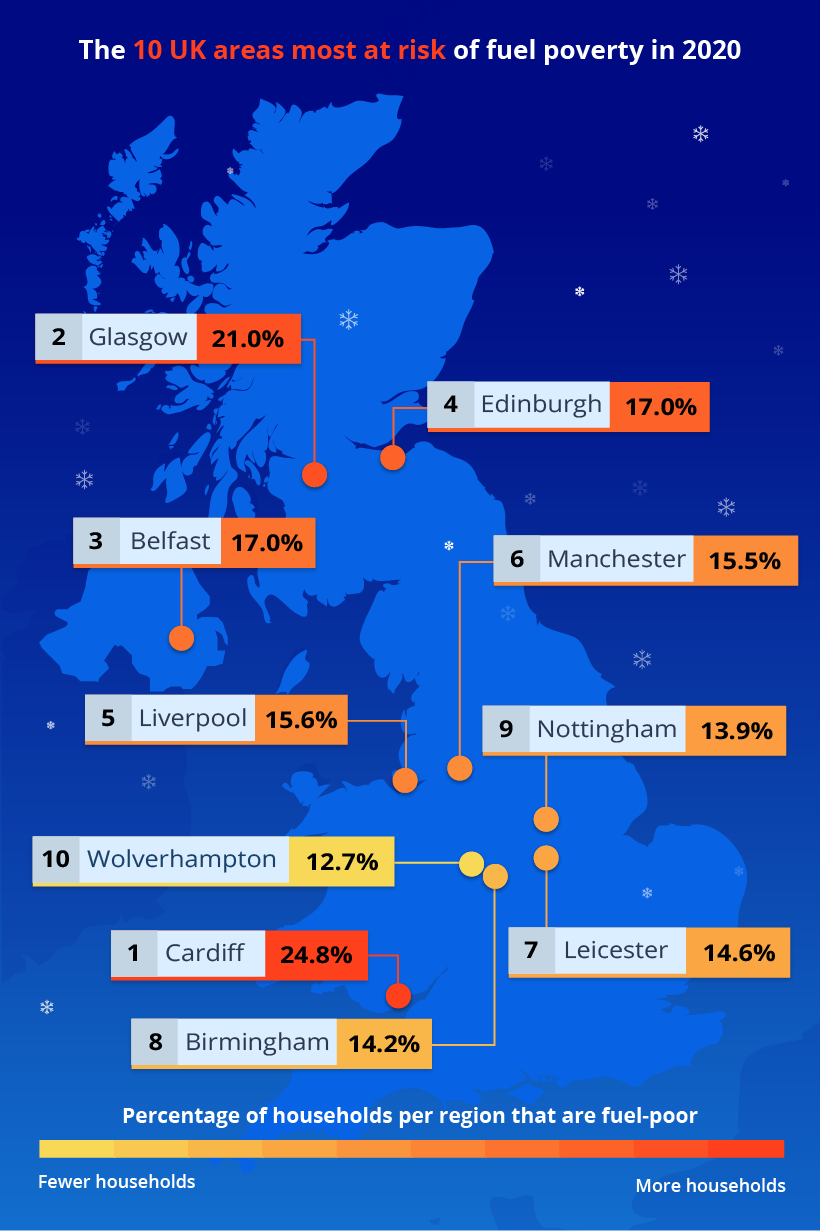 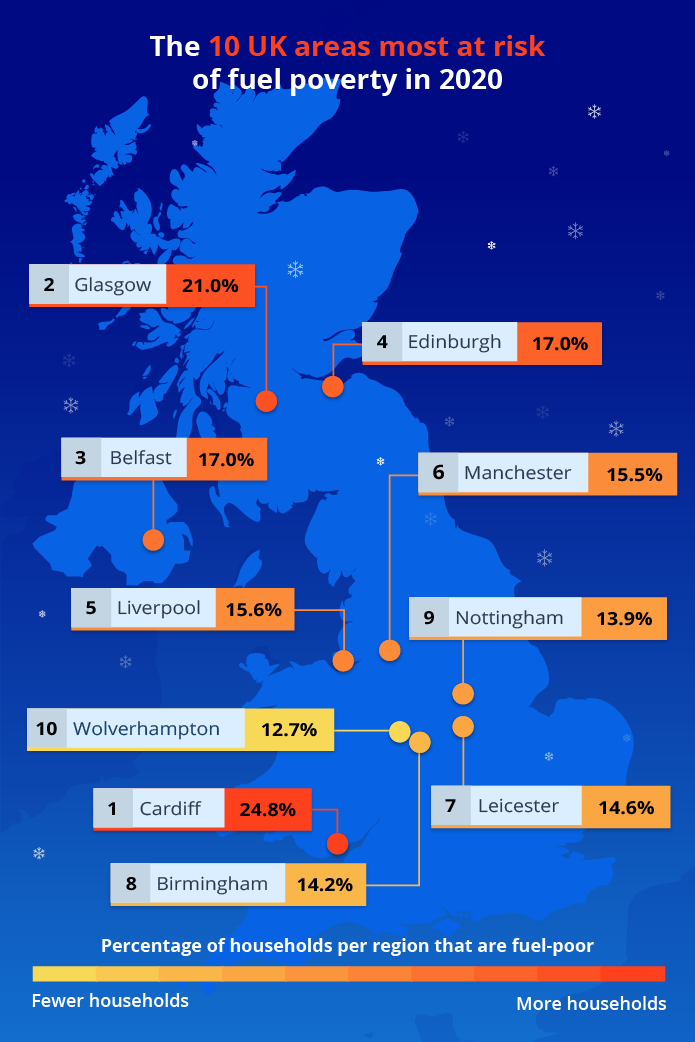 Which areas are most at risk of fuel poverty?

Cardiff takes the top spot when it comes to fuel poverty. That’s because the average annual take home pay in the city is just £24,958, while the energy costs are close to £700.

Henry Muss, climate resilience expert and founder of The Climate Resilience Company, gives another reason for fuel poverty in Cardiff: “Apart from the ratio of household income to energy bills being the main reason for the high levels of fuel poverty in Cardiff another may be the quality and age of the housing stock. Older houses are likely to be more difficult to heat, having poor levels of insulation, resulting in higher energy bills and greater levels of fuel poverty.” 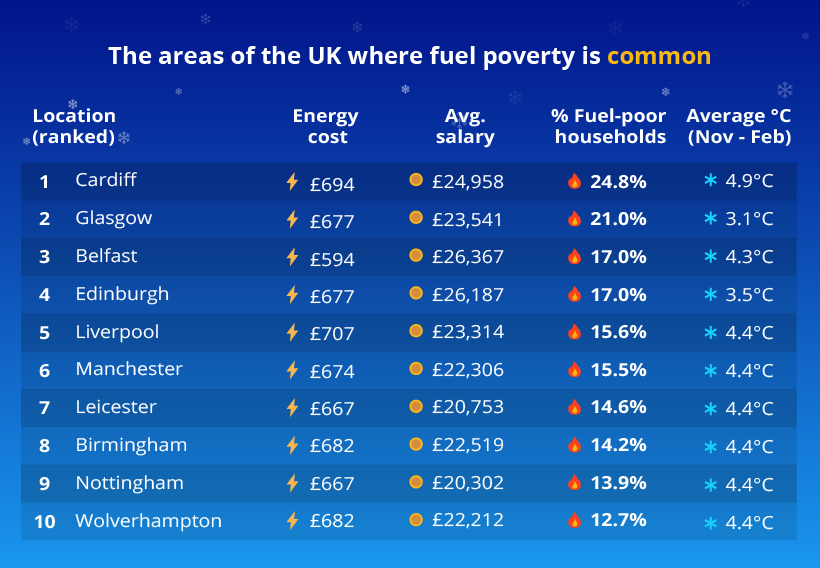 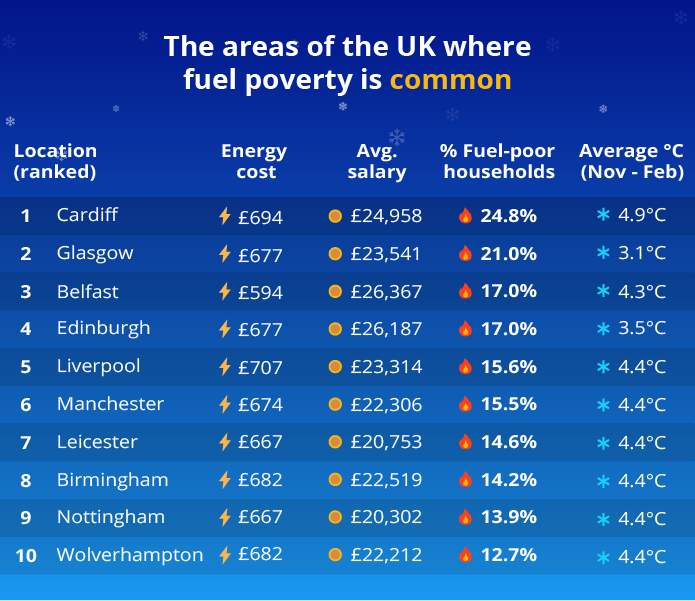 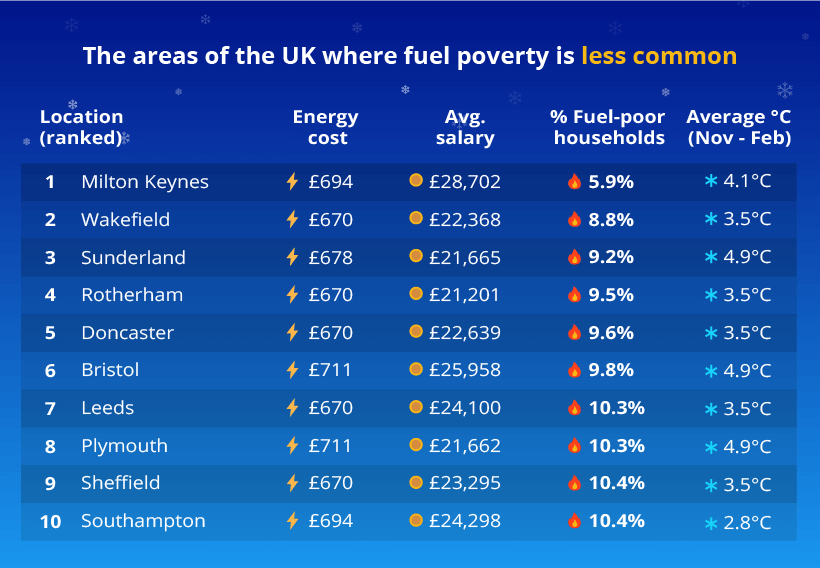 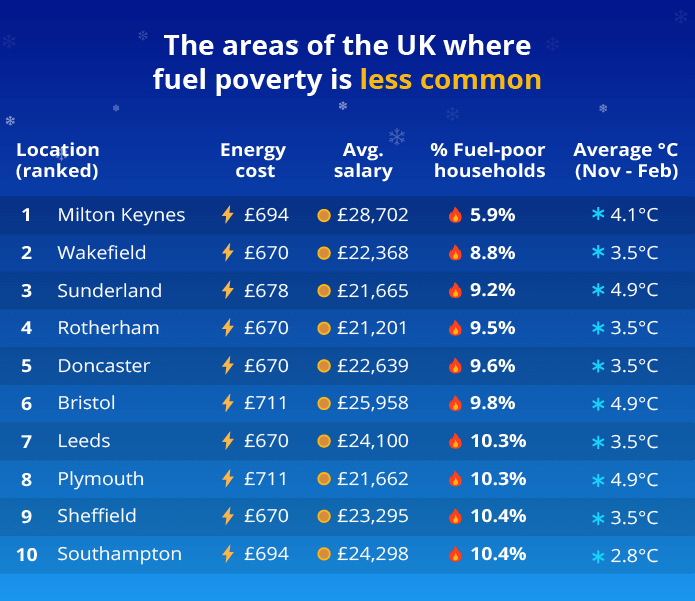 On average, just 12% of households in London are living in fuel poverty, but in some boroughs that number rises to 18%. 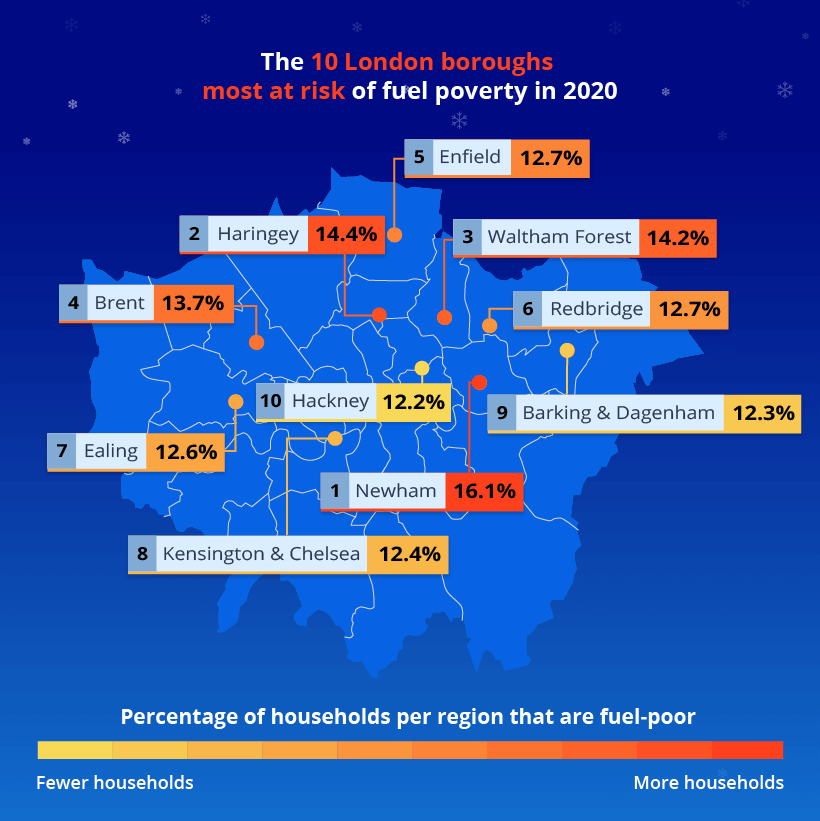 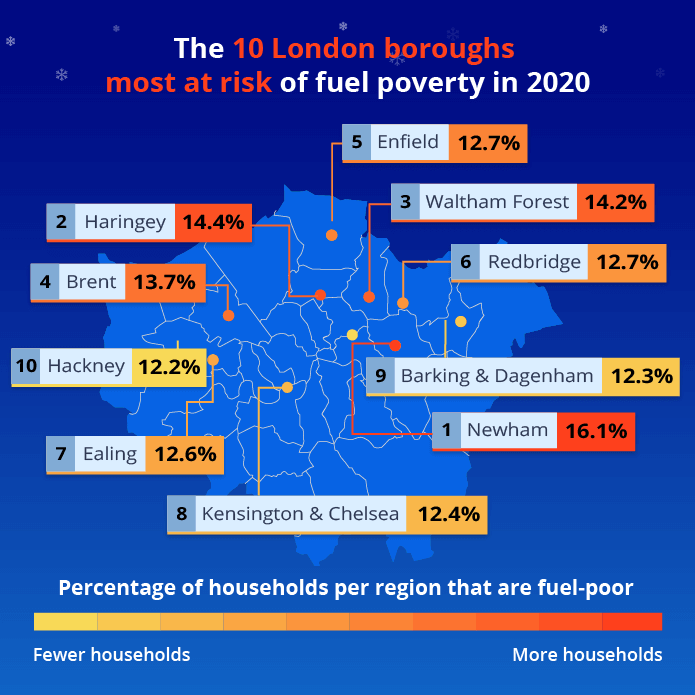 Fuel poverty in the north and south of the UK

The north of the UK tends to have colder temperatures than the south. So people living in the north may face higher energy bills.

In Glasgow, the average winter temperature is just 3.1 degrees Celsius. So it’s no surprise that two out of five of the UK’s fuel poverty cities are in Scotland.

Here are the top five worst areas for fuel poverty in the north and the south of the UK. 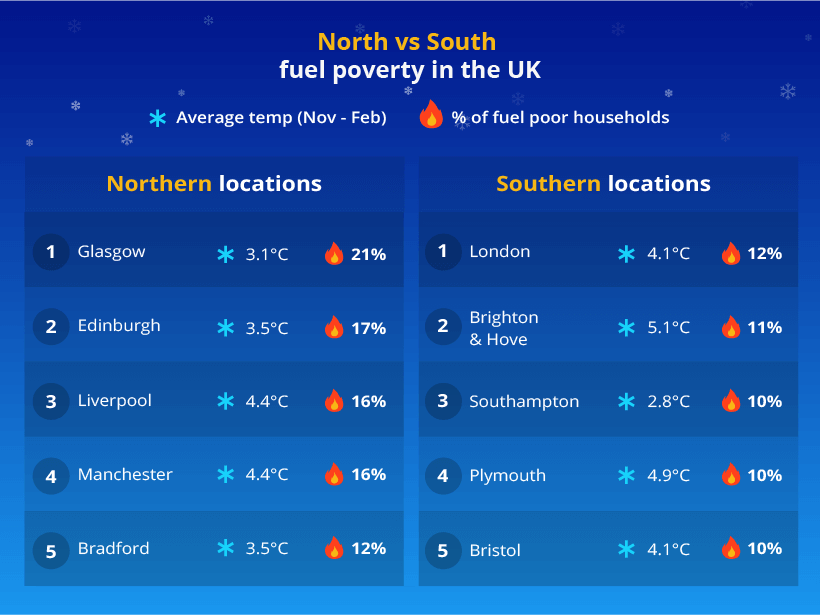 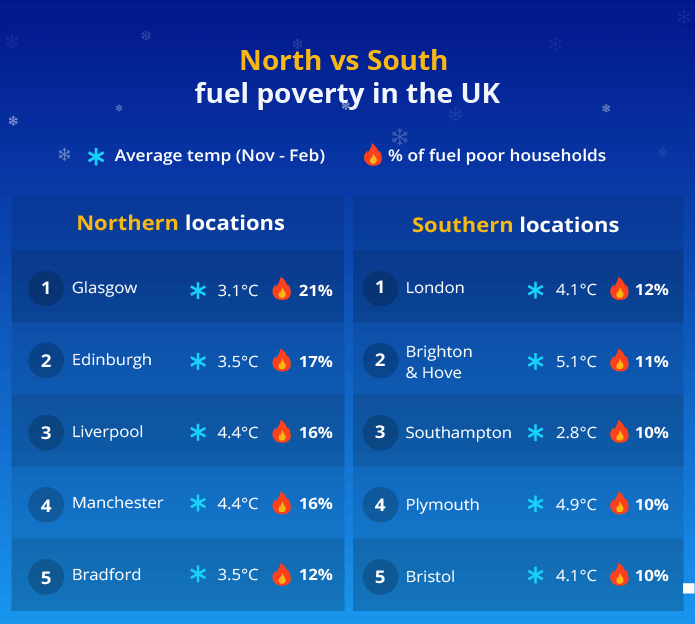 How can I escape fuel poverty?

Looking to cut unnecessary energy costs in your home? Our in-house energy expert has some top tips on how to reduce your fuel consumption and energy costs. 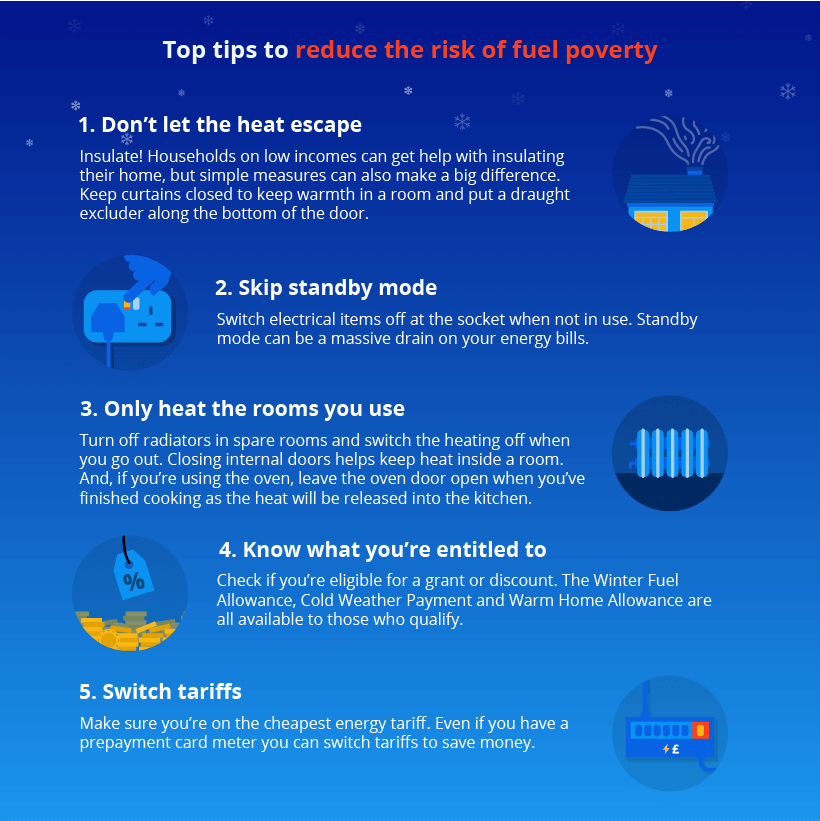 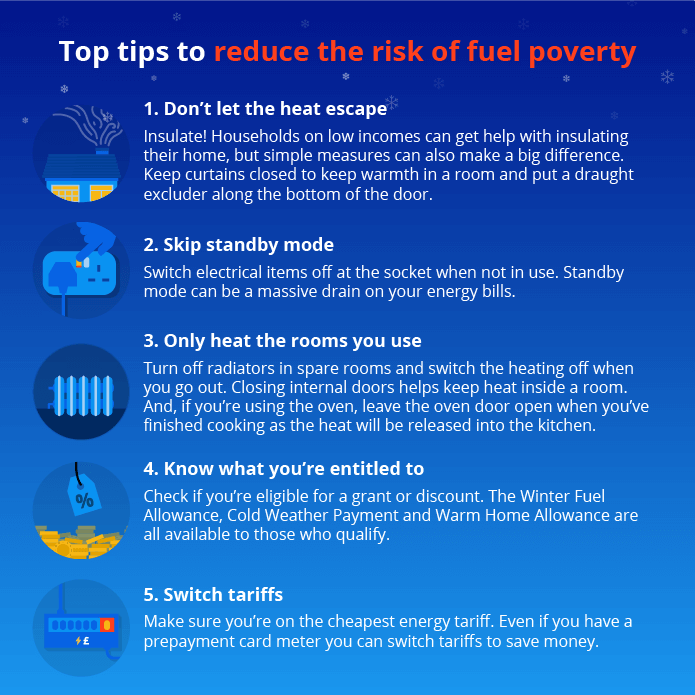 Still unsure on how you can save on your energy bills?

Find out how to make your home energy efficient

The latest fuel poverty statistics have been analysed for the governments of the UK, Northern Island, Wales and Scotland. The London figure was created as a median from the constituent boroughs.

Average salary data for all areas in the UK and Wales is based on median rather than mean values.

Average winter temperature refers to the average temperature per region for the months of November, December, January and February.

The average household for the purposes of data has been taken to be 2.4 people.