How to transfer car ownership

If you sell your car, it’s best to notify the DVLA immediately so the new owner is registered as the keeper. Once they know you’re no longer the keeper, the DVLA should automatically refund you the car tax that’s left.

But how do you officially transfer car ownership? Let’s take a look. 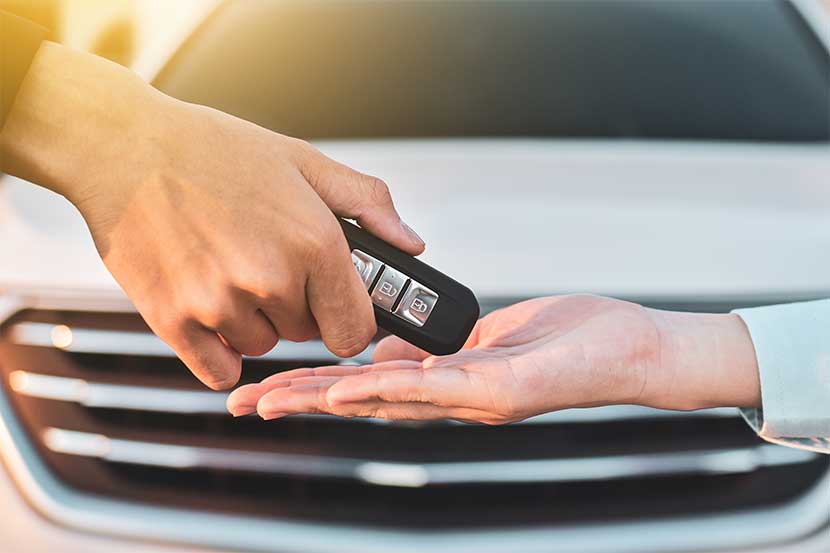 What do I need to transfer vehicle ownership?

To transfer car ownership you need the V5C certificate, also called the logbook, in which you're registered as the keeper. You’re required by law to give the new owner the detachable V5C/2 slip that’s on the V5C certificate when you sell them the car.

Having sold the vehicle, you need to formally transfer car ownership with the DVLA so they register the new owner as the keeper. If you choose to do this by post, you have to send what remains of the V5C to the DVLA. Don’t forget to include the new owner’s details filled in on the logbook. You need the new owner’s full name and UK address.

You can also do the transfer with the DVLA online. But as well as the new owner’s personal information, you need the 11-digit reference number that’s on your V5C.

Why do I need to notify the DVLA of changing car ownership?

Whoever’s listed on the car’s V5C certificate as the current owner is the official keeper of the vehicle. They're responsible for getting it taxed, MOT’d and insured.

The person named as the keeper is also the initial contact for the police if someone driving the car commits a traffic offence. For example, if someone is caught speeding by roadside cameras.

If you fail to update the DVLA of the change of ownership, you may get a letter with a fine of £55. This fine is reduced to £35 if paid within 17 days.

If this is still not paid, the case could be put through the magistrates’ court, with a maximum penalty of £1,000.

How does the V5C certificate or logbook work?

The DVLA creates the V5C when a car is first registered and given to its first owner. Assuming ownership is being transferred through the post each time ownership changes, the V5C has to be updated with the new owner’s details. It’s then sent back to the DVLA.

If you’re the existing owner, your name and address should already be on the V5C. Provided you’re transferring car ownership to the person who’ll be the new keeper of the vehicle, all you need to do is complete section 2. This is headed ‘Selling or transferring my vehicle to a new keeper.’

You must fill in the new owner’s full name and UK address. You then post the logbook to the DVLA. The new owner should then get a new logbook from the DVLA within 4-6 weeks.

If you’re selling the car to a dealership or motor trader then you need to fill in section 4 instead. Section 5 of the V5C is for those who are looking to permanently export the car.

The V5C also includes various bits of information on the car itself, including:

Can I transfer car ownership online?

They can aim to send a fresh V5C to the new owner in just 3-5 days. This is a huge improvement on the 4-6 weeks it takes using the postal transfer process.

To transfer car ownership online, you need the 11-digit reference number that’s on the V5C. As with the postal transfer, you also need the new owner’s full name and UK address. All you need to do is input these details via a form on the DVLA portal.

What about car tax?

Whoever’s named as the registered owner of the car on the V5C is also responsible for taxing the car. Car tax isn’t transferable between owners of a car, including family members.

The new owner becomes liable for tax on the car from the date the DVLA is notified that official ownership has changed. They must either tax the vehicle they’ve just bought before they drive it or declare it off the road (SORN).

Provided the seller notifies the DVLA of the change, it should automatically refund them for any months where there’s road tax left on the car. The annual flat rate of road tax is currently £165 for petrol, diesel cars and hybrid cars.

How do I transfer car ownership to a family member?

Transferring ownership to a family member follows the same process as if you were selling the car to a stranger.

You can transfer ownership using the same online forms or by following the usual process using the V5C certificate via the post. The DVLA isn’t concerned with whether any money has actually changed hands or not.

Whoever’s registered as the new keeper must pay tax on the car straight away unless it’s going to be declared as being off-road (SORN).

As the seller, you can transfer car ownership online using the 11-digit reference number that’s on the V5C. Then fill in the family member’s name and address when prompted to register them as the new keeper.

If you choose to do the transfer by post, you need to fill in section 2 of the V5C and send it to the DVLA. You need your family member’s details to do this..

What about car insurance?

By law, the car should have a valid car insurance policy before the new keeper takes it on the road. That includes any family members, like your child, to whom you might've transferred ownership.

Third-party car insurance is the legal minimum, though this only covers damage or injury suffered by other people and might not protect you or your car. Third-party fire and theft (TPFT) offers some limited cover for your car.

However, fully comprehensive car insurance often provides the best level of protection. And many comprehensive policies offer a range of benefits to protect you and your car, as well as everything that comes with TPFT.

You also have the option of choosing temporary car insurance to cover you until you can arrange a longer-term solution. Temporary car insurance gives you short-term cover for as little as 1 hour to up to 28 days. So, if you've bought the car and just need cover to get it home, this could be an option for you.

If you’ve transferred car ownership to your child and they’re a young driver, insurance costs might be particularly high. Fortunately, there are ways that younger drivers can access comprehensive car insurance at an affordable price.

Here are some tips to lower your car insurance costs: