A driving theory test app can be a relatively easy way of practising for your theory test. Some of the theory tests are free, but even the ones you have to pay for aren't too expensive. Here are some of the best ones we’ve found and some tips to help you choose the right theory test app. 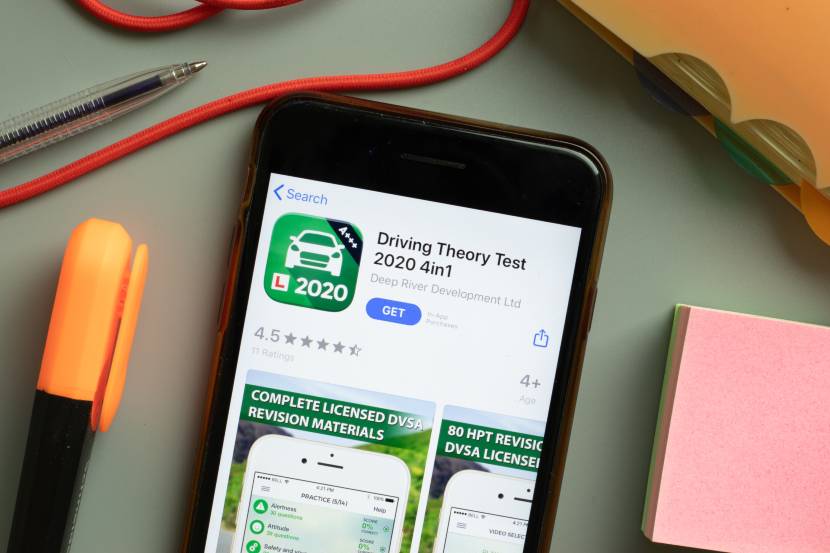 Which is the best app for the driving theory test?

When you’re learning to drive, it’s worth investing in any tool that can make the process easier. One way to help you pass your theory test is by using an app.

But it’s hard to know which one to choose given that there are so many out there. Most have similar features like mock tests. But it mostly depends on what specifics you're after and how much you’re willing to pay.

You can choose whether you want a free app or pay for one. Either way it’s worth looking first at the reviews, and then what’s included.

If you’re looking at free apps, you might find that you have to pay to access certain content. For example the full up to date Highway Code or more in depth DVSA information. Some might only allow access for a certain number of modules.

If you can spare around £5, it could be worth it to get an app with all the materials you might need. Most paid-for apps have the full up to date Highway Code included, as well as the latest testing topics. They often include videos that help you practice the hazard perception test too.

Most free apps come with plenty of information though. Just remember to check that you have the most recent version of the Highway Code and that the app itself is up to date. You can usually check this in the app’s description.

Review ratings correct as of 30 December 2022

Which driving test apps do I have to pay for?

The Driving Theory Test app also has ‘coach mode’, which can help you to focus on the revision areas you need most help with.

Everyone has different learning styles so a useful feature of this app is that you can try it  before you buy it. The free trial has:

Perhaps the biggest selling point of this app is that it’s the Official DVSA test app. So you know all the information should be accurate and up to date.

The app offers exclusives that other apps might not be able to offer. For example, every single theory test revision question (for car drivers) is included in the app.

You also have access to 9 new practice multiple choice video clips that cover the recent changes to the car theory test.

You might not need to bother buying the Highway Code either, as it’s included within the app. That’s a saving of around £5, and every saving helps when it comes to the cost of learning to drive!

After you’ve revised, you can test your knowledge with a timed mock test.

The app can also send you notifications as you get closer to your theory test so you can keep on top of your revision. You can also download a voiceover separately so you can learn on the go.

A good feature of this app is the pass guarantee - the app claims that if you don’t pass your theory test first time, you get your £23 test fee back.

For the hazard perception part of the theory test, the app shows you videos that you answer multiple choice questions on.

Like the DVSA app, the 4 in 1 kit also has a voiceover so you can learn on the go.

You can take mock tests, which don’t have a timer on them. Although having a time limit is good for the later stages of your revision, having no timer could be handy if you’re just starting out.

Perhaps one of the best features of this app is the learner plan. If you’re struggling to know where to start with your revision, the 4 in 1 kit’s learner plan can guide you through from start to finish.

And as an added bonus, you have access to over 160 virtual practical driving lesson videos. The virtual lessons go through manoeuvres and routines that are key for driving - which should stand you in good stead for your driving test.

The app contains the latest version of the Highway Code, and all the information used is licensed from the DVSA.

There’s also a free version of this app, the Theory Test 4 in 1 UK Lite. This contains ads, and there may be some limited access. But most of the features above are included in this free version.

James May can help you pass your theory test in this app. Which could be a bonus if you’re a fan of his.

The app provides a daily training plan, which is ‘algorithmically’ tailored to you.

The app also boasts that you learn the ‘the James May Way’ which is apparently common-sense learning.

“I’ll guide you through the DVSA driving test learning materials myself! The app will remember what learning you do here, which means your training plan will always be up-to-date with what you do or don’t know.”

You can also benefit from his 40+ years of driving experience and ‘resulting wisdom’ and learn through his common-sense easily understood guides.

One key plus-point is that he also provides voiceover walkthroughs of all 34 DVSA 2022 practice clips.

There’s also a game which helps you make sense of road signs and braking distances.

The app has the standard features, for example unlimited amounts of timed mock tests, access to the Highway code and DVSA learning materials.

Are there any free theory test apps?

It’s great to have free options when it comes to driving test theory apps, particularly as learning to drive is already expensive.

The following apps are free, but often they have a paid version that has full access to materials like the full Highway Code or DVSA mock tests.

This app uses learning materials from the DVSA, which should give you peace of mind when you’re revising. It includes theory tests for motorbikes and HGVs.

The Vehicle Smart theory test app has many of the features of a fully paid-for app.For example, it includes modules on traffic signs and unlimited mock tests.

The mock and hazard perception tests are all timed too, just like the official theory test.

The only downside to this app is that you have to pay £3.99 to access the full version of the app. By upgrading you should get access to the full Highway Code, all the DVSA testing topics and more hazard perception videos to name a few.

Mock tests are also included, with an unlimited number of tests available.

As thrilling as it is, we may not have the time to read the entire Highway code when we’re learning to drive. The app’s study guides filter the information and prioritise the sections of the Highway Code that are covered in the theory test.

You’re also able to track your progress within the app by reviewing your performance in the mock tests, and learning from the mistakes you make.

This free app has unlimited mock tests. They’re designed to be just like the DVSA exam itself.

You can also create a random test from the bank of 850 official DVSA theory test questions.

If you get a question wrong on this app, you’re able to flag it and review it. This could come in handy for some last minute revision on the morning of your theory test.

You also have access to the full Highway Code, along with UK traffic and road signs.

How much is a driving theory test?

According to GOV.UK the theory test costs £23 for cars.

To book your test you need your provisional licence and your credit or debit card.

Once you’ve passed your theory test, you could start thinking about booking your practical test.

The practical test costs around £62 on weekdays. If you’re taking your test on the weekend or on a bank holiday it costs £75.

It’s a lot to pay, but being able to learn in your own car could help you pass your tests first time.

If you do decide to learn in your own car, remember to consider learner driver insurance. This protects you in case something goes wrong.

There's also the option of temporary learner driver insurance. Temporary car insurance gives you short-term cover for as little as 1 hour to 28 days.

How can I pass my theory test quickly?

There are a few things you can do to improve your chances of passing your theory test quickly: