Skip navigation
Retrieve a Quote My account
You are here:
02 Aug 2021

How many miles can you drive on empty before getting stranded? 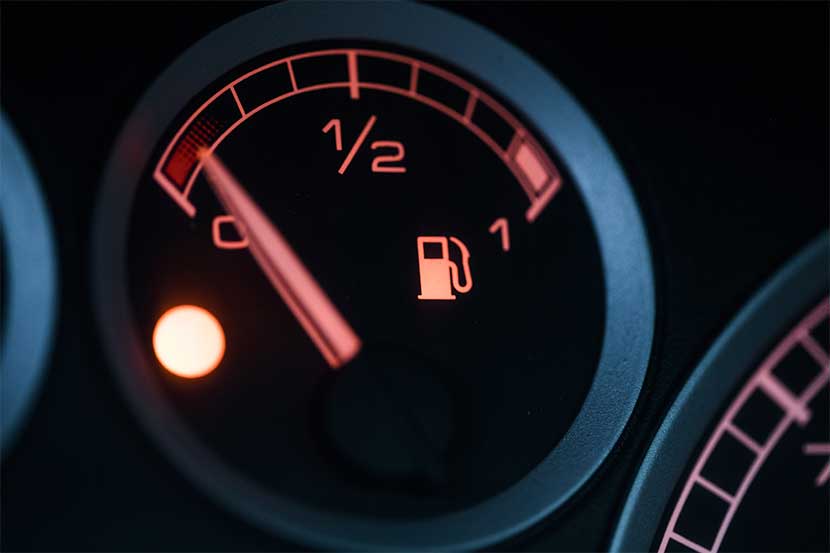 Once that little fuel light comes on, how long do you have left?

Playing the game of ‘How far can I go before I have to fill up my tank?’ has left many a motorist stranded and confused at the side of the road after a breakdown.

Surely once the little petrol light comes on, you’ve a decent amount of mileage left, right?

Read on and we’ll show you just how far you can go, and what you can do to improve your fuel economy.

How far can I drive once the fuel light comes on?

It varies from car to car, and it also depends on your driving habits and the road conditions at the time.

The approximate range on the fuel gauge – if you have it – is usually based on average miles driven. So it might not be accurate considering your current driving conditions.

What happens if I run out of fuel?

You might feel your vehicle juddering as you try to accelerate as well as hearing spluttering noises. Eventually, your car will come to a complete stop – it can’t run without fuel!

Running out of fuel in itself isn’t illegal, just a bit stressful. But if you end up stranded in the middle of the road or your breakdown leads to an accident, you could be prosecuted for careless or dangerous driving.

This could lead to points added to your driving licence, which in turn could raise your car insurance costs.

Is the 50-mile limit accurate?

A common belief is that a car can go for roughly 40-50 miles after the light goes on, but that can be tricky to track. So, can you trust the fuel gauge on your dash?

There's no statutory amount that should be left in the tank before the dashboard warning light comes on. So, you shouldn’t assume that you have a set number of miles left when it first alerts you.

For many cars, the warning light comes on when there is between 10% and 15% of the tank’s capacity left. When it starts flashing, you’ve probably got less than 10% left.

But while 50 miles seems to be what most drivers believe the average range is, in reality it varies significantly across different makes and models.

It’s best to get in the habit of thinking of the low-fuel light as a final warning rather than driving around with it on.

With that in mind, here are some of the UK’s top cars, and how far each might go after the fuel light comes on*:

It’s better to be safe than sorry, though, so if you have an empty fuel gauge, fill up your tank as soon as you can.

*All fuel data is based on real-life information submitted by independent drivers on TankOnEmpty.com. Figures correct as of 01/06/21

What are the dangers of driving on an empty tank?

As the fuel level gets low, the car will start picking up debris from the bottom of the tank. This could damage both the fuel filter and the pump. The catalytic converter could also be damaged.

If you run out of petrol, it can cause the fuel pump to run dry, which could mean a garage bill of up to £200.

With diesel cars, the engine management system shuts down before you run out of fuel, preventing damage to the car. But with petrol cars there's no system like that in place.

Getting stranded is another concern that should be taken seriously. You might be on the motorway with cars whizzing past you at high speed. But wherever you break down could be dangerous, especially if you’ve broken down after a bend in the road.

You can take a look at our top tips to improving your fuel economy, but here are some quick fuel-preserving tactics for when you start running low: