Thailand is a truly incredible place, but like much of South-east Asia, driving there can be challenging.

Whether you're planning to drive through Phuket or Bangkok, into the countryside or out to the beaches, find out what you need to be aware of before you travel. 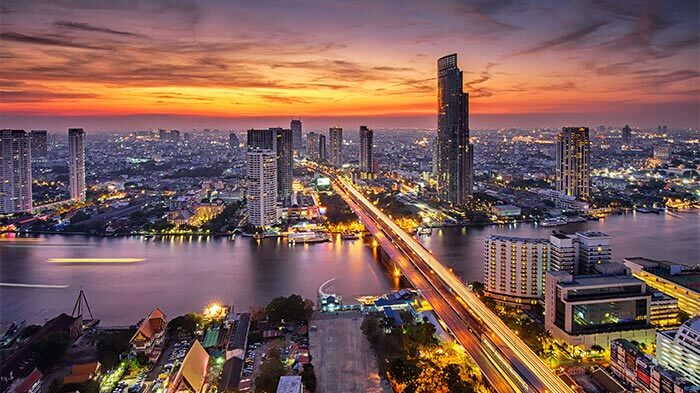 If you’re planning a trip to Thailand you might want a set of wheels to explore the country. So long as you have a valid UK licence that shouldn’t be a problem. Nonetheless, you still need to do some research and prepare yourself before you hit the road.

Some Thai roads are great and others much less so. Thailand’s a developing nation with a wide range of vehicles on the road – including farm vehicles containing animals.

Overloading is common, as are potholes. So, the potential for surprise is everywhere! As a rough rule of thumb, it’s best to be cautious and drive defensively.

Which side of the road do they drive on in Thailand?

Thai drive on the left-hand side of the road, like the UK. So, the steering wheel’s on the right too, which is good news if you’re planning on hiring a car.

People in Thailand tend to speed and zip about. They give you leeway on most roads if you stick to the left and give them room to nip past.

What are the the speed limits in Thailand?

Speed limit signs are expressed in kilometers per hour (km/h).

Around Thai towns and city centres it’s generally 80 km/h or less for cars. On open roads and rural roads the speed limit is 90 km/h while on motorways the limit is 120 km/h.

There are speed cameras and regular checkpoints. But there are question marks over how reliable enforcement is.

Locals and tourists alike are regularly stopped. The Royal Thai Police claim they doubled the number of speeding tickets from 2.4 million in Oct-Dec 2017 to 5.6 million in Jan-March 2019.

Can I drive in Thailand with a UK licence?

Yes, no problem. However, you need an International Driving Permit, but these can be easily bought at most UK Post Offices beforehand.

Take along your photo-card licence plus a passport-style photograph. If you’ve only got a paper licence, take your passport too.

Make sure that your car insurance policy covers you to drive abroad, too.

If you’re going to be in the country for up to a year or beyond it might be a good idea to get a Thai licence. It should make life easier dealing with the day-in, day-out officialdom.

How to get a driving licence in Thailand

Your starting point here is an International Driving Permit as well as your UK photo-card. Having both makes it easier for Thai authorities to speed up the process when you’ve got both.

Depending on your residency status you might be able to get a Thai driving licence within a day via the Thai Department of Land Transport (DLT). But you’ll need to be prepared.

The queues can be long, so get to your nearest DLT branch early!

Usually you watch a one-hour training video of traffic laws. Your eyesight and reaction times might also be tested and you might need to confirm if you’re a temporary resident or not.

As motorcycles are everywhere it might be sensible to get a licence for both motorbikes and cars.

However, if you’ve got only a UK driving licence, you still need written and practical tests for a Thai motorcycle licence.

Some tourist shops will offer to organise a licence for you, but at a massive mark-up.

How safe are Thailand’s roads?

The honest truth is that they’re not that safe, relatively speaking. Thailand has a population of around 70 million – a bit more than the UK's 65.2 million. But around 60 Thais lose their life daily in road accidents, on average.

The two most dangerous times of the year to drive in Thailand are Songkran Festival in April and New Year.

But drink-driving incidents are common. It’s also the time when many city-dwellers return to the countryside, often on two wheels with little protection.

The other ‘New Year’ holiday runs between 27 December and 2 January. The biggest problems are intoxication and speeding. Being distracted while on a mobile phone is also a fast-rising problem.

Sort out your insurance documents

If you’re unlucky enough to have a road accident you might need hospital treatment. Your EHIC or GHIC card won’t cover you here.

It could be worth calling your travel insurance company for advice. A good single or multi-trip policy should protect you for emergency medical and expenses support.

Try and make sure you’ve got their contact details written down.

There’s no central emergency healthcare service in Thailand. Much of the first response system is supported by volunteers – but their training level isn’t high.

If it’s a road emergency do get a full report from the Royal Thai Police. Keep all receipts and paperwork from any treatment you receive.

Most Thai doctors are specialists - and medical and dental care in Thailand has improved enormously in the last 20 years. But treatment can vary hugely.

If you don’t have a good level of insurance then the government hospital experience could be different.

Also, a word on medication. Some prescription medications can have legal issues in Thailand.

It’s a good idea to have a doctor’s note that explains any meds that may carry drug penalties. Thailand has extreme penalties for drug possession.

Take care when renting a car

There are a ton of Thai car hire businesses out there so you won’t have any trouble renting some wheels.

Take plenty of photographs before getting underway so you’ve a record of your car’s bodywork before renting it.

When out and about, keep your licence and rental paperwork close to hand. Local Thai police forces can be hardline or easy going – it’s a bit unpredictable.

Try not to give them the excuse to hand you a fine.

It might be worth looking into car hire excess insurance before you travel, just in case.

Seatbelts are compulsory and if you don’t wear yours you could be fined. Since April 2017 rear passengers also have had to wear seatbelts. This applies to taxis, coaches and mini vans.

Regular overcrowding to maximise earnings and lack of enforcement on more ‘informal’ modes of transport means that there are some mixed public messages.

Thailand has had a compulsory seatbelt law for almost 30 years – yet it’s had relatively little impact.

Don't use a mobile phone

As in the UK (and elsewhere) using a non-hands-free phone is illegal. If you get a ticket for this behaviour then you may have your licence confiscated.

That means a visit to the police station to pay the fine and retrieve your licence.

Be aware of U-turns on main roads

Built into many Thai main roads are U-turn exits. Highway U-turn exits mean queues of traffic building up in the right lane to legally change direction.

This means bigger, heavier vehicles dragging themselves into the middle and right lanes to make an exit. Not good news, especially when it’s raining.

Cheaper to build than roundabouts, these public highway U-Turn could be intimidating if you’re not prepared.

Be aware that local drivers might zip past you without much consideration or indication of what they’re doing. But, rather than trying to match their driving style, stay on your guard.

Keep checking those mirrors. When you pull out, always make sure you indicate.

In towns and city centres it’s a good idea to avoid the left lane. These might regularly be filled with street vendors, parked cars and people loading.

Despite driving on the left, many Thais also give way on the left. Or, the vehicle that has the least speed at the time gives way. So it might be a bit unpredictable.

Take care on intersections here too. Most cars wanting to turn right might simply make a dash for it!

Watch out for roadworks

These are quite often improvised. So take care when driving through, especially if the road warnings are in Thai only. Regular traffic cones can be few and far between.

What’s the drink-drive limit in Thailand?

More than 25% of all Thai road accidents are related to drink-driving. Always err on the side of caution. Drinking in any vehicle is banned.

Can I drive a motorcycle in Thailand?

It’s easy to hire a motorbike in Thailand, but you need a licence from home and preferably an international driver’s permit. If you don’t have one you will need to get a Thai licence.

The rental shop might not ask to see your licence but that doesn’t mean you don’t need it. It’s your responsibility to make sure you’re aware of local rules.

If you’re involved in a motorbike accident and don’t have a licence to ride it, your motorbike insurance might not pay out.

You should also always wear a shirt while riding a motorbike. Police might stop you if you’re not.

Driving in Thailand - at a glance

If you’re planning to drive elsewhere in the world, check out our guide to driving abroad.