It’s hard to believe the Volkswagen Golf has been around for almost half a century. The little car made its debut in 1974 as the successor to the hugely popular Beetle.

More than 35 million cars have since been made, and it's consistently in the top 10 best sellers - beaten only by the likes of the Vauxhall Corsa and Ford Fiesta.

While the model has been updated, modified and improved over the years, it’s managed to retain the cute style that made it a best seller in the first place. 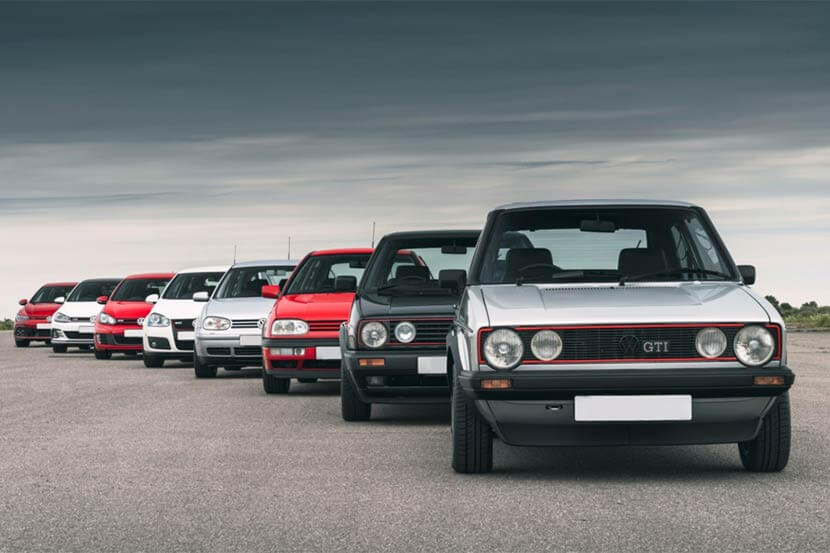 Few manufacturers get the chance to create 8 generations of a model – but that’s exactly what Volkswagen has achieved with the Golf.

There’s also been a Golf to suit virtually everyone’s needs. From families looking to transport children and belongings, to younger drivers wanting an eye-catching convertible.

Over the years it’s won critical acclaim for its designs – as well as picking up 2 World Car of the Year titles.

The standard Volkswagen Golf sits in car insurance group 7 out of 50, meaning that it tends to be on the lower end of the scale in terms of costs to insure. But, depending on the age, cost and power of the model, the price could fluctuate wildly.

So, let’s take a closer look at each of the generations. 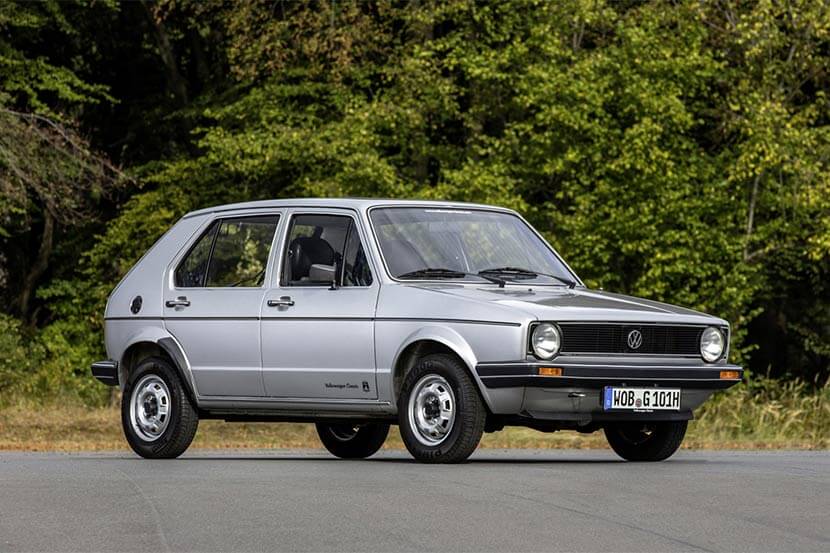 Who doesn’t love a Mk1 Golf? It may have sharper lines in comparison to the smooth styling of today, but it certainly doesn’t look out of place.

The task of replacing the Beetle was handed to Giorgetto Giugiaro. He was a talented designer in his mid-30s who’d created stunning cars for Alfa Romeo and Aston Martin.

His design would be a staggering success.

The first production Golfs rolled off the Wolfsburg assembly line on 29 March 1974. By October 1976, a million Golfs had been made.

Variations also appeared during this period. The first Golf GTi - an iconic performance car - arrived in 1976, and the Golf Cabriolet 3 years later. 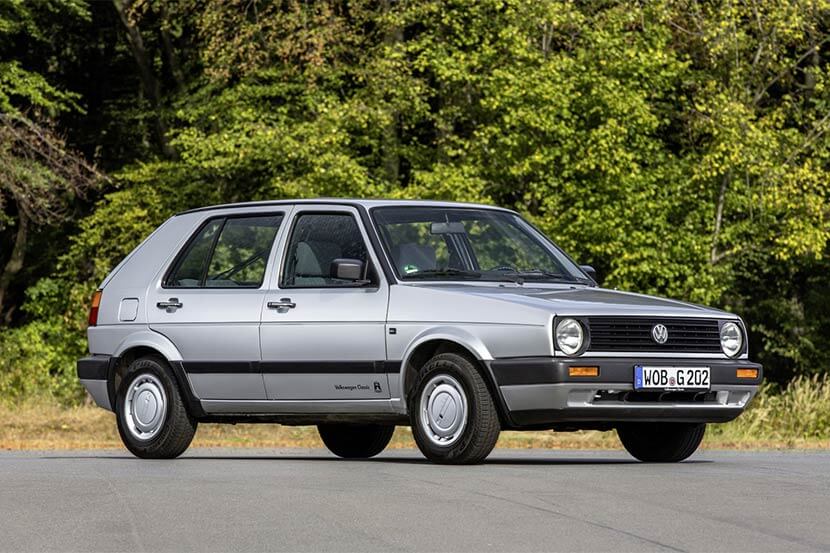 The second generation Golf arrived as the glitzy 1980s were underway. It was bigger than its predecessor and more aerodynamic.

Production started at Wolfsburg in June 1983 - the same month that Rowan Atkinson’s Blackadder was shown in the UK for the first time.

A number of developments and innovations were introduced to this model. These included the regulated catalytic converter in 1984, anti-lock braking system (ABS) 2 years later.

The late 1980s even saw a prototype with an electric drive system.

An impressive 6.3 million Mk2 Golfs had been produced by the summer of 1991. 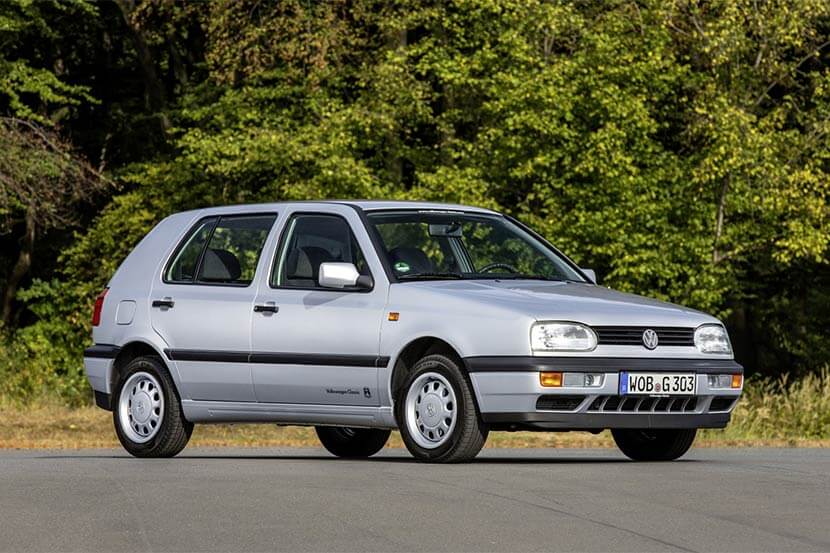 The third generation saw the distinctive round headlights disappear – and a host of technological advances ushered in during this period, including cruise control.

There was a lot of focus on safety. This included front and side air bags. Improvements to the car body construction also improved crash safety.

The first 6-cylinder engine (VR6) also appeared, along with a new convertible and the first Golf Variant, which was an estate.

If you include all the various derivatives, a total of 4.83 million were made. 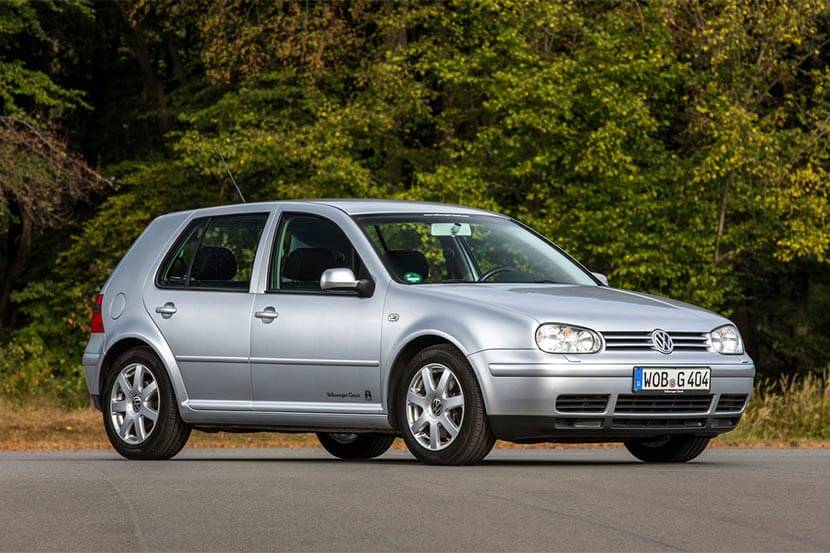 The fourth generation appeared under the guiding hand of Hartmut Warkuß, who was head of design at Volkswagen (Group).

Almost 5 million of these cars were made and it’s easy to understand the enthusiasm. The car’s looks and developments set it apart from the rest.

Particular highlights included Electronic Stability Control (ESC) from 1998, as well as the introduction of the Golf 4MOTION, the first all-wheel drive model with Haldex clutch.

There was also the first standard head airbag in 2002, while the revolutionary dual-clutch gearbox (DSG) was seen a year later. 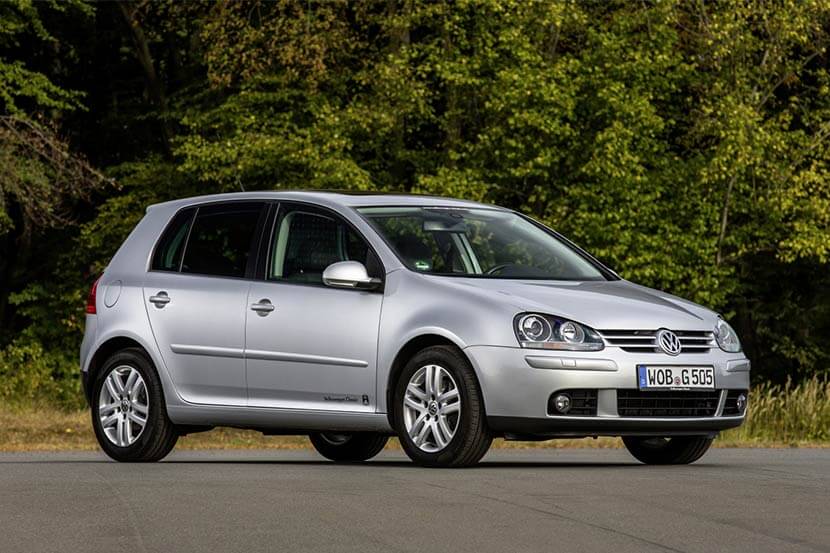 It had taken almost 30 years but the Golf finally overtook the Beetle in 2002.

The gradual evolution of the Golf was clear to see in the early 2000s. Despite the increasingly sleek, aerodynamic looks, it still somehow managed to stay looking like a Golf.

In 2020, Steve Huntingford, editor of What Car? made the case for the MkV to be the best car in the magazine’s history. He pointed out how well the Golf had stood the test of time.

The first turbocharged direct injection petrol engine in the Golf GTI arrived in 2004, and the world's first twincharger turned up in the 2006 TSI. 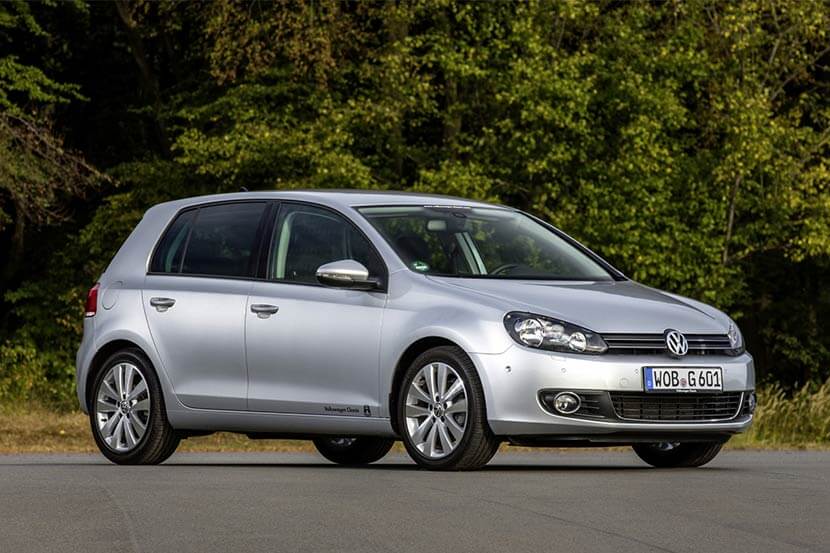 The sixth generation Golf was named World Car of the Year in 2009 – and it’s easy to see why when you consider the advances that were made.

It also had a knee airbag for the driver, illustrating Volkswagen’s focus on providing protection.

This incarnation was also the most advanced Golf of all time, with an impressive list of technological improvements to accompany its sleek looks.

When you factor in all the derivatives, VW produced a total of 2.85 million sixth generation Golfs. 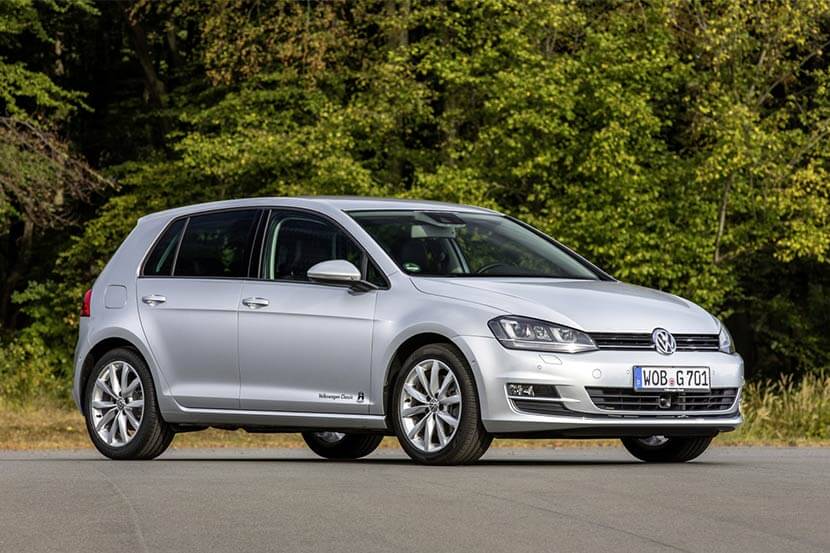 Another version of the Golf – and another award. The Mk7 was unveiled to an enthusiastic audience at the Paris Motor Show in September 2012.

It was lighter, boasted an improved fuel economy, and came with a variety of standard – and optional – assistance systems

There was also a new type of digitised display. The attention to detail resulted in the Golf scooping the World Car of the Year title in 2013, just 4 years after its previous victory.

Given today’s focus on environmentally-friendly vehicles, this period is arguably the most important as it saw the introduction of electrification.

In 2014, Volkswagen brought in the all-electric e-Golf, which could achieve a range of around 190km. This was followed by the Golf GTE with plug-in hybrid (PHEV). 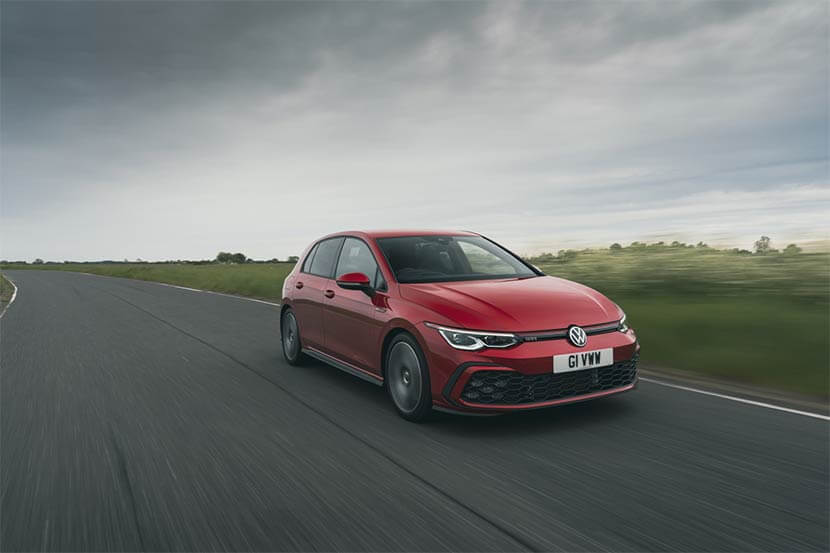 The latest chapter in the illustrious history of the Golf is still being written. The world premiere of the Mk9 happened in Wolfsburg in October 2019.

Top Gear gave the latest Golf an impressive 8 out of 10, and branded it 'a finely polished machine’.

Reviewers found it had better steering, better refinement, better safety, and more modern lighting than previous incarnations. Not a bad list of improvements for a car with such an impressive pedigree.

While still looking like a Golf, the latest model has obvious changes. These include narrower front lights and a leaner grille.

Inside is everything you’d expect from a modern VW. There are intuitive touch controls and a heads-up display that shows your speed and messages from the driver assistance systems. 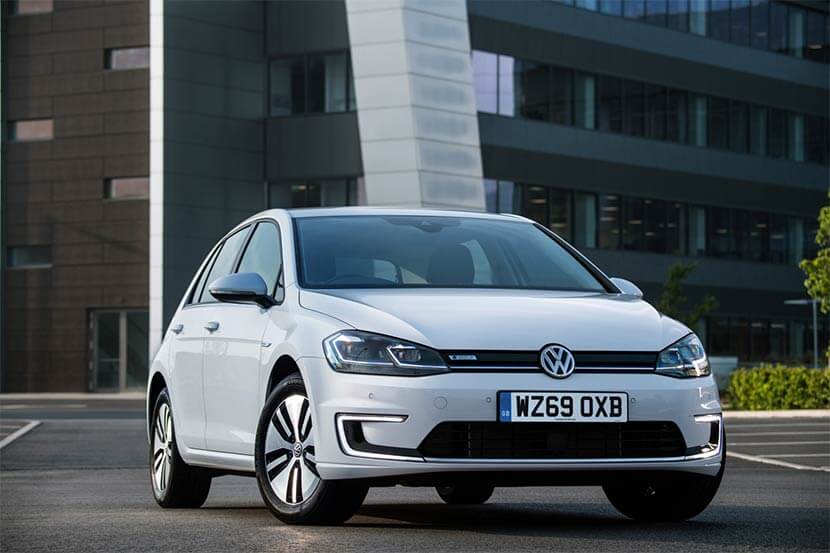 Believe it or not, Volkswagen has been creating electric cars since the 1970s, but the first electric VW Golf didn't appear until 1981. The company also developed a Mk1 hybrid car in 1983.

These were still concept cars, however. The first production electric car from Volkswagen was the Golf III CitySTROMer, which was available between 1992 and 1996.

After a further 2 decades of development and innovation - including a car fuelled by woodchips - the e-Golf hit the market in 2013. It boasted a range of 81-118 miles.

An update to the model in 2017 improved power and fuel efficiency, increasing its range to 89-125 miles.

The first production hybrid Golf GTE was unveiled at the 2014 Geneva Motor Show, which had subsequent updates in Mk7 and Mk8. The Mk8 version became available in 2021, and has an 'all-electric' range of 40 miles.

A model that has stood the test of time

By any measure, the Golf has been an overwhelming success and will go down in the history books as one of the most enduring cars of all time.

The sheer number of Golfs made also means there’s plenty of choice.

It doesn’t matter if you’re looking to buy the latest out of the showroom, or a Mk1 that’s been on the road for decades. There should be a Golf to meet your needs.

Now it’s a case of waiting to see what VW come up with for the Mk9 generation!

Given the global shift to electric cars and the upcoming UK ban on new petrol and diesel cars in 2030, there was some speculation as to whether a Mk9 was on the cards.

Volkswagen announced in early 2021 that it would produce a new version of all of its flagship models, including the Golf.

“We will still need combustion engines for a while, but they should be as efficient as possible, which is why the next generation of our core products – all of which are world models – will also be fitted with the latest generation of plug-in hybrid technology, with an electric range of up to 100 kilometers.”

Based on the normal VW Golf production cycle, we might expect to see a Mk9, which is expected to be a crossover car, in the mid-2020s.