Parent and child parking bays are vital for drivers with young children. But not everyone respects the restrictions on these bays. Almost 1 in 10 people have parked in a parent and child space when they haven’t had a child with them. Understandably this is irritating for parents, but why is it happening? 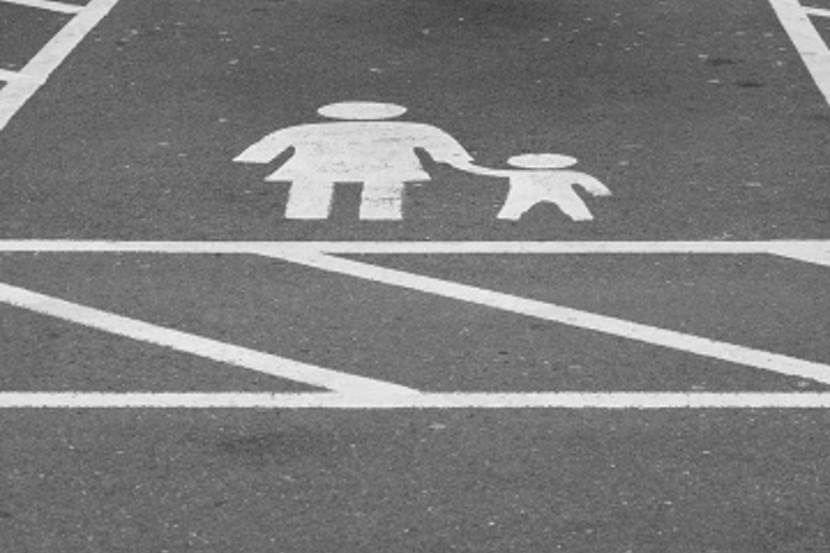 Why do parents need dedicated parent and child parking bays?

Regular spaces simply don’t have enough room for manoeuvring children in and out of a car.

Almost 1 in 2 parents struggle to get their child out of the car because they don’t have enough room in a regular parking space.

Parent and child bays benefit parents because it allows them to safely:

Having to work prams and pushchairs in with a regular space increases the risk of damaging the cars next to you. This might result in the other person claiming on your car insurance.

The bays are also closer to the store entrance so parents don’t have to walk or carry their child through a busy car park. But, because of others misusing these bays, more than a third of parents have had to do just that.

Over 1 in 5 said they saw a car speeding past them after having to park in a regular space, putting their child at risk.

Who can use a parent and child parking bays and is there an age limit?

The rules might vary between stores, but the general rule is:

You can park in a parent and child bay if you’re visiting the store with a child that’s under 12 or in a car seat.

If there’s any signage that says otherwise, go with that instead.

If your child isn’t going to leave the car, then think about whether you really need to use the space.

Why are people misusing parent and child parking bays?

We asked the public why they misused parent and child parking bays. Their reasons for misusing the bays were:

In 2022, we visited 650 supermarkets across England, Wales and Scotland to see how bad the parent and child parking problem was.

We carried out spot checks in different supermarkets and our researchers took note of whether a driver left the car with or without a child.

They discovered that 1 in 3 people misused parent and child parking bays – with the most happening at Asda.

Regionally, the highest amount of incorrect parking occurred in the North East, with 2 in 3 people misusing the bays.

The lowest was in the South West, with less than 1 in 10 people parking incorrectly.

Parent and child parking bay law: what are the rules?

Parent and child parking bays are commonplace in supermarket car parks. Most of these are private property.

As such, there are no official government or council-level rules on parent and child parking in the same way you’d get for disabled parking spaces.

Parking in a supermarket car park is managed and enforced by the supermarket itself, or by a private parking management company.

That means it’s not illegal to park in a parent and child space without a child. But you could get a Parking Charge Notice (PCN), the same as you would if you overstayed in a car park.

We use the term ‘fine’ here, but in reality it’s an invoice. They’re not the same as Penalty Charge Notices (also, confusingly, PCN) that you’d get from the council for driving in a bus lane, for example.

The main difference between the two is that Parking Charge Notices - the ones supermarket car parks use - aren’t backed up by law.

If you feel that you’ve been wrongly penalised, you can appeal the parking fine.

The way supermarkets monitor parking varies between each store, but here’s a basic run down:

The particular store enforces parking rules and handles any misuse. The car park operators would issue any fines to those found breaking the rules.

An external agency monitors Asda’s car parks. They carry out regular checks to enforce their parking regulations. If someone has parked incorrectly they could get a parking charge.

If someone parks their car incorrectly they’re politely asked to move, or a sign is placed on their windscreen.

An external agency might issue a parking charge notice (PCN) to anyone wrongly parked.

If a customer has noticed someone misusing a parent and child bay they’re encouraged to report it to the store manager. However, they’re unable to enforce this as there are limited staff in store.

Lidl monitor the use of parent and child parking bays. They say that they strongly rely on the honesty of customers to park correctly.

Can Blue Badge holders park in parent and child spaces?

So, if a Blue Badge holder parks in a parent and child space, it’s not illegal.

Whether or not supermarkets allow Blue Badge holders to park in parent and child spaces is another matter.

If you’ve any concerns, your best bet is to speak to someone in the supermarket and ask them if you can use the parent and child bay. It’s better than risking a fine.

Nearly 1 in 10 said they parked in a parent and child parking bay because they were travelling with a Blue Badge holder. They said that at the time of parking, there wasn’t a space available in the Blue Badge bays.

Can you park in parent and child parking bays if you’re pregnant?

It’s unclear whether pregnant women can use these spaces as signs specifically refer to parents with children.

And because these car parks are private property, each store is free to set their own rules on how people use their car parks.

When asked, Tesco was the only store to mention pregnant women:

"It's up to the store whether they penalise a pregnant woman for using the parent and child parking bay."

Thinking about why these spaces exist, they provide extra space to safely get your child in and out of the car.

And, if you’re travelling with a bump, that extra wiggle room could come in handy.

If you’re pregnant and feel you need the extra room, it’s worth asking the store whether you can park in these bays.

What should I do if I see someone misusing a parent and child bay?

Instead, go into the store and inform a staff member that you suspect someone is misusing the bay.

Give them the make, model, colour and registration number of the car.

If you don’t want to speak to someone in person, you can contact the store online.

*Figures taken from omnibus research carried out by OnePoll on behalf of Confused.com. This was a nationally-representative poll of 2,000 UK adults. The research was conducted between 16 and 21 June 2022.