In 2019, the transport sector accounted for 34% of the UK’s total carbon emissions, according to the government. It’s also the country’s largest producer of emissions.

The UK has set itself an ambitious target to become a zero-carbon country by 2050, but we won’t reach that target unless the government takes greater action.

To that end, Highways England has cut the speed limit on certain sections of motorway to 60mph while Wales has expanded its network of 50mph zones.

But one in four (26%) people think it’s not worth the inconvenience.* 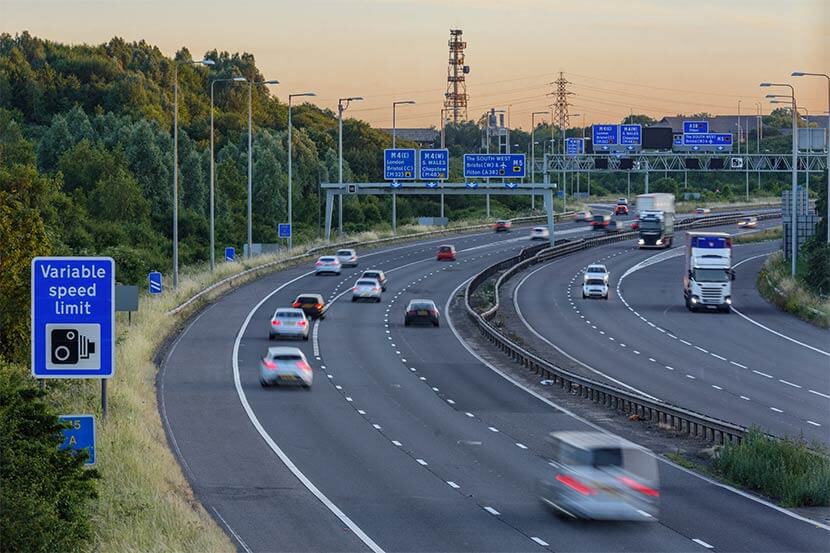 How does speed impact carbon emissions?

Speeding up requires power, which burns more fuel. Slowing down uses the brakes, which give off harmful brake-dust particles.

With constant speeding up and slowing down on the motorway, you can see how pollution can build up fast.

Cutting the speed limit to 60mph rather than 70mph means less acceleration. This means less fuel consumption and fewer emissions.

Highways England estimates that a 60mph speed limit on the motorway could cut emissions by as much as 17%.

Where are the 50mph zones in Wales?

In early 2021, a new average-50mph zone was introduced on the M4 between junction 24, Coldra, and junction 28, Tredegar Park.

But this wasn't a new initiative for Wales. In 2018, five stretches of road had their speed limits cut to 50mph because of emissions:

Emissions in those areas fell enough that the new speed limits became permanent in 2019.

Where are the revised speed limits in England?

They're on four stretches of motorway around Birmingham, Manchester and Sheffield:

Highways England has identified another four areas with poor air quality, but these roads already have speed restrictions in place for other reasons:

The lower speed limits will be in force 24 hours a day during the trial.

No, the speed limit applies to all vehicles.

Even though electric cars have zero emissions, they still need to stick to the new speed limit for safety and practical reasons. Having one rule for EVs and another for everyone else could cause confusion.

Ivan Le Fevre, head of environment at Highways England, said: “Ultimately the air quality challenge will be solved ‘at the tailpipe’ by vehicle manufacturers and changes in vehicle use.

“Until this happens, we will continue our extensive programme of pioneering research and solutions.”

What do Brits think of the trial?

We asked 2,000 people whether they thought cutting motorway speed limits was a good idea.

More than half (53%) say that drivers wouldn't obey the lower limits. And more than a quarter (28%) believe the government should do more elsewhere to lower emissions.

But nearly a third (32%) think that cutting motorway speeds is a good way to help the environment.

How can I reduce emissions when I drive?

Reducing your speed is one way to keep your emissions down.

But if you want to do more, here are some tips:

You might think these tips sound an awful lot like how to improve your fuel economy. That’s because they are!

If you improve your fuel economy, your car burns less fuel. Fewer emissions are pumped into the air, and you save yourself some cash by not topping up as often.

This defensive style of driving is also safer, leading to a lower risk of making a claim in your car insurance policy.

You can find out how much your journeys are costing you with our fuel cost calculator.

It’s important you know your speed limits. Breaking the speed limit is breaking the law, and as well as being dangerous you can be hit by a hefty fine, or be disqualified from driving.

National speed limits vary depending on what vehicle you are in.

The government publishes a full list of all the limits, but for cars and motorbikes weighing up to two tonnes, the national limits are:

These are speed limits that are shown by a number inside a red circle on a road sign as you enter the speed limit zone. The limit remains in force until another sign tells you otherwise.

Local authorities can set their own speed limits – many towns and cities have 20mph zones, for example.

You should keep an eye on the signs at all times because the speed limits can change regularly over short distances – around schools, for example.

Variable speed limits are becoming more common thanks to the increased rollout of smart motorways. It means that the speed limit can be adjusted depending on factors such as traffic flow and congestion, so you should never assume that just because you could do 70mph yesterday, you can definitely do 70mph again today.

If you see a blue circular sign containing a number, that indicates there is a minimum speed limit – you shouldn’t go any slower than that.

These are mainly used in places where it’s important that traffic keeps flowing, such as in tunnels.

What are restricted roads, motorways and dual carriageways?

These are roads in built-up areas, and it can sometimes be unclear what the speed limit is if you haven’t been paying attention to the road signs.

Usually, though, if you can't see any speed limit signs and there are buildings and street lights alongside the road, the speed limit is 30mph.

If the limit is something different, such as 40mph, you can expect to see regular reminders of that.

*Figures taken from omnibus research carried out by OnePoll on behalf of Confused.com. This was a nationally-representative poll of 2,000 UK adults. The research was conducted between 11 and 15 November 2020.