Skip navigation
Retrieve a Quote My account
You are here:
18 Sep 2018

Autonomous cars: Why we should stop & think before we're sold the self-driving dream 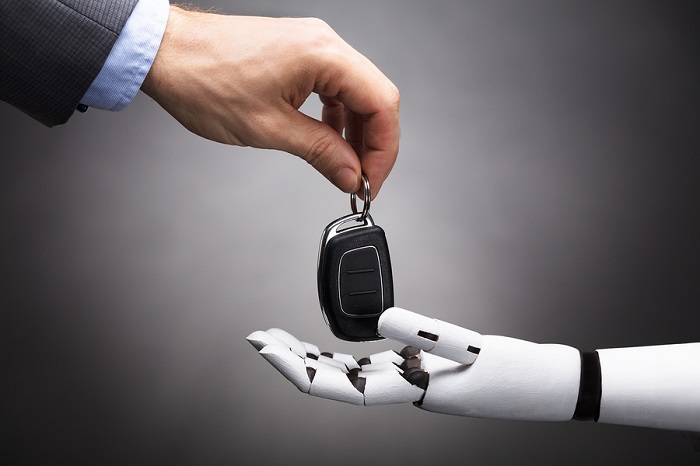 Safer roads. The end of congestion. More free time for travellers. The introduction of self-driving cars promises all this and more. But how likely are these scenarios to become reality? What are the potential costs – and are they worth paying?

Last year, Chancellor of the Exchequer Philip Hammond said he aimed to have fully driverless cars on Britain’s roads by 2021.

Meanwhile, industry has been busy at work, with technology companies and carmakers alike vying to be the first to get self-driving cars on the road.

There are some obvious incentives in this drive towards autonomy, not least safety.

Human error has been cited as a causal factor in 90-95% of road traffic accidents, according to a House of Lords Science and Technology Select Committee report [2017].

Eliminating this from the driving process has the potential to save countless lives.

Read more: The 5 best sat navs on the market 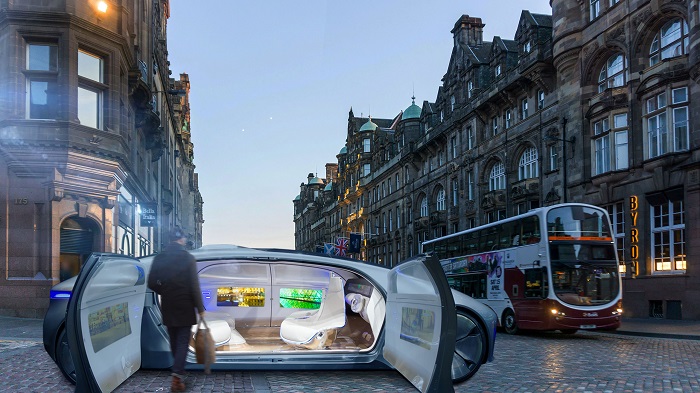 
Other potential pros include less congestion, improved mobility for elderly and disabled people, and, without the distraction of driving, more time for road users to do other things instead. Like read, perhaps, nap or, more likely, go online.

But despite such opportunities, getting to a point where self-driving cars can safely navigate the road network and integrate with vehicles that are controlled by people is a massive challenge.

Recent media coverage, such as the case involving a self-driving Uber that killed a pedestrian in Arizona, has highlighted just how difficult this is likely to be.

In light of such uncertainties, the government target of 2021 seems particularly ambitious.

And even if this is achieved, will autonomous vehicles really benefit society in the ways we’re hoping for?

Stu McInroy is chief executive of the Road Safety Markings Association. He argues that there are still many issues to be resolved before self-driving cars rule the road.

“This is not going to happen quickly,” McInroy says. “My concern is that government probably hasn't as yet fully understood and embraced the challenges of how we get there by way of the supporting infrastructure that would be required.”

One of the key pieces of infrastructure is road markings.

At present, most autonomous vehicles navigate using technology called optical sensing, which is currently used in safety systems such as lane assist.

Optical sensing relies on a camera which monitors the likes of road markings to help the car to navigate safely.

This reliance on optical sensing, and therefore on the quality and visibility of road markings, presents some significant problems, says McInroy.

“The road markings in the UK tend to be refreshed on a six- to eight-year basis, and given the financial strictures that have been placed upon local authorities and the like across the country, that period is being extended.

“Of course, the result is that if lines aren't replenished, refurbished or replaced, they lose reflectivity.”

McInroy says in the worst cases these road markings “get worn away to such an extent that they can't even be seen by a human eye, never mind the optical sensors of a vehicle”.

Matthew Avery, head of research at car safety group Thatcham Research, agrees the transition towards autonomy is likely to be problematic.

“If we could make all autonomous vehicles fully autonomous overnight then there wouldn’t be the difficulty,” he says. “The transition phase is the dangerous bit.”

In 2014, the US-based Society of Automotive Engineers identified six levels of automation.

Cars with Level 4 technology and upwards are generally regarded as fully autonomous, or self-driving.

But car manufacturers are already bringing out cars with Level 3 technology that, in certain conditions, can control many aspects of driving, such as braking, accelerating and even steering. 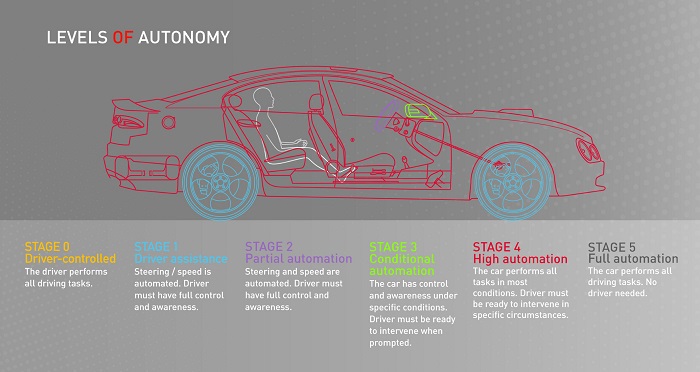 
According to Avery, this new technology is confusing many car-buyers into thinking their vehicles can fully drive themselves when they can’t.

“We’re starting to see real-life examples of the hazardous situations that occur when motorists expect the car to drive and function on its own.

“Specifically, where the technology is taking ownership of more and more of the driving task, but the motorist may not be sufficiently aware that they’re still required to take back control in problematic circumstances.

“Names like ‘Autopilot’ or ‘ProPilot’ are deeply unhelpful,” Avery says, “as they infer the car can do a lot more than it can.”

He argues that “absolute clarity” is needed to help drivers understand when and how these technologies are designed to work, and that they should always remain engaged in the driving task.

“Fully automated vehicles that can own the driving task from A to B, with no need for driver involvement whatsoever, won’t be available for many years to come,” says Avery.

“Until then, drivers remain criminally liable for the safe use of their cars and as such, the capability of current road vehicle technologies must not be oversold.”

Caught in a jam

Even if such issues are addressed, as in time they may be, there is still the problem that the first fully autonomous cars will have to mix with vehicles controlled by human drivers.

He gives the example that when making decisions on the road, such as, “can I pull out in front of this vehicle?” we look into the eyes of the other driver to see if he will let us go.

“That process you do as a human, AI can’t do yet. And, although it will get there, the first self-driving cars are likely to be really cautious.”

Avery therefore wonders whether travelling in a self-driving vehicle would be frustrating rather than relaxing.

“For example, [an autonomous vehicle] might leave a large gap between it and the car in front, but another car being driven manually may seek to fill that gap.

“And so the car will readjust and move further backwards to keep the gap, giving the passenger the feeling he or she is going backwards or not making progress,” he says. 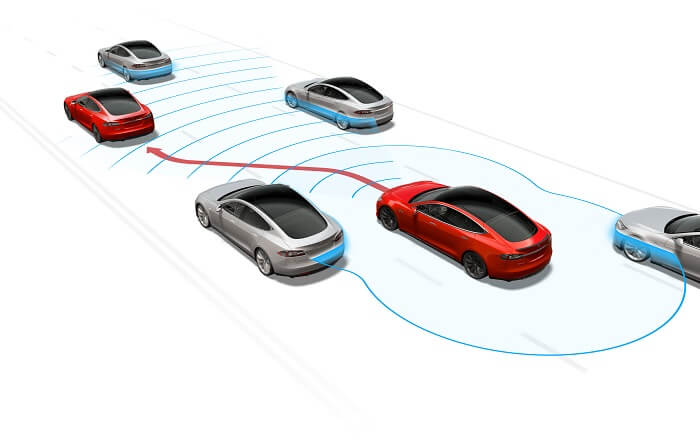 Of course, just because something is difficult to do, doesn’t mean it shouldn’t be done.

But in this case, will the introduction of self-driving cars actually solve many of the problems we hope they will? In short, is it all worth it?

One person who thinks self-driving cars shouldn’t be held up as the transport equivalent of the Holy Grail is Dr Ian Walker, an environmental psychologist at Bath University.

“There’s this huge list of problems we have and in the best possible science-fiction scenario, automation can’t fix most of them,” he says.

“And so I think we need to be incredibly careful for a couple of reasons: one, it might just make everything worse.

“But second, there is a real danger, and I’m seeing this occur more and more, that all of today’s problems are being batted 30 years down the road.

“We’re failing to address urgent, pressing problems because of this vague promise of a messiah that’s going to come along in the future and fix everything,” he adds.

READ MORE: Could our cities adapt to become carless in the next twenty years?

One of the main issues, according to Dr Walker, is the car manufacturers themselves.

“At the moment, the car manufacturers’ business model is to sell you one car per person. And so we have multiple-car households, with vehicles that are sat about doing nothing most of the time.”

Instead, he says: “Probably the only system that really makes any sense is to have a small number of self-driving cars that are shared. But that requires car manufacturers to completely change their business models. And it’s unlikely they’ll do that spontaneously.”

Although some manufacturers have talked about shared mobility, Dr Walker cites Ford as an example. He says: “It’s such a mind shift of 100 years of simply selling everybody a car that I’ll believe it when I see it”.

As for our original question, is it all worth it? Are we on the road towards a self-driving dream or nightmare?

It really depends on what we’d like autonomous cars to achieve.

Fully autonomous vehicles, once they eventually arrive, are likely to lead to a significant reduction in fatalities. So in that respect, the drive towards autonomy is definitely worth it.

And in the long term, traffic congestion should become significantly less too.

However, both these outcomes could arguably be achieved by simply having fewer cars on our roads, perhaps through a combination of both shared mobility and encouraging people to take fewer journeys by car.

Therefore, before we’re sold the self-driving dream, we should think carefully about what we’d like this technology to do for us.