Island hopping around Greece on board a smoky 1950s boat isn’t the only way to see the country.

Taking to the road is the perfect way to enjoy the Mediterranean climate and the rich history of Greece.

Thankfully, the quality of the roads has improved somewhat since the Romans took over in 146 BCE.

Nowadays, a good quality network of national roads makes it easy to criss-cross the country in search of ancient attractions.

Impact of Brexit on driving abroad

The UK is no longer part of the EU.

We're now in a transition period until the end of 2020 while the UK and EU carry out negotiations.

Until then, the current rules for driving abroad won't change.

For more information on travelling in 2021 and beyond, visit GOV.UK.

The Greeks are relaxed drivers. You won’t find too much tailgating or horn-honking, but neither can you expect much attention to signalling or priority signs.

Keep your wits about you, both hands on the wheel and just go with the flow. You can also expect big differences in speeds between vehicles.

The drink-drive level is strict, with a 50mg limit per 100ml of blood compared to 80mg in the UK, so stay away from the Ouzo.

Service stations are few and far between once you’re out of town, so fill up whenever you see one.

Always carry a first-aid kit and warning triangle, as well as a fire extinguisher - all cars are required to have one. 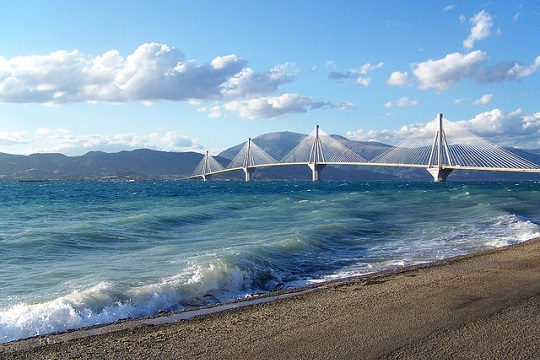 Take a trip across the Rio-Antirio Bridge, which connects the Peloponnese peninsula with mainland Greece.

It’s the longest cable suspension bridge in Europe at just under 1.4 miles, and takes you straight into the town of Rio and its delightful beaches.

Best of the rest

As well as being the capital, Athens is also the location for most of the stages of the World Rally Championship.

Head up into the mountains to enjoy the sinewy roads and spectacular views, and pretend you’re a Formula One driver for the day.

Laws of the land


If you get fined by the police, they’re not allowed to collect the money on the spot. Instead, you must pay at a public office within 10 days.

Street parking laws are very strict - you can’t park facing traffic, close to a bus stop or near a fire hydrant.

Park illegally, and instead of getting a ticket you may have your number plates removed.

This generally applies to Greek-registered vehicles, but you can imagine how difficult it would be to trek back across Europe without any plates.

Planning on driving to another country? Take a look at our section on driving abroad.

Beat the humdrum of your daily commute with a virtual drive along one of the most beautiful roads in the world.