Sales of totally electric cars took off last year, with more registered in 2020 than in all the previous years combined. 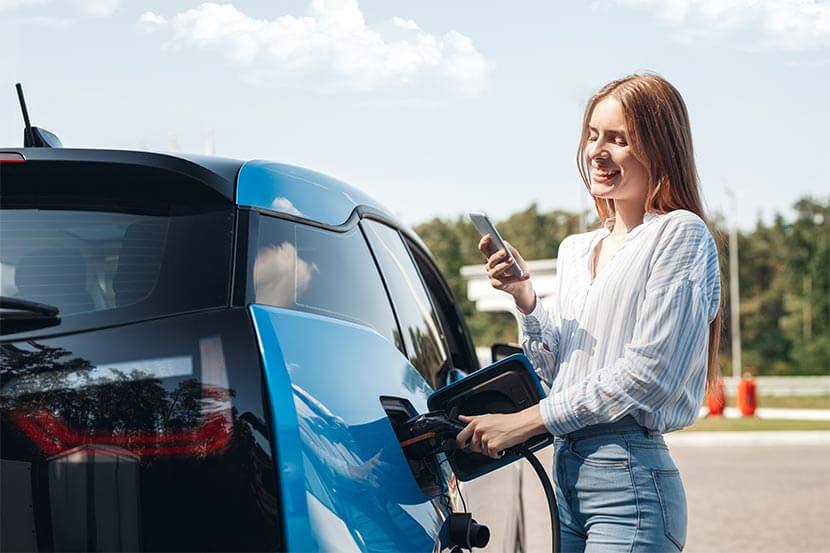 So what do you need to consider before you join the electric car revolution?

Here, the engine is the main power source but the car can also run on just the battery or on engine and battery together. The battery gets recharged in the course of normal driving.

The original Prius is probably the most famous of this type of car.

These have bigger batteries than HEVs so can travel further on just battery power.

The Mitsubishi Outlander PHEV is a popular example of this.

What ultra-low emission vehicles are available?

Are there incentives to buy an electric car?

Although the government isn’t as generous as it used to be, you might still get a discount on new low-emission vehicles.

Vehicle dealerships and manufacturers get a grant from the government so the discount should be reflected in the list price. The maximum grant available for cars is £2,500.

To qualify, vehicles have to have CO2 emissions of less than 50g/km and be able to travel at least 70 miles without any emissions at all:

To be eligible for the grant, cars must cost less than £35,000, including VAT and delivery charges.

What vehicles are eligible for a grant?

As well as cars, other electric vehicles such as electric motorcycles and electric vans can qualify for what is known as the plug-in vehicle grant.

Not all low-emission vehicles get a grant. For the full list, check out GOV.UK.

How can I make getting a charge point more affordable?

If you want to install an electric vehicle charging point at your home the government could help pay for this as well.

The Electric Vehicle Homecharge Scheme pays up to 75% of the cost of putting a charging point in your home. The maximum grant is £350.

Is it easy to find a charging point for an electric car?

As of 1 July 2021 there were 24,374 public electric vehicle charging devices available in the UK. Of these, 4,551 were rapid chargers that can fully charge a car in a little as an hour.

Since 2015, the number of public devices has grown by 44% per year, on average. Rapid devices have increased at a much higher rate, with an average annual increase of 62%.

Taking the average domestic electricity price as being 17p per KWh it would cost about £9.00 to fully charge a typical 60KWh battery at home.

And if you’re on a longer trip, motorway service stations offer charging points. But like motorway fuel, this could be a more expensive option.

The time it takes to fully charge an electric car from empty will depend on the car battery and the type of charger.

Often used to charge an electric car overnight, these will take around eight to 10 hours for a full charge.

These tend to be found in places such as supermarket car parks and houses with off-street parking. A full charge can be done in three or four hours.

The fastest charging points are those on Tesla’s Supercharger network, which is just for Teslas.

Generally, it’s a good idea to think of an electric car as being like a mobile phone and do the main charge overnight and top it up during the day.

In general, cars lose about 60% of their value over a three-year period. While some of the higher-end models like Tesla tend to stay pricey, EVs seem to follow a similar trend.

Are electric cars expensive to service and repair?

This depends. Electric cars have fewer bits to go wrong than internal combustion engine (ICE) cars but the bits tend to be more expensive. They also might need specialist garages.

The cost of replacement batteries is obviously a concern and manufacturers recognise this and might offer warranties. These cover the battery for a set number of years or miles.

Is it more expensive to insure an electric car?

At the more affordable end of the market, electric car insurance could cost about the same as traditional car insurance.

From October 2021 only EVs will qualify for the 100% discount on the congestion charge in London.

The discount is currently much wider. It applies to vehicles that meet Euro 6 standards and emit no more than 75g/km of CO2 and have a minimum range of 20 miles of zero emissions.

Car tax bands for hybrid electric cars depend on when the car was registered, its cost and its emission levels.

Electric cars can be worth considering as company cars as they attract the lowest tax bands for benefits in kind.